Special thanks to The Mitchell Library in Glasgow, Scotland for sending me this 1915 news article that ran in the Evening Times Roll of Honour announcing the death of Private David Athya, my husband’s great-uncle. 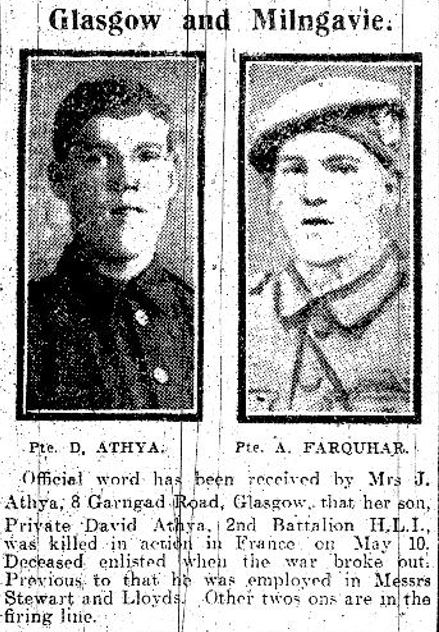 Official word has been received by Mrs. J. Athya, 8 Garngad Road, Glasgow, that her son, Private David Athya, 2nd Battalion H.L.I., was killed in action in France on May 10. Deceased enlisted when the war broke out. Previous to that he was employed in Messrs Stewart and Lloyds. Other sons are in the firing line.

Although just a short paragraph, the article is full of details—his mother was alive, her address, the military unit David served in, where and when he died, where he worked, and confirmation that his two brothers served during World War I (which we knew but you need to prove). According to Wikipedia, Stewarts and Lloyds was a steel tube manufacturer.

Article/photo credit: Evening Times Roll of Honour and The Mitchell Library, Glasgow, Scotland
Posted by Denise at 9:59 AM