Today I remember a family member who made the ultimate sacrifice for our freedom. 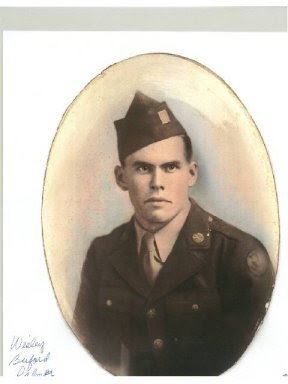 By April 17, 1930, Wesley and his family had moved to Tennessee where they lived on Highway 58 in Civil District 2 of Meigs County. His father was a laborer in a saw mill. At age 30, his mother was unable to read or write. By 1935, Wesley’s family had moved back to Georgia, living in Whitfield County.

On April 19, 1940, Wesley and his family lived on Chatsworth Road in Dalton, Whitfield County, Georgia. Wesley was a laborer on a farm. His father was a life insurance salesman, his mother and sister Viola were machine operators in a bedspread factory, and his brother Robert was a gas station attendant.

On December 7, 1941, the Japanese bombed Pearl Harbor in Hawaii and America entered World War II. A year later (December 31, 1942), Wesley headed to Fort McPherson in Atlanta, Fulton County, Georgia and enlisted as a private in the U.S. Army. His enlistment records show that he had a grammar school education and was semiskilled in the fabrication of textile products—not surprising since Whitfield County is known for its textile and carpet mills. Wesley, who was 5’6” and weighed 150 pounds, was married to a woman named Marie, last name unknown, at the time. 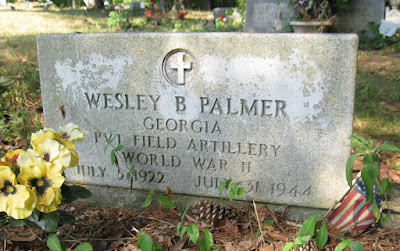 In 1943, the fighting continued in Europe with many battles being fought. Back home, Americans were rationing shoes, food, clothing, rubber, metal, and fuel. Franklin Roosevelt and Winston Churchill began planning the Battle of Normandy, an invasion in France that Wesley would take part in with his unit, the 821st Tank Destroyer Battalion. The Invasion of Normandy was launched on June 6, 1944. Wesley survived the landing but was killed in action on July 31, 1944 during the engagement at Villebaudon, which is in the Manche, Normandy region, in the north of France.

At the request of his family, Wesley’s body was brought home to Georgia for burial at Bethel United Methodist Church Cemetery in Dalton. His mother applied for a flat granite military headstone on June 14, 1949. The stone was transported to Kenemer Brothers Funeral Home who handled the arrangements for placement on his grave.


Wesley’s death came just five months after his paternal first cousin, John Billy Shields, was killed in Italy on February 26, 1944 as his landing barge came ashore in combat during the Battle of Anzio.


“Those who have long enjoyed such privileges as we enjoy forget in time that men have died to win them.”