[Note: When I wrote the blog post for Millicent Virginia Overton, I inaccurately recorded the children of Abijah and Elizabeth Rhodes. I have corrected that blog post and hopefully have it correct here.]

Julia’s family lived in District 166 of Newton County, Georgia in 1840. The census enumerator recorded two males under 5, one male under 10, and one male under 40; there were three females under 10 and one under 30.

On September 26, 1850, Julia and her family lived in Subdivision 65 of Newton County, Georgia. At 14 years old, she was enumerated as Ciphorna. Her father, enumerated as Elijah rather than Abijah, was a farmer with real estate valued at $1500. Julia married Hansford D. Woolley, son of Basel Woolley and Susannah Cumbaa, in Newton County, Georgia on June 15, 1858. Their only child, a son they named John L. Woolley, was born in Conyers, Rockdale County, Georgia on August 24, 1859.

On July 18, 1860, Julia, Hansford, and baby John lived in Conyers. Hansford was a carpenter with a personal estate valued at $800. Tragedy came to the Woolley home when John died in Conyers on March 30, 1861, five months before his second birthday. John was buried at the Old Conyers City Cemetery. The tragedy didn’t end there though. Sadly, Julia died two weeks later in Conyers on April 15, 1861—the same week the American Civil War began. She was just 26 years old. Julia was buried at Old Conyers City Cemetery beside her son John. I can only imagine that their death was the result of some horrible disease. Julia’s tombstone reads: To the memory of Julina S. Woolley, born Jan 15 1835, died April 15 1861. 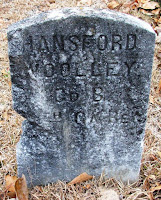 Hansford, likely still grieving the loss of his family, enlisted as a private in Company B of the 18th Georgia Infantry Regiment on October 2, 1861. Hansford was wounded somewhere in the Richmond, Virginia area and sent to a hospital in Richmond where he died in service on April 29, 1862. He was just 30 years old. Hansford’s brother Elias brought his body back to Georgia for burial with his wife and son in Old Conyers Cemetery, bringing a tragic end to Julia’s small family.