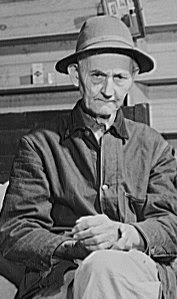 Bob’s father was originally from Sumter, Alabama and served in Company H of the 8th Texas Cavalry (AKA Terry’s Texas Rangers) during the Civil War. His mother had a twin sister named Georgia A. J. Mullins.

On June 18, 1880, Bob and his family lived in District 146 of Greene County. His father was a farmer, his mother was keeping house. His sisters Talula and Carrie and his brother Jack were attending school, however, at age six, Bob was not.

On October 27, 1897, Bob married Alice Beman Lankford, daughter of James C. Lankford and Mary Ann Wilson, in Greene County. John S. Callaway performed the ceremony which was recorded by James H. McWhorter, Ordinary. Together they had one son, a boy they named Homer Crawford Callaway. Alice already had a son named Carroll Harvey Lankford (my grandpa) when she married Bob. I won’t go into the details of his birth here but if you’re interested, you’ll find the blogpost I wrote about Alice here. I’m sure my grandpa’s birth brought great shame to Alice at the time and therefore he was never fully acknowledged as her oldest child. This was something he had to live with his whole life. 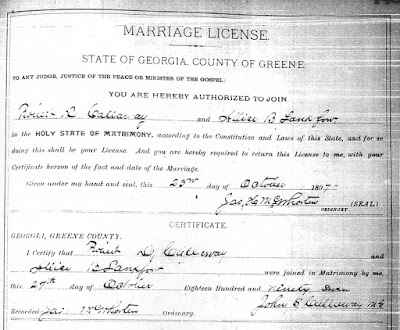 On June 9, 1900, Bob, Alice, and their one-year-old son Homer lived in Woodville, Greene County, Georgia. Bob, who was unable to read or write, supported his family on a rented farm. His wife Alice was enumerated as the mother of one living child, which was incorrect.

On May 10, 1910, Bob and Alice still lived in Woodville. They had been married for 13 years. Bob had learned to read and write since the last census was taken. The census enumerator recorded Alice as the mother of two children this time, both of which were living. In fact, both boys were living in the home—Homer (age 11) and Carroll (age 19). My grandpa was enumerated as Carrel L. Callaway this time around. Both Bob and Carroll were farmers on a general farm.


Bob’s half-sister Eulilla died on April 13, 1911, most likely in Greensboro, Greene County, Georgia at the young age of 19. She was buried at Greensboro City Cemetery there in Greensboro. The following year, his father Lemuel died in Greensboro on July 22, 1912. I’ve been told (but haven’t found any proof yet) that Lemuel was working for the Georgia railroad as a night watchman at Carey Station when he died. Someone played a prank on him and turned the red light so the train would stop. Lemuel was walking the trestle to turn the light so the train could pass when the train hit and killed him. Lemuel was also buried at Greensboro City Cemetery.

On September 12, 1918, Bob was 43 years old and living in Greensboro when he registered for the World War I draft. He listed his occupation as farming and his nearest relative was his wife, Mrs. Alice Callaway. Bob was of medium height and build, had grey eyes, and light hair.


On January 2, 1920, Bob and Alice lived on a rented farm on Penfield Road in Penfield, Greene County, Georgia. Bob was a farmer on a home farm and Alice was a farm laborer. Their son Homer and his wife Lou Emma (Armour) lived next door.

On April 25, 1930, Bob and Alice lived in Penfield. Homer, Lou Emma, and their six-year-old son Dawson were living with them. Both Bob and Homer were a laborer in a saw mill.

On April 15, 1940, Bob and Alice still lived in Penfield. Homer and his family, now consisting of five children, lived next door. At age 65 and 69 respectively, Bob and Alice were no longer able to work.

In 1941, photographer Jack Delano, working for the U.S. Farm Security Administration, took at least two photos of Bob and Alice for the book “Tenants of the Almighty” by Arthur F. Raper. The book, published by The MacMillian Company in 1943, depicted the story of Greene County, Georgia and its agriculture. Bob and Alice didn’t make the book but both pictures are in the Library of Congress today. The photo is captioned “Mr. and Mrs. Bob Callaway, couple receiving old age pension, Penfield, Greene County, Georgia.”

Bob’s wife Alice died in Union Point on December 5, 1951. She was buried at Penfield Cemetery in Penfield. Bob lived another four years without Alice. He died of pancreatic cancer at his home in Union Point on March 1, 1955. He was 79 years old at the time. Bob was buried beside Alice at Penfield Cemetery on March 3 after a service at Penfield Baptist Church. The pall bearers were Earl Butler, Marshall Turner, Howard Lankford, Vason Lankford, Julian Callaway, and Beaman Callaway. Rev. Charles H. Kopp officiated the service. Bob was survived by his son Homer; his stepson Carroll, sisters Ruth and Mrs. B. M. Jester (I can’t figure out which sister she was but she lived in Augusta, Georgia); brothers Lemuel, Samuel, and Claude; 6 grandchildren and 10 great-grandchildren.

My Daddy remembers Bob as a kind man who loved his wife Alice and liked to tease her. Bob was a member of the Penfield Baptist Church and a Mason in the past lodge in Penfield.
Posted by Denise at 9:54 PM