As I looked at the different records to write this blog post, I noticed the spelling of Vince’s last name went back and forth between Lankford and Langford. I mention this because Daddy used to say that the Langford’s thought they were better than the Lankford’s and that’s why they changed the spelling. Of course, that’s not true and he didn’t feel that way. Somebody had probably said it to him at some point and he repeated it as I'm doing here. I often see the spelling switched and find it interesting that it happens in the first place. If your name was spelled one way, why wouldn’t you correct someone if it was spelled incorrectly? Over the years, I know I’ve corrected people many times. It seems people hear the “g” more often than the “k.” Of course, Langford could have been the correct spelling and it was switched to Lankford. Who knows. Whatever the case, I’ll note the spelling in each record as I go along.

On June 1, 1900, Vince and his family lived in Woodville. The census enumerator recorded his age as 11 and birth as October 1888 which I believe it incorrect. If born in 1887, Vince would have been 13 years old, which matches the other records for him. Vince was already working as a farm laborer in June 1900, most likely helping his father who was a farmer. Vince could read and write. The census record shows that his parents had been married for 31 years and his mother had 10 children, all of which were living. Julius C. Wilson, Vince’s paternal 1st cousin (son of Emma Lankford) and his family lived next door.

When Vince was 20 years old, he married Maude Miriam Jarrell, daughter of William Jarrell and Mary Broom, in Oglethorpe County, Georgia on August 31, 1907. They were married by Marion S. Weaver, a Baptist preacher. Vince’s last name was spelled Lankford, with a “K” on their marriage license. Together Vince and Maude had five children—Agnes G. Langford, Estelle Alice Langford, Vincent Thomas Langford Jr., Roy Eugene Langford, and Mary Alma Langford. The following year started off with the death of Vince’s father James C. Lankford on January 21, 1908 in Greene County (probably in Penfield). He was 60 years old, young by today’s standards. James was buried at Penfield Cemetery in Penfield. That same year, Vince and Maude’s first child Agnes was born on December 8, 1908 (probably in Penfield as well).


Vince’s daughter Alice, born in Penfield, joined the family on January 20, 1910. Exactly three months later on April 20, 1910, the census enumerator found Vince and Maude living on Sanders Street in Penfield. They had been married for three years and had two children—Agnes (age 2) and infant daughter Alice (three months old and unnamed in the census record). Vince was a blacksmith who could read and write. The family of another paternal first cousin, Walter L. Wilson (son of Emma Lankford), lived three doors away. Two years later, Vince Jr. was born in Penfield on June 20, 1912.


Vince registered for the World War I draft in Penfield on June 5, 1917. He noted that he had a wife and two children. Vince described himself as short and slender, with blue eyes and black hair. He was still a blacksmith. His last name was spelled Langford, with a “g” on his registration card. On June 17, 1917, Vince and Maude welcomed baby Roy to the family. Vince’s mother Mary Ann Wilson Lankford died of Bright’s disease in Penfield on March 26, 1919. She was buried beside her husband James at Penfield Cemetery on March 27. Three months to the day after Mary’s death, Vince and Maude’s youngest daughter was born on June 27. They named her Mary so it’s possible that she was named for the grandmother she never knew. The family lived in Penfield when both Roy and Mary were born.

On January 30, 1920, Vince, Maude, and their five children lived in Penfield. Vince rented a farm that was four houses from his sister, Jessie Lankford Barnhart, and her family. In early October 1920, Maude came down with diphtheria and tonsillitis which proved to be fatal. After 11 years of marriage, Maude died in Penfield at 2:30 a.m. on November 30. Every record I find for Maude has a different birth year but according to the Georgia Death Index, she was 33 years old at the time of her death. The informant on her death certificate was Annie Young who I believe was her sister. Maude was buried later that same day at Penfield Cemetery beside Alice Escoe Lankford, first wife of Nathan Lawrence Lankford, Vince’s brother. James C. Lankford and Mary Wilson Lankford, her father- and mother-in-law, are buried on the other side of her grave.


Suddenly faced with raising five small children alone, Vince must have been in a panic. How was he going to work at the blacksmith shop and take care of his large family? He needed a wife. According to family members, Vince knew Thomas Terrell Burnette and his wife Elizabeth (Jones) (my great-grandparents) and arranged to marry their daughter, Eva Drucilla Burnette (my grand aunt). It’s been said that Vince and Eva’s courtship was not a storybook romance. Vince’s great-granddaughter once told me that he basically showed up at the house one day and took Eva away. Vince and Eva were married in Greene County on May 27, 1922 by John S. Callaway, the local Justice of the Peace. His last name was spelled Lankford, with a “k” on their marriage license. Vince’s sister Alice (Lankford) Callaway (my great grandmother) had a son Carroll Lankford (my grandpa) who was married to Floria Burnette, Eva’s sister. My grandparents Carroll and Floria Lankford were married on March 12, 1922 so perhaps that was how Vince knew that Eva was a single young woman of marrying age, but I don’t really know. Vince was nine years older than Eva. They had one child together, a boy they named James Hoyt Langford (Sr.), born in Greensboro, Greene County, Georgia on May 26, 1923.

By April 8, 1930, Vince and Eva had moved the family to Greensboro. Agnes and Alice were no longer living in the home with the rest of the family. Vince owned his home, valued at $1210. Vince was still a blacksmith and by now, had Vince Jr. helping him in the shop. The 1930 census record was the first time I found Vince’s last name spelled Langford with a “g” instead of Lankford with a “k.”

On April 11, 1940, Vince, Eva, and James lived on Walnut Street in Greensboro. The highest grade that Vince had completed was 4th, Eva had completed the 5th grade, and their son James had completed the 7th grade. Vince was a proprietor in a blacksmith shop. The census enumerator spelled his last name Lankford, with a “k.” 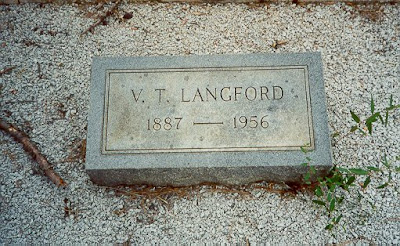 Vince was admitted to Minnie G. Boswell Hospital in Greensboro on June 10, 1956, suffering from congestive heart failure and pneumonia due to hypertensive and arteriosclerotic cardio vascular disease. He died on June 17 at the age of 69 having never left the hospital. His son Roy was the informant on his death certificate which incorrectly listed his brother James Vason Langford as his father. Vince’s obituary also listed his father as James Vason Langford. Vince’s funeral was held at Walker United Methodist Church in Veazey, Greene County, Georgia on June 19. He was buried near Thomas and Elizabeth Burnette in the church cemetery following the service. Vince was survived by his wife Eva; daughters Agnes, Alice, and Mary; sons Vince Jr., Roy, and James; sisters Mary and Dell; and brothers Nathan and Oliver. His obituary mentions a third brother named Carol Langford of Penfield who I can only assume is my grandpa, Carroll Harvey Lankford, who lived in Penfield. Carol was the son of Alice Beman Lankford, Vince’s sister, so would be his nephew, not his brother. This is just another case of my grandpa not being recognized as Alice’s son. Vince was also survived by 15 grandchildren and 3 great-grandchildren. Two of the pallbearers were Eva’s brothers, Prince and Luther Burnette. Other pallbearers were C. H. Crumbley, Ed Brown, Cola Langford, and Frank Moore. Frank Moore was the husband of Eva’s sister, Claudia Burnette. His last name was spelled Langford, with a “g” on his grave stone.

Vince was a blacksmith for many years in Greensboro as were several members of the Lankford family. One of his favorite activities was sitting on the back porch on a Sunday afternoon in a rickety old lawn chair according to his great-granddaughter.
Posted by Denise at 6:54 PM