I’m told by another researcher that Samantha had 15 children but only 12 lived. I haven’t found evidence to support that myself but am sharing that piece of information anyway. There is a stone at Old Clarkesville Cemetery where Samantha and William are buried that’s marked “Children of W. D. & S. J. Grant” so it’s certainly a possibility that there were other children.

Noel never knew his brother Starling who died in 1876 at the age of two, before Noel was born. Starling was buried in the Old Clarkesville Cemetery in Clarkesville.

On June 1, 1880, Noel and his family lived in Clarkesville. His father was a blacksmith and his mother was keeping house.

On June 14, 1900, Noel and his family lived in Clarkesville. His mother was enumerated as Jane, he as Noah, and his brother Judson as Judge. At age 22, Noel was a school teacher. Find A Grave Memorial# 57280238 for Noel’s brother Joseph notes that he “in early life taught school as a means of furthering his own education.” Perhaps Noel was doing the same thing.

Noel attended North Georgia Agricultural College in Dahlonega, Lumpkin County, Georgia. In 1902, Noel was a member of the Sigma Nu Fraternity and the Inter-Society Committee. He participated in the military organization at the school as well and was Battalion Adjutant in the 4th U.S. Infantry, Cadet Battalion, Company A that year.


The highlight of his college career was when he represented the school in an oratorical contest held in Atlanta, Fulton County, Georgia on April 25, 1902. Students came from five local colleges who were members of the Association—Mercer University, Emory College, Technological School, University of Georgia, and the North Georgia Military College. On April 23, 1902, The Constitution deemed the event “one of the biggest events of the year in Atlanta.” The next day, The Constitution reported that North Georgia Agricultural College had “great hopes” in Noel representing the college to victory:


… “The North Georgia Agricultural college has won third place for three consecutive years. The students consider that this record is becoming monotonous and they believe they have picked a leader this year, who will relieve the monotony by forging ahead of the bunch into first place. The boys from the state university are centering great hopes in their leader. They feel satisfied that the other institutions will have to score a very fine record to get ahead of the university.” …

Noel didn’t let them down and took first place in the contest that year. His victory was reported, along with his photo, on the front page of The Atlanta Constitution on April 26, 1902:


“Noel W. Grant, of Clarkesville, Wins Oratorical Prize for North Georgia. … North Georgia won the first place in the fifth annual contest of the Georgia State Oratorical Association last night. Noel W. Grant, of Clarkesville, the representative of the North Georgia Agricultural college, Dahlonega, in a forceful and well-delivered address entitled “The Righting of a Wrong,” broke Mercer’s long list of victories and wrested from the Macon university the prestige of being the leading college of the state in matters oratorical. …”

“… ‘The Righting of a Wrong,’ the winning speech delivered by Noel W. Grant, of north Georgia, is a discussion of the suffrage question in the south and is a strong plea for the disenfranchisement of the ignorant negro vote. The speech was clear and logical in every paragraph and made a great impression upon the audience. Mr. Grant’s style of delivery is original and very forceful. In contrast to the former contests there were few to question the decision of the judges.’ …”

In 1903, Noel was again a member of the Sigma Nu Fraternity, the Kappa Chapter. He was an editor of the college yearbook and Captain in the 4th U.S. Infantry, Cadet Battalion, Company A. Noel graduated that year, one of seven members of the class. The yearbook had “Legator” noted beside his name. The Free Dictionary defines legator as “a person who gives a legacy or makes a bequest.” I assume this stems from Noel’s first place in the oratorical contest, something which the college took great pride in as noted in the March 24, 1902 article published by The Constitution:


… “Every year the ‘oratorical contest’ is becoming more and more the chief event of the year with the college men of Georgia. The men of the different colleges meet each other on athletic fields, but only in this contest is it possible for the five leading institutions of the state to have representation at the same time or for their students to be present in large numbers.

While all the colleges of the state recognize the importance of athletics, the students of the different institutions also recognize the fact that the people of the state think more of one victory in this contest than they do of a thousand victories on the gridiron or the diamond. The time has passed when the students of any Georgia college can excuse failure in this contest on the ground that ‘we do not take much interest in things of that sort.’” …

Following Noel’s graduation from North Georgia Agricultural College, he was commissioned as assistant paymaster, Lieutenant in the United States Navy on October 15, 1903. Noel’s first cruise was from 1904 to 1905 aboard the U.S.S. Amphitrite, a station ship based at the Guantanamo Bay Naval Base in Cuba. He was an assistant paymaster with the rank of ensign. By 1906, Noel was promoted to Lieutenant (junior grade) and then stationed at the Navy yard in Boston, Suffolk County, Massachusetts. During 1907 and 1908, Noel was stationed at the Navy pay office in New York where he was responsible for “settling accounts.” By 1909, Noel was ordered to report to the U.S.S. Des Moines. According to Wikipedia, “Between 15 April 1910 and 23 January 1911, Des Moines cruised the coast of Africa, gathering information about commercial and political conditions, and called at the Canaries, Lisbon, Cadiz, and Gibraltar. Between March and November 1911 she returned to her Atlantic and West Indian duty, and on 6 December 1911 was placed in reserve for repairs at Boston.” Noel was enumerated onboard the Des Moines in 1910, still a Lieutenant working as an assistant paymaster. He apparently remained on the Des Moines until it was placed in reserve. In 1911, Noel was recorded on a U.S. Navy Registry as a midshipman aboard the Des Moines.


Noel spent 1912 and 1913 at the Navy yard in New York. At some point during this part of his career, he was promoted to Captain, continuing his work as paymaster.

Noel’s brother Charles died in Wheatland County, Montana on June 24, 1913. It’s believed he was buried at Langston Cemetery in Harlowtown, Montana. The Grant family suffered another loss the following year when Noel’s mother died of “an attack of acute indigestion” on October 4, 1914. She was buried at the Old Clarkesville City Cemetery. Funeral arrangements were held up until Noel, who was stationed on the U.S.S. Delaware at Vera Cruz, Mexico, could be notified. Unfortunately, he was unable to leave the ship to attend his mother’s funeral. While still on tour, Noel’s 40-year-old brother, James of Toccoa, shot himself in the chest on June 17, 1917. On June 21, 1917, the Toccoa Record reported that James had been drinking earlier and upon being brought home by friends, reportedly insisted on shooting his gun once “just to scare his wife.” He shot the gun outside, his friends left, and then he went inside the house and went into the bedroom. James returned to the living room, put the gun to his chest, and pulled the trigger. He died two hours later, leaving five children behind. As if that wasn’t enough tragedy for the family, eight days later Noel’s father William died in Clarkesville on June 25. Both James and William were buried at Old Clarkesville City Cemetery. It’s unknown whether Noel made it home for either funeral.

Noel ended the year 1919 by taking a bride when he married Rose R. Koch in Denver, Denver County, Colorado on December 8, 1919. While I don’t know who Rose’s parents were, the 1930 census record tells us that her father’s birthplace was Alsace-Lorraine (an “Imperial Territory of the German Empire” from 1871 – 1918 according to Wikipedia) and her mother’s birthplace Germany. Rose herself was born in England. A naturalized citizen, she immigrated to America in 1893. At the time of their marriage, Noel was 41 years of age and Rose was 33. They never had children. 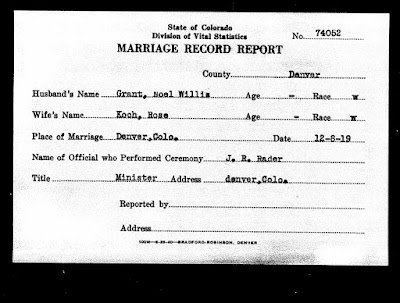 By January 24, 1920, Noel was back on board the U.S.S. Idaho which was stationed in San Pedro, Los Angeles County, California. His official residence was 1044 East 5th Street in Brooklyn, New York. He was now a cost inspector.

The next two years brought sorrow and a health issue to the Grant family. Noel’s sister Mamie died in Atlanta of a ruptured appendix on December 17, 1921. She was buried at Westview Cemetery in Atlanta. His sister Savannah died in Clarkesville on April 8, 1922 following gall stone removal and abscess of the gall bladder. She was buried in Cornelia, Georgia. At some point in 1922, Noel spent time at the Naval Hospital in New York receiving treatment of some sort. Noel’s brother Thomas, a steel worker, died in Atlanta on December 30, 1924. He was buried at Crest Lawn Cemetery in Atlanta.

On June 1, 1925, Noel and Rose lived at 10 Westminster Road in Brooklyn, Kings County, New York. Later in the year, he headed west to the Navy yard at Mare Island, California, home of the U.S.S. Langley, a Naval aircraft carrier. Noel, commander of the supply corps, spent 1925 through 1928 on the Langley. He was promoted to Captain in 1928. His home base during 1927 and 1928 was 961 East Avenue in San Diego, California according to the city directory.


Noel’s brother Judson died in Georgia on September 19, 1929. He was buried at Level Grove Baptist Church Cemetery in Cornelia, Habersham County, Georgia. Judson practiced law and was a judge in Morgan County, Georgia.

Back on the east coast, the census enumerator visited Noel and Rose on April 11, 1930. They lived in apartment E at 50 Clark Street in Brooklyn. Noel was enumerated as a Naval Officer with the U.S. Navy. A 26-year-old black woman named Maud Nisbitt lived with them, working as a maid/servant. That same year, he was on duty at the Navy purchasing and distribution office there in New York. During 1930 and 1931, Noel served as a supply officer on the aircraft carrier U.S.S. Saratoga.

Noel’s duty on the U.S.S. Saratoga ended at some point in 1931. The next stop in his military career was Washington, DC where he was an instructor at the Army Industrial College during 1931 and part of 1932. The last assignment for Noel was the Navy yard at Charleston, South Carolina during the latter part of 1932 and part of 1933. Sometime during either 1933 or 1934, Noel retired as Captain of the supply corps following a distinguished 31-year career with the U.S. Navy. He and his wife Rose returned to Rabun County, Georgia and made their home on Route 2 in Clayton.

In September 1935, Noel and Rose visited Habersham County where they rented a room at the Mountain View Hotel. While there, Noel died the morning of September 13, 1935. A simple funeral service was conducted by Rev. J. B. Smith at the Methodist church in Clarkesville the following afternoon. Following the service, his flag-draped casket was carried by life-long friends to the Grant family plot at Old Clarkesville Cemetery where he was buried beside his parents. Noel was survived by his wife, his sister Sarah, and his brother Asa. Noel was a Mason. It’s believed that Noel’s father William, a blacksmith, built the iron fence that surrounds the Grant family graves at Old Clarkesville Cemetery. 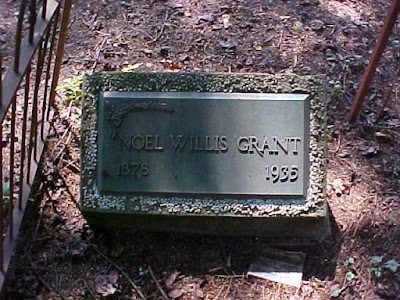