On April 7, 2017, I blogged about my father-in-law’s first wife, Vernell. At the time, we knew very little about her so I could only go so far in researching this mystery woman. We had a clue of what her maiden name was but with no way to confirm it I wasn’t ready to spend a lot of time in what could be a wasted effort. But I recently had a breakthrough when out of the blue my husband asked if I had found any more information on Vernell. I told him no, I was stuck until I could confirm her last name. He then walked into the bedroom and came back with a divorce decree he’d brought home at some point and put in a drawer instead of sharing with me. Turns out, the clue from Earl’s Navy address book was a good one—Vernell’s last name was in fact Tarkenton.

Now that I knew her last name, I searched on Alice Tarkenton hoping to find Vernell and her mother Alice together in the 1940 census. While I have yet to find a census record, I did find a 1940 Los Angeles County California voter registration record listing Alice Tarkenton as living on Clinton Street, the same street as the Alice Tarkenton in Earl’s address book. It was a different street number but good enough for me to confirm the connection.


A little more research and I found Vernell’s father and three more husbands. There’s still work to do on Vernell, but for now, this is what I know about her.

Zannia Vernell Tarkenton, daughter of Lonnie Warren Tarkenton and Alice W. Barnum, was born in Petersburg, Texas on March 25, 1929. Vernell had at least one sister, Avelyn Irene Tarkenton, born in Los Angeles, California on October 18, 1935. She went by Vernell and would have been my husband’s step-mother.

Sometime during the first year of her life, her family moved to Los Angeles, California. On April 11, 1930, the census enumerator recorded the Tarkenton family living on Rosemont Avenue in Los Angeles. Vernell was enumerated as Zinnia B. Tarkenton. Her 29-year-old father, born in Oklahoma, worked as an engineer for a construction company. Her 34-year-old mother was born in San Francisco, California. Her maternal grandfather was born in New York and her maternal grandmother in Germany.

As mentioned above, I’m still looking for the Tarkenton family in the 1940 census records.

It appears that Vernell was married four times. Her first husband was my father-in-law Earl Lloyd Murphy, son of Charles Homer Murphy and Dessie Church. Vernell and Earl were married on December 4, 1948, one day after Earl was honorably discharged from the U.S. Navy at the U.S. Naval Station in San Diego, California. Earl had served on the U.S.S. Comstock before being stationed in San Diego. The wedding took place at the Wedding Manor located at 3201 W. Pico Boulevard in Los Angeles. Glen Hampton of 2122 Clinton Street in Los Angeles was a witness. He was most likely a neighbor of Vernell’s who lived at 2126 Clinton Street. Albert S. Mason, a Presbyterian Minister performed the ceremony. Earl was recorded as being 22 years old with a birthdate of August 8, 1926. He was actually born in 1928, not 1926, so would have been 20 years old, not 22. It was the first marriage for Earl as well. Vernell was 19 years old and a secretary. The marriage certificate notes that Vernell’s father was born in Lubbock, Texas but all other records for him show he was born in Oklahoma.

We don’t know for sure where Vernell and Earl headed after they were married but a Veterans Administration Certificate of Eligibility and Entitlement form dated December 22, 1948 lists Earl’s address as Box 438 in Littleton, Wetzel County, West Virginia, which was home for him. When Earl enlisted in the U.S. Air Force Enlisted Reserve Corps on February 15, 1949, he gave an address of 3010 West Street in Weirton, Hancock County, West Virginia. And then at some point in 1949, Earl took a job as a steel inspector with the Carnegie Illinois Steel Corporation at the McDonald Plant in Warren, Trumbull County, Ohio. We also don’t know the circumstances but just over a year after they were married, Earl filed a petition for divorce on February 25, 1950 against Vernell in the Court of Common Pleas of Trumbull County on the grounds of extreme cruelty and gross neglect of duty. I found a small news clipping in my in-law’s documents documenting the filing (newspaper and date unknown):


New divorce actions were filed by Earl Murphy, 220 Belmont NW, against Vernell Murphy and by Kathleen Marx, Warren, against Fred Marx. Both charge extreme cruelty and gross neglect of duty. The Murphys were married in December, 1948, and the Marx’s in January, 1949.

A legal notice ran in the Western Reserve Democrat in Warren on March 2, 9, 16, 23, 30, and April 6, 1950. The divorce decree was signed by Judge G. H. Birrell in Warren on August 26, 1950. The decree stated that Earl “had been a resident of the State of Ohio for longer than one (1) year last past and of the County of Trumbull for at least thirty (30) days immediately preceding the filing of same.” The decree further stated that Vernell “has been guilty of gross neglect of duty as alleged in said petition and that plaintiff is entitled to a divorce as prayed for.” The Court also ordered that Vernell “be restored to her maiden name of Vernell Z. Tarkenton.” I found another news clipping that documented the divorce (newspaper and date unknown):


Gross neglect of duty served as the grounds for a decree of divorce granted to Earl Murphy, 220 Belmont NW, from Vernell Murphy. 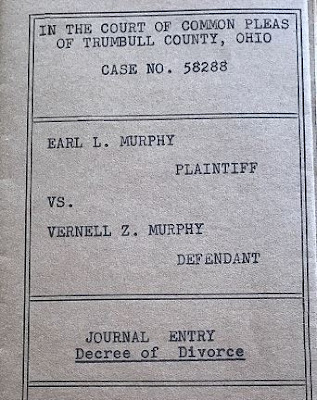 My guess is that Vernell, still a teenager when she married Earl, wasn’t happy living in Ohio and headed back home to California, thus not performing her wifely duties.

I haven’t found a record to document it yet but another researcher noted that Vernell married Floyd Charles Trosen (date unknown). Vernell and Floyd had a son they named Steven Charles Trosen on August 23, 1953 in Los Angeles. Steven passed away on July 12, 2002 and was buried at Riverside National Cemetery in Riverside, Riverside County, California.

Vernell’s father died on January 12, 1959 in Los Angeles. He was buried at Roosevelt Memorial Park in Gardena, Los Angeles.

The next marriage I find for Vernell was to Elvis Earl Bailey, a man she married in Clark, Nevada on February 10, 1962.

Vernell’s mother died on May 13, 1968. Although Alice had been married several times, she was buried with Vernell’s father Lonnie at Roosevelt Memorial Park in Gardena, Los Angeles.
Vernell died in Los Angeles on June 25, 1970. The location of her burial is unknown to me.