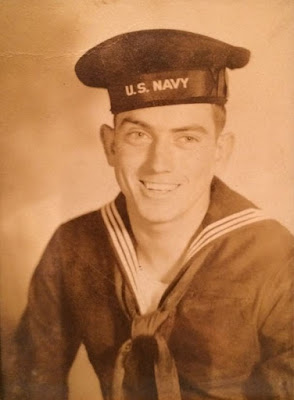 In celebration of Veterans Day, today’s post is about a veteran in the Lankford family—Samuel Terrell Lankford—my Daddy.

At age 18, Daddy registered for service in the U.S. Navy in Greene County, Georgia. At the time, he worked in the packing department for the Union Manufacturing Company, a hosiery mill in Union Point there in Greene County. He left home and headed to Atlanta, Fulton County, Georgia where he was inducted on September 19, 1944. He was sent to boot camp at Naval Station Great Lakes located near North Chicago, in Lake County, Illinois. On October 5, 1944, Daddy sent his mother a postcard from Great Lakes that reads:

I haven’t got any stationary to write you today will try and write tomorrow. I’m doing just fine. Will be home before long. We had co. pictures made today will send one home as soon as I get them. Write me often as possible. 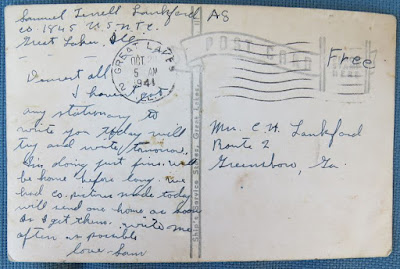 On November 19, 1944, Daddy wrote his aunt and uncle, Prince and Mary Burnette, to let them know he was coming home:

I hope this finds you all doing just fine. I’m just fine myself. I’m really tired though and I have to stand guard duty four hours from 12:00 midnight until 4:00 a.m. I know just about how I’m going to feel tomorrow. That’s one thing I don’t like about the Navy you have to stand guard about twice every week.

Well it won’t be long before I will be home. If nothing happens I probably be home about 5:00 p.m. Fri Dec. 1th. I’m not exactly sure about the time yet.

I’m going to find out and let Mama and them know though. I want everybody at home when I arrive if possible.

I have some pictures made. If you come out house while I’m there I’ll give you one.
I have to blackmail you some way to get you out home these last ones are pretty good. Well I’ll close now and sleep an hour or so. Write me before I leave. 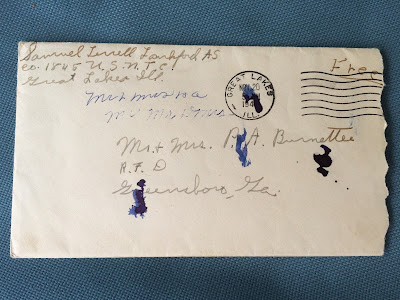 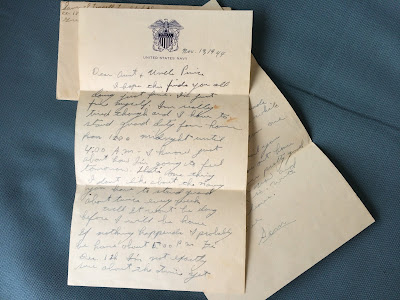 My guess is that Daddy was allowed to go home for a visit after boot camp graduation. This was his first time being away from home and family so I’m sure he was excited.


Over the years, Daddy often spoke of his time in the Navy but he only mentioned time spent in Long Island and on the Laffey. He apparently met a young woman in Long Island and has mentioned her a few times. He was a cook on the ship. Daddy was a good cook so I’m sure the sailors were happy. Now I’m wondering—did he already know how to cook before he joined the Navy, or did the Navy teach him how to cook. I’ll have to remember to ask that question next spring. Daddy never mentioned any of the training he received while in the Navy so that information was a surprise to me.

On January 17, 1946, Daddy was authorized for a change in duty by the Commander Destroyers, Pacific Fleet (ComDesPac). He appears on a muster roll for the Laffey on February 1, 1946. On March 16, 1946, he was authorized to transfer to a separation center for discharge. He again appeared on a muster roll for the Laffey on April 1, 1946. After serving the U.S. Navy for 1 year, 6 months, and 16 days, Daddy received an honorable discharge in Jacksonville, Duval County, Florida on April 4, 1946. His rank at the time of discharge was Seaman First Class, SV-6, USNR. He received an USNR Honorable Discharge Button, Honorable Service Lapel Button, and an Honorable Discharge Emblem. Single at time of discharge, Daddy returned home to Penfield, Greene County, Georgia, receiving a travel allowance of $17.75 and an initial mustering out pay of $100. He returned to work at Union Manufacturing before moving to Atlanta in 1947.

Thank you, Daddy, for your service!