Unfortunately, I have no record that tells me about John’s early years but at some point, he left St. Clairsville and moved to Apollo, Armstrong County, Pennsylvania. About 1840, he married Jane Gordon, daughter of Matthew Gordon and Elizabeth [last name unknown]. I’ve recorded the location of their marriage as St. Clairsville, which is 100 miles from Apollo, but I can’t confirm that they were married there so if you’re researching this couple, you’ll need to find proof. Jane had previously been married to John McIlwain with whom she had four children—Margaret McIlwain, James Xenophon McIlwain, John S. McIlwain, and Eva McIlwain. According to Apollo’s Quasqui Centennial souvenir program published for its 125th anniversary, John McIlwain was one of the early settlers of the town of Warren, which eventually became part of the borough of Apollo. John (McIlwain) was a tavern owner in Apollo. After his death in 1837, Jane married John Thompson Smith. The book History of Apollo, PA. 1816 – 1916: The Year of a Hundred Years written by T. J. Henry (published in 1916 by The News-Record Publishing Company in Apollo) notes on page 23 … “After the death of John McIlwain, John T. Smith married his widow and they kept tavern for many years on the corner of Warren Avenue and First Street.” Henry also makes a reference to John “keeping tavern on the corner of North and Canal Streets” in Apollo but I haven’t figured out if it’s a different or the same tavern he mentioned on page 23 of his book.

John and Jane Smith had six children together—Electra Burnette Smith, Erastus C. Smith, Eunice Alvira Smith, Martha Jane Smith, Minerva Smith, and John Milton Smith. Electra was born in Armstrong County on February 11, 1841; Erastus was born in Allegheny County (possibly Pittsburgh), Pennsylvania on October 11, 1842; Eunice was born in Armstrong County on September 19, 1844; and Martha was born in Apollo on October 3, 1846. As the family grew, John and Jane became active in the Apollo community. Page 25 of Henry’s book notes “The voters were commanded to meet in the house of John Smith and elect a burgess and five councilmen. Robert McKissen and Wm. McCullough were appointed to publish and superintend the election, to be held May 3, 1848. At this election Robert McKissen was elected burgess and Wm. Nichols, Wm. Miller, George C. Bovard, John T. Smith, John Elwood and David Risher, town councilmen.” 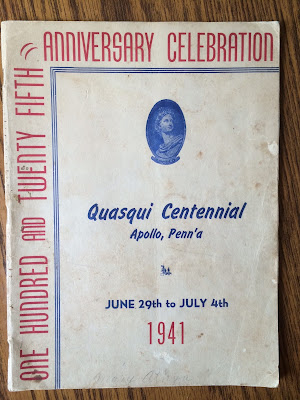 Henry’s book also states “For many years the election was regularly held at the home of J. T. Smith and Mrs. Smith always served a turkey dinner to the board.”

John’s youngest daughter Minerva was born in Apollo on May 21, 1849. Just before her first birthday, Minerva contracted cholera and died on May 17, 1850. She was buried at Riverview Cemetery in Apollo.

John was one of six men elected to the first board of school directors in 1850. Late that same year, the census enumerator found him and his family still living in Apollo on November 7, 1850. The children ranged in age from nine to four. Two of Jane’s children from her first marriage lived in the home—Margaret McIlwain, age 20, and John McIlwain, age 14. There was also a 26-year-old male with the last name Chambers living in the home. I can’t read the census enumerator’s handwriting to tell what his first name was. John was an innkeeper with real estate valued at $2,000. Jane gave birth to their sixth and last child, John Milton Smith, in Apollo on February 27, 1851.

On July 5, 1860, John and his family were still living in Apollo, running the inn. Both John and Jane were enumerated as an innkeeper. There had been no change to the value of their real estate, still recorded as $2,000. John had a personal estate valued at $500. Electra and Erastus were both enumerated as “labourer,” so perhaps they were both working at the inn as well, although Erastus was still attending school. The other three children were attending school.


John was a postmaster for Apollo at one point, running the post office from his tavern. When Apollo celebrated its Quasqui Centennial from June 29 to July 4, 1941, John was included on page 24 of the souvenir program where it noted his part in Apollo’s first election. Page 41 of the program notes him as an Apollo “First”—the first tailor. 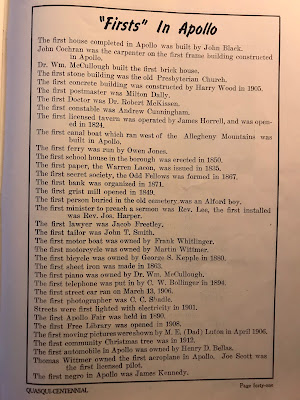 John died in Apollo on March 11, 1864. He was buried at Riverview Cemetery in Apollo. Jane outlived both of her husbands so must have buried them side by side and then she was buried with them when she died in 1877. The tombstone is a marker for all three.

John’s will was held in bond by Alexander Gordon, James Guthrie, and William Miller in the sum of $1,500 on April 5, 1864. Alexander was the administrator of John’s goods, chattels, and credits.