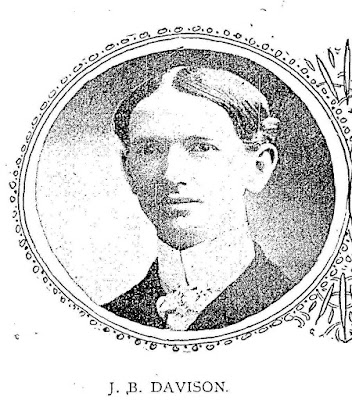 On June 14, 1880, Joseph and his family lived in the 138th District of Greene County, Georgia. His father was the postmaster; his mother was a housekeeper. There were three servants living in the home with them-Eliza Bearer (age 22, cook), Henry Towns (age 30, laborer), and Jordon Raiden (age 60, laborer).

Joseph learned about death early in life when his older sister Daisy contracted dysentery in the spring of 1887. She died at the age of 12 in Woodville, Greene County, Georgia on May 4, 1887. Just eight days after Daisy’s death, Joseph’s father, who also suffered from dysentery, died on May 12, 1887 in Woodville at the age of 45. Both Daisy and Joseph’s father were buried at Bairdstown Cemetery in Bairdstown, Oglethorpe County, Georgia.

Sometime before 1900, Joseph moved to New Orleans, Louisiana. He was listed in the 1900 New Orleans, Louisiana, City Directory—living at 1507 Prytania Street and employed as a clerk. Just before his 23rd birthday, Joseph married Julia M. Young, daughter of James L. Young and Alice J. Gorham, in Woodville, Greene County, Georgia on February 20, 1900. The Atlanta Constitution published an article on February 19, 1900 detailing the upcoming ceremony:


One of the prettiest weddings of the season will be that of Miss Julia Young, of Woodville, and Mr. Joseph B. Davison, of New Orleans, which will occur at the Baptist church in Woodville on the 20th instant at 6 o’clock in the evening. Dr. B. F. Riley, of the State university, will officiate, and Mrs. J. V. McWhorter will play the wedding march. The church will be beautifully decorated in moss, palms, ferns, smilax and lilies of the valley. The bridemaids will be: Miss Clyde Young, maid of honor, sister to the bride; Miss Bessie Davison, Miss Maggie Davison and Miss Pope Maxwell. The groom’s attendants will be Mr. Emmett Lunceford, of Monroe, best man; Mr. C. M. Young, of Athens; Mr. Will Sanford, of Crawfordville, and Mr. S. W. Durham, of Woodville. Mr. John Durham, Mr. John McWhorter and Mr. J. C. Davison will act as ushers. The flowers girls are little Miss Russell Davison, Ellener Davison, Ruby Wilson and Kathleen Armstrong. The bride’s gown will be of white satin duchess trimmed in pearls and applique. She will carry white carnations. The bridemaids will wear organdle dresses and will carry lilies and maidenhair ferns. The bride’s long vail will be confined by a diamond sunburst, gift of the groom. Miss Young is a very handsome and charming young woman and has been the recipient of many attentions since her debut. Mr. Davison is connected with the Illinois Central railroad at New Orleans. Immediately after the marriage the bride and groom will leave for New Orleans, their future home. 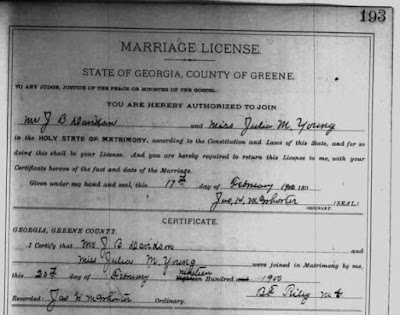 On June 13, 1900, Joseph and Julia were in fact living on Duffosat Street in the Orleans Parish of New Orleans. Joseph was a clerk for the railroad. The year 1900 was huge for Joseph and Julia with three major events taking place in their lives. They got married, Julia moved to New Orleans, and then she must have gotten pregnant within a month of their wedding as she gave birth to their first child, Joseph Jr., in Louisiana on December 16, 1900.

On May 16, 1901, 14 years after the death of his father, Joseph’s mother married Dr. Peyton Wade Douglas in Greene County, Georgia.

Joseph and Julia’s stay in New Orleans was short-lived. By 1905, they moved to Atlanta where they lived at 298 Central Avenue. Joseph was a clerk for Bell Telephone Company. By 1907, they moved to 30 Augusta Avenue in Atlanta and were still living there in 1908 when Roy was born on May 15. Joseph was now working as a traveling salesman.

On April 22, 1910, Joseph, Julia, and Joseph Jr. still lived in the Augusta Avenue house. The census enumerator spelled their last name “Davidson.” Joseph and Julia had been married for 10 years. Julia was enumerated as the mother of two children, both of which were living. Joseph was a traveling salesman for wholesale grocers. He was paying a mortgage on the house they lived in.

Tragedy struck the Davison family in the fall of 1913 with the premature death of Joseph on October 15, 1913, most likely in Atlanta. Unfortunately, I don’t know the circumstances of his death but I imagine it must have been unexpected as he was only 36 years old at the time. Joseph was buried in the family plot at Bairdstown Cemetery. The Atlanta Constitution published an “In Memoriam” for Joe on October 19, 1913:


In the death of Joe Davidson, [sic] the ranks of the salesmen who work out of Atlanta have suffered a loss which can never be fully filled. Mr. Davidson was one of the best representatives of that splendid class of men who today form the backbone of business, the salesmen. He represented the Frank E. Block company of this city for many years and his territory comprised the Southern road to Macon and the Georgia road from Crawfordsville south.

He was a member of U.C.T. Atlanta Council 18, and is sincerely mourned by his fellow members. While not a strictly religious man in the narrow sense of the term, Mr. Davidson was one of the best men it has ever been the writer’s pleasure to meet, and if all those who came in daily contact with him, will take his life as an example of how to live and keep it ever before them, he will have left a mark on his community which will work for good as long as mankind retains a memory.

Mr. Davidson is survived by his wife and two young children. 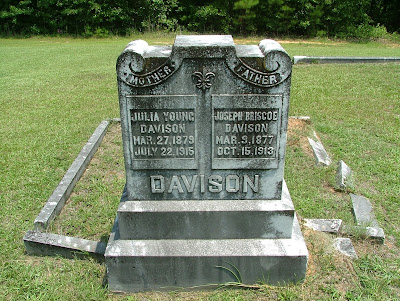 According to Wikipedia, U.C.T. was a society of traveling salesmen. “The Order of United Commercial Travelers was formed on January 16, 1888 by six men in a meeting at the Neil House in Columbus, Ohio to provide a society for traveling salesmen, or commercial travelers.”