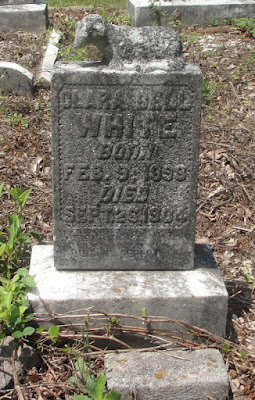 The 52 Ancestors theme this week is “misfortune.”

Clara Bell White, the daughter of Candler Milton White and Lenora Dean Lankford, was born on February 9, 1898 in Georgia, most likely Clarkston, DeKalb County. She was the oldest child of three—Clara Bell White, Charles Candler White, and Russell L. White. Clara would be my 3rd cousin 3x removed with our nearest common relatives being Nathan Lankford and Marion Caldwell who were married in Rutherford County, North Carolina about 1790.

In September 1899, baby Charles was born in Clarkston making Clara a big sister. The family still lived in Clarkston when the census enumerator visited on June 5, 1900. On that day, Clara’s parents had been married for three years. Her father made a living as a carpenter. Clara’s youngest brother Russell was welcomed into the family about 1902.

Sadly, Clara’s young life came to a tragic end on September 26, 1904 when she died after contracting tonsillitis in Clarkston at the age of six. Clara must have died early on the 26th as her death was reported in The Atlanta Constitution that same day. The news article noted that Clara was buried at Indian Creek Cemetery in Clarkston, however, Find-A-Grave has Clara’s burial location as Clarkston Cemetery and includes the photo used here. An Indian Creek Cemetery transcription found on the Georgia USGenWeb Archives Project website lists Clara’s parents but not her so perhaps there was a last minute change in cemeteries at the time of burial.

Had Clara been born today, the doctor would have prescribed antibiotics once she was diagnosed with tonsillitis and she probably would have recovered within days. Unfortunately, she had the misfortune of being born in 1898, long before penicillin was discovered in London in 1928 and first used on humans in March 1942.