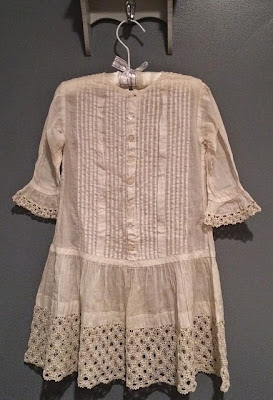 The 52 Ancestors theme this week is “lucky.”

This beautiful baby dress once belonged to Benjamin Gordon Smith, my husband’s grand uncle. Ben was born in Apollo, Armstrong County, Pennsylvania on November 18, 1882 and was the first born child of John Milton Smith and Amanda Larimer Horne. He was an only child until his brother George was born on October 22, 1885.

In 2008, my father-in-law (Earl Murphy) was in declining health so he moved to an apartment near us. At the time, he still owned a house about 25 miles away. He and my mother-in-law (Mary Athya Murphy) purchased the house in 1981, planning to move there when he retired. Earl spent several years remodeling the house while still living in the family house. Once he was ready to retire, they sold the family house and moved to the retirement house. We helped them clean out the family house attic, which contained many boxes that hadn’t been opened in years. Those boxes were moved to the retirement house and placed in a cement block shed that stood beside the driveway where they would remain unopened for many more years.

Before her death, Mary told me several times that there was a program in the shed from Apollo’s 125th anniversary celebration in 1941. Because of this, and assuming there would be other documents, I knew it was important to go through every box when we  cleaned out the shed in the late 2000s. Having done a lot of research on the Smith family, I was on the lookout for the celebration program, which we found, along with many other documents that are gold to a genealogist. It turns out, the boxes contained items that had once belonged to my husband’s maternal grandmother, Bertha Edna Smith Athya and his maternal great-grandmother, Amanda Smith. I remember opening one cardboard box in particular. Inside the box were odds and ends as well as a dirty plastic bag. I could tell there was a piece of cloth wadded up in the bag but had no idea of what I was about to discover. When I opened the bag, I found this baby dress. My mother-in-law was the only person who would have known anything about the gown, but she had passed away in 2006. Lucky for us, Mary’s mother, Bertha, had written a note and placed it inside the bag with the dress. The note reads:

Ben never married and lived with his mother Amanda for many years. It’s assumed that once the dress had met it’s needs, Amanda packed it away for safekeeping. I have no way of knowing if Ben ever took possession of the dress as an adult but I doubt it. My guess is it stayed packed away with his mother’s possessions until she passed away in 1943. Amanda was living with Bertha at that time so being the only girl in the family that survived, she took possession of the dress and it moved with her to Ohio after Amanda’s death. In 1949, Ben moved to the Elks Home in Bedford, Bedford County, Virginia where he died in 1957. Bertha was living with Mary when she passed away in 1979. Mary kept many of her mother’s belongings, the dress being one of them.

The 1880 census record shows that Amanda was employed as a dressmaker so it’s no surprise that she made this dress for her first-born child. She would have been 24 years old at the time.


After finding the dress, I brought it home and gently cleaned it with baby laundry detergent, then laid it flat to dry. I spent a Sunday afternoon looking for a baby hanger in the local shopping center and no one had anything appropriate for sale. I finally found one in a baby clothes display at Macy’s. I asked if they were for sale, which they weren’t. They had several laying around the cash registers though and one of the cashiers gave one to me.

The dress is 19 ½ inches in length and 10 inches wide at the waist. The material, which is very thin, is the color ecru. The dress has some damage—four small holes on the front skirt, two round holes on the back, and a long-frayed tear on the back. I see the beginnings of a small hole on one sleeve. Otherwise, it’s in fair condition.

The dress is about 134 years old and now hangs in my bedroom. Thank God Bertha left a note in the bag with the dress or we would have never known the history behind the dress.


In 2014, I set a genealogy goal to document our family treasures. Although I’ve included this item in previous posts, I recently realized it needs to be added in the family treasures series so this post takes care of that.
Posted by Denise at 9:01 PM