The 52 Ancestors theme this week is “Where There’s a Will” so I thought I would write about a female member of the family that fits the bill—Willie Mae Shields.

Willie Mae Shields, daughter of James Stewart Shields and Hattie Jane Rhinehart, was born on July 3, 1914 in Varnell, Whitfield County, Georgia. She was the 2nd child of 11—Daisy Lee Shields, Willie Mae Shields, James B. Shields, Betty Ann Shields, Paul Sam Shields, Bessie Lucille Shields, Mary Nell Shields, Dorothy Joline Shields, Bobbie Jean Shields, Charles Dewayne Shields, and Loyal Mack Shields. It’s believed that Hattie had a 12th child, possibly stillborn, but I’ve not found any proof of that. Her older sister Daisy was my granny so she was my grand aunt. I know we visited her a couple of times when I was very young but I don’t remember her at all. What I share here comes from my research and memories of a few family members. Her life timeline follows.

What goes into selecting your baby’s name? I know for my children, we simply created a list of names and crossed them off the list until we came up with a combined name we both liked. I probably shouldn’t admit it, but it never entered my mind to name my children after anyone. I wonder how my Pappy (James Stewart Shields) and Grandma Shields (Hattie Jane Rhinehart) came up with the name Willie Mae. Did they just pick the name out of the blue? The name wasn’t that popular at the time. There were 23 girls given the name Willie Mae in 1914 according to Names.org, although WeddingVendors.com includes the names “Willie” and “Mae” on the list of “100 Most Popular Baby Names of 1914.” According to the Social Security Administration, the name Willie was number 66 and Mae was number 88 in the “Top names of the 1910s” for women. With “Willie” being a shortened form of William, perhaps Willie was given this name to honor family members. Her grandfather was William Dearnald Rhinehart; her great-grandfather William Robert Sneed. Another great-grandfather is said to be William Cleason Ogle although I still need to prove this one. Her uncle was William Elmer Shields. Her middle name “Mae” could have been to honor two of Willie’s great-grandmothers who were named Mary. According to Babynamewizard.com, “Mae” is a “pet form” of Mary. I guess I’ll never know but I do like that it’s a very Southern name which was appropriate given that Willie and her family lived in north Georgia.

A month before Willie’s second birthday in 1916, her brother James, the first boy in the family, was born at home. Her sister Betty was welcomed into the family in 1919.

On January 6, 1920, Willie and her family lived in the Lower Tenth District of Whitfield County, Georgia. She and Daisy were both attending school. Willie’s father was a farmer on a general farm. Her 54-year-old widowed maternal grandmother, Betty (Sneed) Rhinehart, lived in the home with the family. Three more siblings were added to the family during this decade—Paul Sam in 1922, Bessie in 1924, and Mary in 1927.

On April 19, 1930, Willie and her family lived at Prater Mill and Deep Springs Roads, still in the Lower Tenth District of Whitfield County. At age 15, Willie did not attend school, however, she was able to read and write. Farming was still the occupation of choice for her father. Willie’s paternal grandparents, Cas and Martha (Ogle) Shields, lived next door, along with her uncle Blaine Shields. Willie’s parents now had a full house (with more to come) of eight children with the girls outnumbering the boys six to two. Joline, Bobbie, Charles, and Mack were all born during this decade.

At age 24, Willie was practically a spinster when she married Loyal Cecil Smith, son of William David Smith and Annie Mae Reed, on March 18, 1939, location unknown. No children were born to this union. Willie did become pregnant once but lost the baby and was never able to have others. I feel sad for Willie that she was unable to have children, but being the second oldest of such a large family, I’m sure she had her hand in raising many children.


At the time of their marriage, Cecil had been living in Chatsworth, Murray County, Georgia and Willie in Dalton. By the time the census enumerator made his rounds on April 26, 1940, they had made their home in Dalton, Whitfield County, Georgia. Willie stayed at home keeping the house while Cecil worked as a clerk in a retail grocery store. It appears they spent a short time living in Chattanooga, Hamilton County, Tennessee as I found them listed in the 1942 city directory. Cecil worked as a truck driver for the Malone Freight Line at the time.

By 1951, they had moved back to Dalton. At the time, Willie worked as a machine operator for Dixie Chenilles which is not surprising since Dalton is known for its textile/chenille industry. Willie and Cecil still lived in Dalton in 1958 according to the city directory. 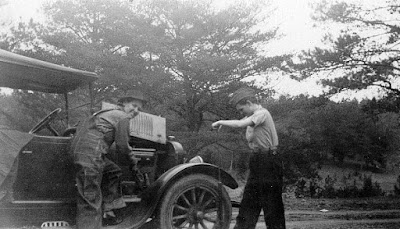 On September 7, 1962, Willie’s father (my Pappy) suffered a blood clot of the heart and was found dead in the field by his house in Tunnel Hill, Catoosa County, Georgia. Her brother James lived in Alabama when he passed away in 1972. Her sister Betty also lived in Alabama when she passed away in 1975. Pappy and James were both buried at Nellie Head Cemetery in Tunnel Hill. Betty was buried at West Hill Cemetery in Dalton. Willie’s mother Hattie (her children called her “Mommie,” we called her Grandma Shields) passed away in Chattanooga in 1982. Grandma Shields was buried with Pappy at Nellie Head Cemetery. Daisy (my granny) passed away in Riverdale, Clayton County, Georgia in 1987. Granny was buried at Anderson Cemetery in Ringgold.

There was most likely always music in the Shields home. Willie’s father played the fiddle and her mother the banjo. I don’t know about the girls in the family but have seen photos of Paul Sam and Mack playing as well.

Willie and Cecil had Frizzle chickens, which according to Wikipedia, “is a breed of chicken with characteristic curled or frizzled plumage.” Mama described them as chickens with the feathers turned backwards. She also remembers them having stuffed rabbits and snakes sitting on the mantel.

After Willie was diagnosed with cancer, the Reed family and her brother Charles’ daughter took care of her. Willie died on January 13, 1994 at the age of 79 in a Dalton hospital. She was buried on January 15 at the Reed Family Cemetery, a private cemetery in Chatsworth on top of a hill overlooking the mountains. They had to dig through solid rock to make the grave.