My Mama, the strongest woman I know 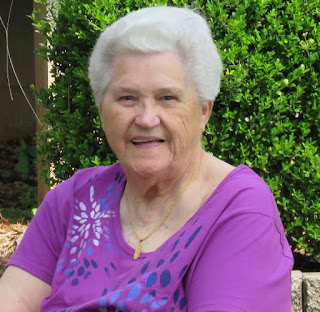 The 52 Ancestors theme this week is “strong woman.” I didn’t have to think too long to determine the subject of my blog post this week.

What makes her a strong woman? Well, let me tell you …

… Mama was just a young girl when her mother left home, leaving her only child behind. Granny would come and go in Mama’s life for the rest of her childhood, including having little contact with her from 1941 to 1948. Granddaddy was a truck driver so had to depend on help from family, neighbors, and hired help to take care of Mama. She had a lonely childhood.


… At age 15, Mama met and married Daddy. My sister was born the following year. Later that same year, Daddy came home and told Mama he was selling the house to a couple that lived with them and she could do whatever she wanted. Mama’s uncle helped move her and my sister to Tunnel Hill in north Georgia. The two of them moved between houses, staying with Granny and my Grandma Shields (Granny’s mother). At one point, Mama and my sister were separated for several months when Granny moved to Tennessee and took my sister with her. Mama divorced Daddy that year.


… While living in Tunnel Hill, Mama got a job in Chattanooga, Tennessee. With no car, she left home three and a half hours before her shift at the textile mill began and walked three miles to the bus station, then rode the bus 20 miles to Chattanooga, and finally caught a city bus to the mill. Her shift ran from 3 to 11 PM and then she made the same trip home. After several weeks of this routine, she was able to get a room in Chattanooga and found someone to help take care of my sister while she worked. They lived there a year before Mama got an apartment of her own.


… Four more children were born but by all accounts, it was a lonely, loveless marriage. Daddy worked and provided for the family but mostly kept to himself. Mama took care of everything else. She was involved in school, took us to church, and made sure we were always doing something fun. When I look back at family pictures, we spent a lot of time around water—going to Lake Spivey and Joy Lake. She saved her money and took us for a beach vacation in Florida every year. At least seven or eight houses in our neighborhood belonged to one family. They welcomed our family into theirs and invited us to join them at their property on Lake Jackson, their vacations in Daytona Beach, and even their family Christmas parties. They would often take us kids to the lake during the week and Mama would join us on the weekends. Mama and the five of us kids spent many, many fun times with them.


… Mama eventually divorced Daddy again but she waited for all five of her kids to reach adulthood before taking that step.

… Mama worked a full-time retail job all those years, managing a shoe store. She was robbed multiple times during her many years of employment—five times with a gun and twice with a knife. I would have quit after the first time but she didn’t.

… Mama was scheduled to go on a trip to Italy the fall of 2001. Then 9/11 happened. Many people felt she shouldn’t go but she said “if the State Department doesn’t feel it’s safe for us to go, they won’t let us go.” I would have cancelled but she went and had a ball. 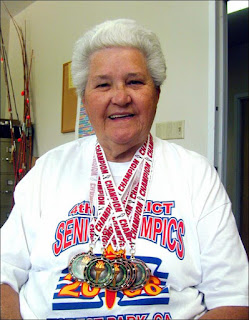 … Volunteering has always been important to Mama. When we were young, she volunteered with the March of Dimes. In 1996, Mama was a volunteer during the Atlanta Olympics, working security. She served on the Clayton County Senior Advisory Council for the Parks and Recreation’s Senior Adult Division where she helped develop programs for the seniors. She worked with the Red Cross, supporting blood drives and disaster relief. Mama was named Clayton County’s (Georgia) Red Cross Volunteer of the Year in May 2002. The Red Cross Disaster Relief sent Mama to North Carolina in 1999 after Hurricane Floyd and to Oregon in the summer of 2002 to help with the fires. As part of the Clayton County Golden Kiwanis Club, she supported schools, battered women’s shelters, the March of Dimes, and helped prepare food baskets to pass out at Thanksgiving and Christmas. She has been active in senior centers for years. She was there at tax time to help organize the seniors coming to get their taxes done. For several years, she cooked treats to sell at the senior center to raise money for birthday parties. She organized a group of women (and one man who drives his wife so he joins in) that meet monthly for lunch. They call themselves the Gruntin’ Grannies because she said they all grunt when they get out of their chairs or cars. Now I giggle every time I hear myself grunt when getting out of my car! She’s always thinking of something she can do to help someone.

… Mama has had several health setbacks in the last 25 to 30 years. She was near death a time or two but thankfully pulled through. On one occasion, I spent three weeks at my youngest sister’s house helping her take care of Mama. I gained a new respect for healthcare givers during that time. It was the hardest thing I’d ever done and I wasn’t the one in recovery. During her recovery, Mama did everything the doctor told her to do because she wanted to get back to her normal life. My sister, who has health issues of her own, has been a rock in watching over Mama for many years and I appreciate everything she does. They take good care of each other.

Mama last came to Virginia in May 2017 and while she was here, it struck me that she is a very independent woman. I hadn’t thought about her that way before. While clearly handicapped, she didn’t want to be waited on. She was perfectly capable of getting herself out of the chair or the car. Mama didn’t let the setbacks in her life hold her back. She likes to say she’s making rocking chair memories. Well, I think she’s made enough to last many lifetimes! Mama is the strongest woman I know. She raised five productive children. She persevered. I hope I can be half the person she is. She’s my hero.
Posted by Denise at 7:32 PM