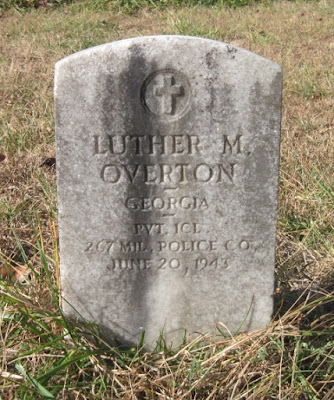 The 52 Ancestors theme this week is “so far away.”

Luther Mercer Overton, son of Fletcher L. Overton and Martha Cornella Lester, was born in Atlanta, Fulton County, Georgia on June 27, 1899. His mother had at least 10 children, 8 of which lived according to the 1910 Stansells District, Newton County, Georgia census record. I can track 8 children—Minnie L. Overton, George Robert Overton, Leonard Lorenza Overton, Carrie Winnie Overton, Luther Mercer Overton, Clodie Overton, Parie Mae Overton, and Sadie Lee Overton. There was a girl named Clara Overton listed in the 1910 census record, born the same year as Parie Mae but I haven’t been able to track her elsewhere. That particular census record doesn’t have a child named Parie Mae so she might have actually been Parie Mae listed incorrectly as Clara in the census. I’ll keep looking. I haven’t identified the 10th child yet. Luther’s grandmother was Louisa E. Overton, daughter of Abijah Overton and Elizabeth Ann Rhodes, my 3rd great-grandparents. I’ve been told Louisa only had one child (Fletcher) which she gave the Overton name, but I haven’t proven this yet. Luther would have been my 2nd cousin 2x removed.

On July 10, 1900, 1-year old Luther and his family lived in District 0094 of Rockdale County, Georgia. His parents had been married for 13 years. His mother was enumerated as having had six children, five of which were living. His father Fletcher was a farmer, being helped by 11-year-old Minnie and 10-year-old George.

By May 11, 1910, the family had moved to the Stansells District of Newton County, Georgia. The enumerator noted the location as “Rockdale County Line to Yellow River” so they must have moved just over the Rockdale County line. Luther’s mother was enumerated as Dollie and as mentioned above, was noted that she’d had 10 children, 8 of which were living. His father was still farming, now with the help of Leonard, Carrie, and Luther. The William Presley family lived next door which would be a significant factor to Luther’s future.

On April 6, 1917, the U.S. joined Britain, France, and Russia and entered World War I. On June 26, 1917, rather than waiting for the draft that would take place in July, 18-year-old Luther left his home in Conyers, Rockdale County, Georgia, headed to Atlanta, and enlisted in the 5th Regiment. I’m sure he knew that it would mean he would be sent far away from home to fight in the war but he didn’t let that stop him. According the a June 27, 1917 article titled “Men Enlisting Now Before Draft Comes” published in The Atlanta Constitution, “… it is advantageous to join now, with a good chance at promotion, rather than waiting to be a private in one of the regiments of the drafted army … .” Luther served in Company B of the 5th Georgia Infantry NG until June 3, 1918. His overseas service began on June 20, 1918. At some point, he began serving in the 267th Company of the Military Police Corps, and then the 1st Replacement Depot until his discharge. He received the grade of Private First Class on November 2, 1918. Nine days later on November 11, World War I ended. It appears that Luther stayed in France for several more months though. On December 12, 1918, The Atlanta Constitution published an article that included a poem written by Luther and another soldier:


Two Atlanta Boys Send Poems Fresh From Trenches—In addition to playing at the war game with all the enthusiasm that has marked the fighting of Georgians during the present war, Privates Luther Overton and H. E. Russell, the former of Company C of the 164th infantry, and the latter of 217th Military Police company, have found time to combine efforts and produce some war poetry that reflects real credit on the writers. Here is a short selected poem from several received by a friend in Atlanta sent him by Privates Overton and Russell from the trenches in France:

The Sammies.
We were with General Funston on the border.
And we were with General Pershing on the Marne;
Under General Lyons at Camp Wheeler.
And under General Scott in St. Aignon.
We helped the Sammies pacify the Mexes.
And we also did our bit to whip the Huns;
But the hardest times we ever spent was when
We were privates shouldering Enfield guns.

I’m not sure why Luther would have still been in France, but he had apparently suffered a broken leg at some point. Injured, he departed St. Nazaire, France on April 18, 1919 onboard the SS Kroonland, heading home to Conyers. He arrived in Hoboken, New Jersey on April 29 and I believe was taken to Camp Mills in Long Island, New York. Unless he spent time in medical facility there, he was most likely put on a train and sent home to Georgia. Luther received an honorable discharge on May 15, 1919.

Wikipedia provides an interesting piece of information about the April 1919 voyage, “… On 18 April, Kroonland began her next homeward journey, embarking several companies of the 111th Infantry Regiment of the U.S. 28th Infantry Division among the 3,100 troops carried. Though the fighting was over, the men still wore life jackets for the first three days at sea amidst fears of striking floating mines. George W. Cooper, historian of the 2nd Battalion of the 111th Infantry, reported that some of the men had to serve as stokers during the trip because of a “shortage of help.” In the middle of the crossing, the ship “sprung a leak” and took on 10 feet (3.0 m) of water; she had a list for a day or so, until repairs were made. The troops later disembarked at New York on 29 April.


Luther married Ruby L. Presley, daughter of William Thomas Presley and Dovie Estelle Townsend, most likely in 1919. I haven’t found a marriage license yet, but found the married couple living with her parents in the January 12, 1920 Almon, Newton County, Georgia census record. Neither Luther or Ruby were working at the time. Later that year, Ruby gave birth to their first child, a daughter they named Clara “Agnes” Overton in Atlanta on August 30, 1920. By 1923, the couple had moved to Atlanta, living at 163 E. Ormond. Luther worked as a clerk at the time. They didn’t stay there long though. In 1924, still in Atlanta, they lived at 127B Garden. Luther was now earning a living as a driver. Luther’s mother, Martha, died in 1925. She was buried at East View Cemetery in Conyers. In 1928, the couple had once again moved, now living at 240 Milton Avenue SE in Atlanta. Luther was a manager. In 1929, they were still living on Milton Avenue but now at 230 rather than 240.

On April 11, 1930, I found Ruby and Agnes living with her parents at 251 Milton Avenue in Atlanta. Ruby was enumerated as married, but Luther wasn’t living in the home and I haven’t been able to find him in any other census record. He was living there in November however. On November 13, 1930, Luther was “driving toward Atlanta in his car,” when he came upon an accident “two miles south of Jonesboro” in which Colonel Robert Vans Agnew, U.S.A., retired, was seriously injured. Colonel Vans Agnew was a popular officer formerly stationed at Fort McPherson. Luther rushed Colonel Vans Agnew to Grady Hospital in Atlanta, but he died at the hospital from his injuries. A former soldier himself, this must have been traumatic for Luther.

The following year brought happier times to the family when a bouncing baby boy they named Luther Mercer Overton Jr. joined the family. They still lived in Atlanta in 1932. At the time, Luther was the manager of Overton Service Station. Luther’s father Fletcher died in Atlanta on July 10, 1933. Luther was the informant on his death certificate. They buried Fletcher beside Martha at East View Cemetery in Conyers. In 1934, Luther and Ruby lived at 1040 Ridge Avenue SW in Atlanta. Luther worked at a restaurant. By early 1935, Luther and Ruby had moved to Miami, Dade County, Florida, renting a home at 3064 SW 17th Street. Luther was a waiter. On March 4, 1935, Ruby gave birth in Miami to their third child, a daughter they named Barbara Jean Overton.

On April 10, 1940, Luther and his family were still living in Miami. Luther was working as a painter in the building construction industry. Agnes was no longer living at home. In 1942, 42-year-old Luther registered for the World War II draft. He and Ruby lived at 796 Ashland Avenue NE in what is now the Inman Park neighborhood of Atlanta. Luther was apparently self-employed, working out of his home, however, the registration card doesn’t record what his occupation was at the time. Sadly, while still a young man at the age of 43, Luther died on June 20, 1943 in an Atlanta hospital. He was survived by his wife, two daughters, a son, three sisters, and three brothers. Ruby applied for a military headstone for his grave at Roseland Cemetery in Atlanta.