The 52 Ancestors theme this week is “on the farm.”

Many of my ancestors were farmers. I used to say “my ancestors are boring, they’re just farmers” but now I realize that farmers are just as important as lawyers and doctors. If someone doesn’t grow the food, what does everyone eat? Farmers work hard, 365 days a year. This blog post is about one of the farmers in my Shields family line.

In 2001, my sister Jennifer and I worked with family members to create a Shields family tree. We asked family members to share their memories and one cousin in particular was a huge help—Tommy Denzil Shields—our first cousin, 2x removed. Tommy lived in California and didn’t have email so since Jennifer lived in Georgia and I lived in Virginia, we corresponded with him via telephone and letter writing. Tommy felt it was important to tell the stories so put his pen to paper and started writing. Some of his memories are included in this blog post.

On June 8, 1900, Milas and his family lived in the 13th Civil District of Sevier County. He was enumerated as Milous in the 1900 census record. Milas’ parents had been married for eight years and had four children. His father was a farmer, so he was born into farming.


On May 3, 1910, Milas and his family still lived in the 13th Civil District of Sevier County. At age 16, Milas was a farm laborer, apparently working on other farms as he was enumerated as “working out.” Although attending school, Milas could read but not write.

Sometime between 1910 and 1913, the Shields family moved to Georgia. His father Cas took a train from Knoxville, Knox County, Tennessee to Dalton, Whitfield County, Georgia in search of a place to move his family and farm. It was felt that farm land in north Georgia was better and cheaper than the mountain land around Sevierville. There was also an Ogle family member (Cam Ogle) living in Dalton so it made sense to go there. Cas bought land between Prater’s Mill and Deep Springs and then went back to Sevierville to get his family. They made their way to Dalton using two two-horse wagons, each pulled by two mules with two cows, four dogs, two coops of chickens, and all of their furniture which consisted of a kitchen stove, a table and 10 chairs, and four bed steads. The children walked and rode in the wagons. It took them 8 to 10 days to make the trip, traveling approximately 120 miles. Cas later referred to the trip as being fun—they camped by creeks and in farmer’s fields. It was more like a picnic to everyone. Cas picked a farm on top of a hill with a long drive, settled in, and started farming his land. About 1916, Milas married Effie Cross, daughter of William E. Cross and Sarah Hayes. I assume the wedding took place in Whitfield County but haven’t found proof of that yet. Milas registered for the World War I draft in Whitfield County on June 5, 1917. The registrar, Eligia F. Jarrett, noted that Milas was short and stout and had black hair and eyes. Tommy remembered Milas as being a big man.

On January 12, 1920, Milas and Effie lived at Varnell and Beaverdale Roads in the Lower Tenth District of Whitfield County, Georgia. He was a farmer on a general farm. The 1920 census record notes that Milas was unable to read or write.


The tragic death of Milas’ 16-year-old sister Maude occurred on February 10, 1930. I have yet to find a death certificate, but it’s believed she died in childbirth. Maude was buried at Grove Level Community Cemetery in Dalton. On April 23, 1930, Milas and Effie lived off Cedar Valley Road in Militia District 631 of Whitfield County. His home was classified as a farm and Milas was enumerated as a farmer on a general farm. The census enumerator noted that Milas was 21 and Effie 23 when they married and that he was not a veteran. Milas and Effie’s next-door neighbor was my Granddaddy, Sam Holland, his first wife Opal, son W. L., and mother Janie. Milas’ niece was Daisy Shields, the daughter of his older brother Stewart and my Granny. Sam’s wife Opal died at the age of 26 on April 26, 1931 in Whitfield County. Two months after Opal’s death, Sam married Daisy. It’s possible that my Granddaddy met my Granny through Milas.


On April 3, 1940, Milas and Effie lived at Prater’s Mill and Grove Level Road in the Lower Tenth District of Whitfield County, Georgia. Milas was farming his land. The 1910 census record noted that Milas was attending school but in this record when asked the question about the highest grade completed, he stated “none.” His parents lived five houses away. Effie’s widowed sister Josie Blackwell and niece Gussie Blackwell lived in the home with Milas and Effie. The census enumerator was noted that Milas worked a 60-hour week prior to the census being taken. The following year, Milas’ sister, Pearl Shields Hester, moved into their parents’ home near Deep Springs in Whitfield County with her five small children. Pearl was sick with tuberculosis and no longer able to work. Her husband Oscar Hester “drank up her paycheck” and was not supporting his family. Cas and Martha Shields did what they could but couldn’t afford to feed their daughter and her family so brother Elmer brought food daily to help out. At the age of 32, Pearl died at her parents’ home on July 26, 1941. After her death, “Oscar abandoned the children.” There was no money to pay for Pearl’s funeral. Her brothers Elmer, Milas, Stewart, sister Addice, and husband Oscar pledged to pay the $500 expenses to Kenemer Brothers Funeral Home although “Elmer ended up paying most of it, as the others never had the money.” Pearl was buried at Grove Level Community Cemetery in Dalton with her sister Maude. Four of Pearl’s children ended up being sent to Georgia Baptist Orphans Home in Hapeville, Fulton County, Georgia. The oldest was deemed too old to go and moved around with other family members.


The 1950s was a sad decade for Milas. He lost his brother Walter and father Cas in 1955. Walter died in Varnell, Whitfield County on April 6, 1955. He was buried at Red Hill Cemetery in Cleveland, Bradley County, Tennessee. His father Cas died at home on Route 4 in Dalton on September 26, 1955. At the time of his death, Cas lived on 17 acres next door to Milas. Cas was buried at Grove Level Community Cemetery in Dalton. Milas’ wife Effie died in Dalton of pulmonary edema due to a viral infection and malnutrition on July 29, 1958. She was buried at Good Hope Baptist Church Cemetery in Dalton.

Milas’ mother Martha died in Dalton at the age of 91 on July 10, 1961. She was buried beside Cas at Grove Level Community Cemetery in Dalton. His brother Stewart died in Tunnel Hill, Catoosa County, Georgia on September 7, 1962. Stewart, also a farmer, was found dead in the field by his house. He was buried at Nellie Head Baptist Church Cemetery in Tunnel Hill.

Tommy Shields wrote that Milas was a big man and a hard worker who farmed most of his life. Tommy believed Milas’ farm was approximately 100 acres that once belonged to his brother Elmer. When Elmer moved back to Tennessee, Milas took over the payments. This farm had two houses and a big barn. Milas took odd jobs to get through the bad seasons, mostly in carpentry but sometimes helping other farmers. Milas always plowed his farm by mules—he always kept beautiful mules and one or two cattle. There were two wells on the farm—one was outside the kitchen and was where they drew water for the house. The other was a cattle well down in the pasture. Effie could draw water faster than any of them on the farm. 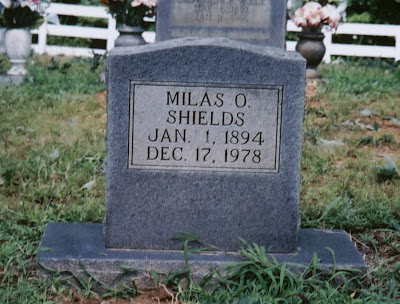 Effie’s sight was bad, and she eventually went totally blind. Tommy said Effie could go anywhere she wanted around the farm, but didn’t venture off the farm, except to go to the doctor, etc. He remembered going with Effie to gather eggs and do chores around the farm and she went at a fast pace. Effie’s sister Josie Cross Blackwell and her daughter Gussie lived in the second house on the farm. When Effie died, Josie and Gussie moved in with Milas and rented out their house for added income. Tommy said when Josie died, Milas and Gussie married, although I don’t find a record of a marriage. There is a U.S. Social Security Applications and Claims Index, 1936–2007 that lists Gussie Mae Blackwell who’s mother was Josie Cross. It doesn’t show that her last name was ever Shields. Perhaps they lived as man and wife but never married, I just don’t know. I’ll note that “Mrs.” Gussie Blackwell was the informant on Milas’ death certificate. She was listed as his foster daughter, not his wife. She was listed the same way in his obituary. Whatever the case, Milas’ brother Blaine was heartbroken because he had always had a crush on Gussie.

Milas and others in the home used Bruton Snuff. The smell in the house was pungent, particularly in the winter. As they spit in the stove or fireplace, the steam was powerful. Milas always had a house full of cats which were sick a lot the year he died. It was believed after his heart problem, Milas became sick with the same illness the cats had and died. Milas did not drive. When he had to go anywhere, he hired a neighbor or relative to take him.

Milas was a pillar for the rest of the family. He never moved, living on his farm after he married for the rest of his life. When his brothers and sisters had problems, they always knew Milas would listen. Tommy heard that after Milas died, Gussie started drinking with a neighbor friend. She sold the farm for $3,500, moved away, and was never heard from again.