The 52 Ancestors theme this week is “future.”

Everyone wants to be home for Christmas, surrounded by the ones you love, baking sweet treats together and sharing family traditions with Christmas carols playing in the background. But what happens when that’s not possible? Last week I told you how Johnnie Marston kept up the tradition of sending holiday greetings to his family via V-mail during World War II. This week I want to tell you how he celebrated Christmas in December 1944. Yes, I know I’m supposed to be talking about the “future” but don’t worry, I’ll work that in.

Seventy-five years ago today, The Atlanta Constitution reported that one Georgian had been killed in action, one was missing, and 65 had been wounded. Johnnie was one of the wounded, although his injury had actually happened earlier in the Fall. 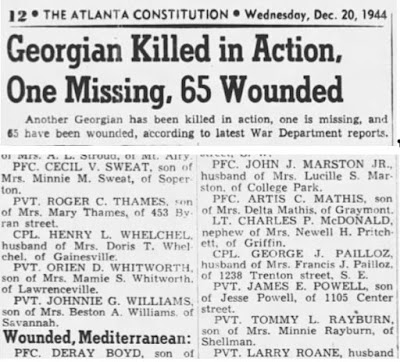 The following day, Johnnie’s wife Lucile received a letter from Ellis Arnell, the Governor of Georgia, expressing his sympathy and appreciation for Johnnie’s service to the country. Lucile also received a letter dated December 21, 1944 from the Atlanta Chapter of the American Red Cross expressing their sympathy upon learning of Johnnie’s injuries. By the time all of this was happening, Johnnie was already out of the hospital and back with his unit—Company B, 337th Infantry, U.S. Army.


It was Christmas 1944 and World War II was raging. Johnnie was in Italy, over 5,000 miles from his family. So that year, the Army was his family and they didn’t disappoint. The Army treated his company to a Christmas dinner just like they would have experienced back home. The menu included roast turkey, mashed potatoes, asparagus tips, cranberry sauce, giblet gravy, green peas, dressing, apple pie, coffee, mixed nuts, candy, and cigarettes. Each soldier received a program that listed the menu on the back and the names of all the members in his company on the inside. Johnnie and many of his fellow soldiers signed the front cover of his program—Wesley B. Wright, James B. McKinley, Pvt. Chas W. McBee, Pfc. John H. Marston “Georgia Boy,” Harvie L. Ellison, D. L. Cates, Sgt. Leo Pomana, Chas E. Lockard, Sgt. David Wood, Pvt. Roy J. McMurphy, P.F.C. E. Edd Alexander, James M. Lamn, P.F.C. Felton B. Smith, Dalton Ga. Ploy Boy, and Clyde W. McClain. 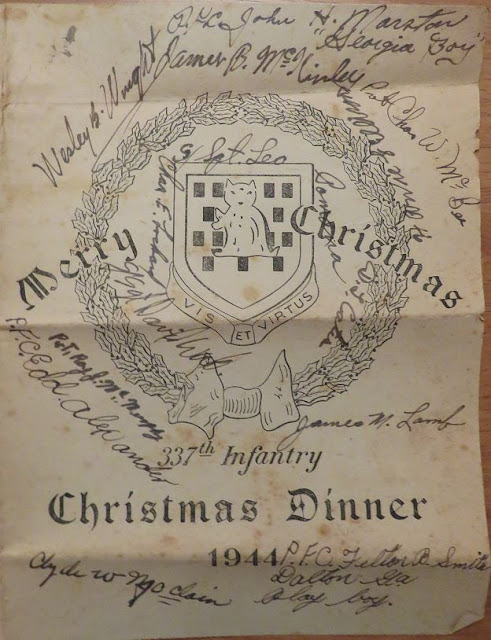 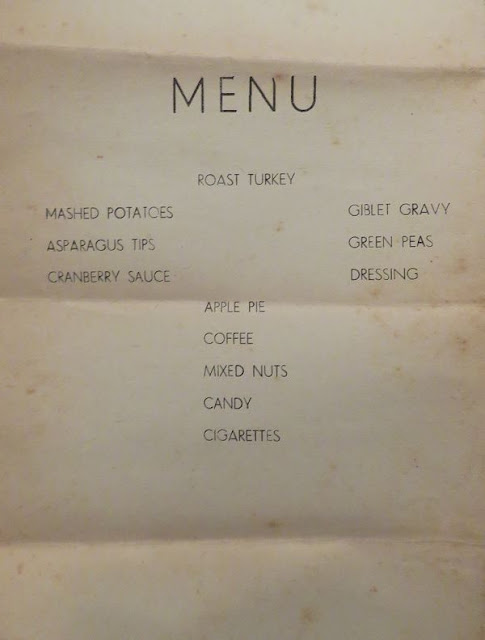 Johnnie must have sent his program home to Lucile and of course he wrote his trademark statement on the inside—I miss you a lot and I love you a million.

I bet Johnnie enjoyed this special Christmas dinner that day, but I wonder what was going on in his mind at the time. I’m sure he was thinking about his family back home. But what about his future. Was he worried about what it would bring? Would he survive the war? Would he make it back home to see his darling Lucile again? If you read his letters, you know that he wanted children so was he thinking about the family that he wanted to share with Lucile? If Johnnie looked far enough into the future, he would know that he did in fact survive the war and he and Lucile would go on to have three children. And if he looked further into the future, he would see that his son Randy would also spend a Christmas away from his family while serving with the U.S. Army.


This Christmas, let’s all take a moment to say a prayer for those serving our country on foreign soil and can’t be home with their families. And let's all pray that their future brings them back home safely.

You can learn more about Johnnie at the following links:

Sending love via a Valentine V-mail