Keeping up a tradition via V-mail during World War II

The 52 Ancestors theme this week is “tradition.”

In April 2018, my brother-in-law Randy shared 340 letters, V-mail, and postcards his father Johnnie Marston wrote to his mother Lucile Stacks Marston. The letters began after Johnnie met Lucile in July 1939 and ended in October 1945 at the end of World War II. Johnnie lived in Atlanta, Georgia; Lucile lived in College Park, Georgia, a 10-mile drive by today’s standards. Johnnie didn’t have a car or a telephone, so between visits, he communicated with Lucile by sending letters and postcards. During the war, Johnnie continued his letters to Lucile and also wrote other family members. Lucile saved them, keeping them locked away and private during her lifetime, including letters Johnnie wrote to her father and mother, Sam and Leola (Lemons) Stacks, whom he dearly loved.

In November 1942, Johnnie joined the U.S. Army, serving with Company B of the 337th Infantry. In December, he shipped to Camp Howze in Texas for training. From there he went to Louisiana, and then in January 1944, he was off to New Jersey before being shipped overseas. In December 1944, Johnnie’s company was under continuous training in Italy. The 337th regimental “Report of Operations” for the period December 1 – 22, 1944 notes:


Training was continued in the Gagliano tent area during the month of December. The daily schedule included scouting and patrolling, small unit tactics, mine training, physical conditioning, night exercises, weapons training, and other subjects in which deficiencies had been noted in combat. Special attention was given to the training and orientation of replacements. The new men received two extra hours of instruction in basic subjects each day. Maximum use was made of the known distance and combat ranges which were established near Mount Calvi (8598). Tactical firing exercises in the attack were conducted for all rifle platoons and companies in which fire and movement were stressed.

Motor maintenance was given particular attention in an effort to have all vehicles in top condition for the next phase of operations. Special winter clothing including jackets, parka, bedrolls, waterproof suits, were issued to the Regiment and distributed. …

Sending Christmas cards has been a holiday tradition since Henry Cole sent the first Christmas card in 1843 in England. Shopping for Christmas cards, if that was even an option, would not have been high on Johnnie’s list. It was cold, with possibly snow on the ground, and his regiment was under constant stress to train and be ready for whatever came next in the war. But Johnnie still wanted to send seasons greetings to the people he loved back home. So, 75 years ago tomorrow, he wrote two V-mails to family, both dated December 14, 1944. V-mail, short for Victory Mail, was a process used by the United States military during World War II to ship huge quantities of mail to and from soldiers overseas. Letters were written on standard sized paper, photographed, and then transferred to microfilm for shipping. Once the microfilm made it to its destination, the letters were printed and cut to a 4 ¼ x 5 ¼ inch piece of paper and mailed to the intended recipient. This freed up space and weight for other cargo needed for the war.

Johnnie addressed one V-mail to the Stacks Brothers Lumber Company, the company owned by his father-in-law back in College Park. There was a small “Western Union” box in the bottom left corner where Johnnie wrote:


To: A Gang’s I Can’t forget
Johnnie 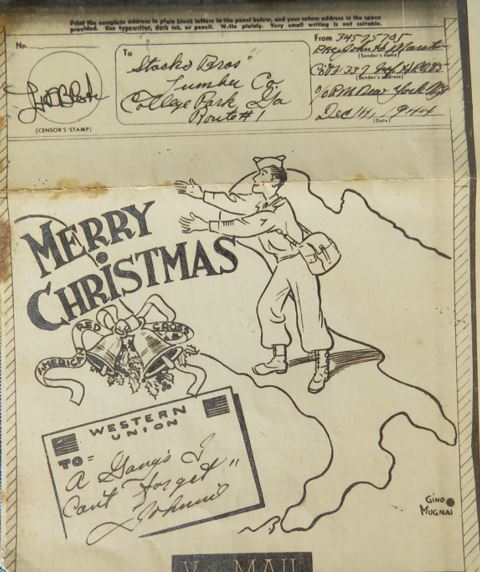 The second V-mail was addressed to Mr. and Mrs. Sam Stacks. This V-mail had the same image as the one addressed to the lumber company but in the Western Union box he wrote:


To: Mom and Pop Stacks
God Bless You Both
Love, Johnnie 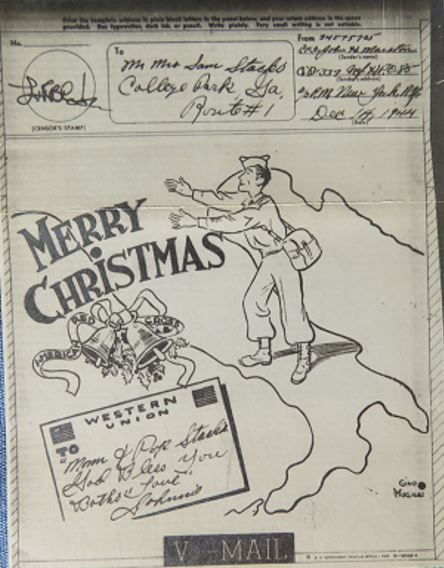 Johnnie was over 5,000 miles from home, fighting in the conflict of his life, but his family and friends were always close to his heart.

You can read more of Johnnie’s letters here and here.