Today’s post is about a couple of my husband’s treasures—a baseball signed by Mickey Mantle and a 1967 Topps baseball card featuring Mantle.

Charlie can thank my brother for the baseball. Michael and my niece attended the 5th Annual Southeast Regional Baseball Card and Sports Collectible Show in Atlanta, Georgia on November 30, 1991. Mickey Mantle was there signing baseballs so Michael picked one up for Charlie at the cost of $25. The picture below was taken that day. 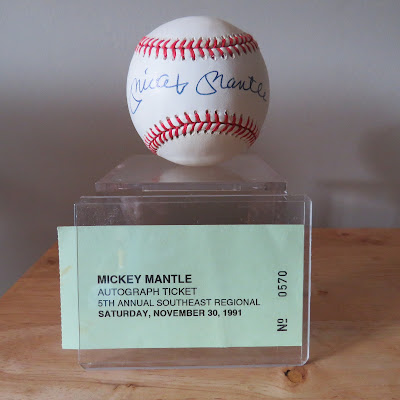 Charlie started collecting baseball cards when he was 10 using the allowance he earned from doing chores. He remembers a pack cost 10 cents at the time. He, his brother, and their friends spent hours thumbing through the cards. They looked at stats and learned about the players—how long they had played, where they were from, their age. Baseball wasn’t televised much then so that was one of the ways they learned about their favorite players.

They also played games with the cards. One game Charlie remembers was called Flip. He and his friends would sit on the porch and flip the cards out into the yard. When a card landed on top of another card, that person won all of the cards in the yard at that time. Charlie said you had to make sure you weren’t flipping one of your favorite cards! He forgot a few times and lost a couple of his favorites. Of course, they put cards on their bicycle spokes, which ruined them. I remember my brother and his friends doing the same thing.

One of Charlie’s favorite cards was of Frank Howard, a local player who played for the Washington Senators. Years later, our son met Howard through his work. Other favorite cards were Sandy Koufax, Don Drysdale, Johnny Bench, Willie Mays, and Willie McCovey. Charlie said he has about 600 cards from his youth but all aren’t baseball. He also collected football, Batman, Rat Patrol, and even the Monkees cards. He stopped collecting in his early teens, but picked it back up again in his 20s. I remember buying boxes of cards for Christmas presents several years. Today, most of the boxes are still unopened.

I’m sure Charlie considers both the ball and card family treasures.