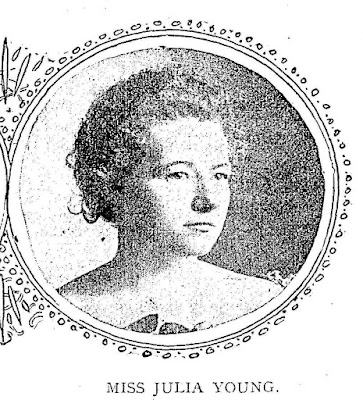 On June 7, 1880, the Young family lived in District 138 of Greene County, Georgia. Julia’s father was a farmer and her mother a housekeeper. Her sister Maude was the only child in the home attending school. There was a 12-year-old mulatto girl named Chancy Callaway working as a servant and laborer living in the home.

One of the prettiest weddings of the season will be that of Miss Julia Young, of Woodville, and Mr. Joseph B. Davison, of New Orleans, which will occur at the Baptist church in Woodville on the 20th instant at 6 o’clock in the evening. Dr. B. F. Riley, of the State university, will officiate, and Mrs. J. V. McWhorter will play the wedding march.

The church will be beautifully decorated in moss, palms, ferns, smilax and lilies of the valley. The bridesmaids will be: Miss Clyde Young, maid of honor, sister to the bride; Miss Bessie Davison, Miss Maggie Davison and Miss Pope Maxwell. The groom’s attendants will be Mr. Emmett Lunceford, of Monroe, best man; Mr. C. M. Young, of Athens; Mr. Will Sanford, of Crawfordville, and Mr. S. W. Durham, of Woodville.

The bride’s gown will be of white satin duchess trimmed in pearls and applique. She will carry white carnations. The bridesmaids will wear organdle dresses and will carry lilies and maidenhair ferns. The bride’s long vail will be confined by a diamond sunburst, gift of the groom.

Miss Young is a very handsome and charming young woman and has been the recipient of many attentions since her debut.

Mr. Davison is connected with the Illinois Central railroad at New Orleans. Immediately after the marriage the bride and groom will leave for New Orleans, their future home.

On June 13, 1900, Julia and Joseph lived on Duffosat Street in Ward 13 of New Orleans, Orleans Parish, Louisiana. As stated in the wedding article, Joseph clerked for the railroad. They had probably chosen the Duffosat Street house because it was near the shipping yards located along the Mississippi River. If you look at the birds eye view of the area in Google Maps today, you see lots of trains so it made sense for them to live there. Christmas in New Orleans that year was a joyous occasion with the birth of their first child, Joseph Jr. on December 16. Julia and Joseph didn’t stay in New Orleans long though. By 1905, they were living in Atlanta, 298 Central Avenue to be specific, where Joseph had taken a job as a clerk for the Bell Telephone Company. It’s possible Julia had moved back to Georgia to be closer to her mother who may have been ill. Sadly, Alice Young died in August 1906. She was buried at Bairdstown Cemetery in Bairdstown, Oglethorpe County, Georgia on August 14. In 1907, Julia and Joseph lived at 30 Augusta Avenue in Atlanta. Joseph worked as a traveling salesman for the Frank E. Block Company, a wholesale candy and cracker company. They still lived there in 1908 when their son Roy Benson Davison was born on May 15.

The unthinkable happened on October 15, 1913 when Julia’s husband Joseph died at their Augusta Avenue home. The Atlanta Constitution ran a death notice that day that unfortunately included several inaccuracies. The first was the spelling of his last name—Davidson vs. Davison. Second, they listed a surviving daughter named Miss Bessie Davidson vs. his two sons, Joseph Jr. and Roy. Bessie was his sister. The third inaccuracy was the cemetery location—Bistown vs. Bairdstown. And the fourth inaccuracy was the death date. His tombstone lists it as October 15 yet the death notice said he died Tuesday night. It could be he died after midnight and they didn’t take that into account. It’s hard to say what happened here but it’s sure confusing!

Sadly, this wasn’t the only unthinkable event that would happen to this family. Less than two years later, Julia died in Atlanta on July 22, 1915 at the same Augusta Avenue home. Her remains were taken to Bairdstown via the Georgia railway the next day, followed by burial beside her husband at Bairdstown Cemetery. She was 36 years old, the same age her husband was when he died. 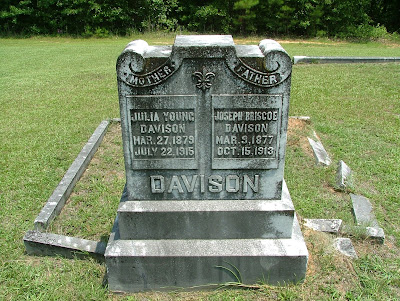 I don’t know what happened to Julia but she had prepared and filed her Last Will and Testament in Fulton County on April 15, 1915. Was she sick and feared she was dying? She had two small children to think about. Julia named James Davison as her executor and guardian of the property of her two sons Joseph Jr. and Roy. I believe he was her husband’s first cousin, son of James Davison and Ella Tiller. She named her sister Inda Young as their guardian and requested that Inda receive sufficient compensation from her estate to care for the boys. The will was recorded by George A. Merritt, Ordinary of Greene County, Georgia (and another Davison family cousin) on August 3, 1915. Joseph Jr. and Roy, now orphaned, were 14 and 7 years old respectively when their mother died.