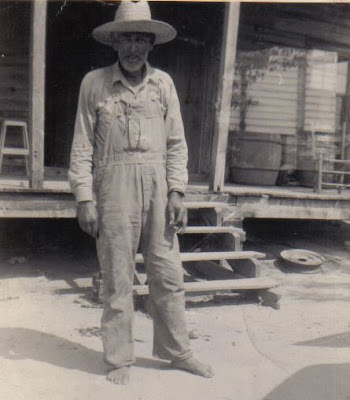 You might notice the “e” on Burnette comes and goes. That’s a common thing. We have the same issue with Lankford and Langford. I try to use what I find most in records but really, it could go either way whether a person spelled their last name Burnett or Burnette. Sometimes they use both versions of the name. Either works.

On June 6, 1900, the Burnette family lived in the Buncombe District of Walton County, Georgia. Joe, along with his brother Benjamin, were both working as farm laborers. Their father Samuel was a farmer so they were most likely working with him. Joe’s uncle, Abijah Burnette, lived next door, along with his wife Eugenia and daughter Rebecca. The census enumerator noted that Joe’s mother Virginia was the mother of 14 children, 12 of which were living. Census records provide the names of 13 of those children, which leaves me with the one unknown noted above. Of the 13 known children, I’ve been able to track all but two—Mathew and Annbelle. Both are listed in the 1880 census records and then I find no other record for them.

On April 25 1910, Joe and his family lived in the Broken Arrow District of Walton County. He worked as a wage hand on a farm. This census record is a puzzle for me. At age 22, Joe was still at home with his parents. The only other person in the home was a 27-year-old widowed “daughter” named Lula M. My research shows that all of the Burnette girls were married except for Mattie Lou by then. Born in 1881, Mattie would have been 29 years old in 1910. But with the name Lulu it makes me think it was her. Bottom line is I’m not sure what’s going on here. This obviously needs more research! Joe’s mother died in Georgia on January 10, 1916. Virginia was buried at Shiloh Primitive Baptist Church Cemetery in Loganville. Later that same year, Joe’s oldest brother John died in Liberty Grove, Lawrence County, Tennessee on November 28. John was buried at St. Truitt Cemetery in Liberty Grove. Joe registered for the World War I Draft in Walton County on June 5, 1917. At the time, he was living near Loganville. He listed his occupation as a self-employed farmer. He was single and noted that his father was dependent on him for his support. Joe was of medium build and height, had blue eyes, and light brown hair. The registrar who signed Joe’s draft card was Henry Allen Jones, who happened to have a connection to Joe. Henry was the nephew of wife of brother meaning he was the son of Henry Clayborn Jones Jr. who was the brother of my great grandmother Elizabeth Jones. Elizabeth was married to Thomas Terrell Burnette, Joe’s brother. On June 16, 1918, Joe married Lucinda “Lula” R. Weathers, daughter of Thomas Hamp Weathers and Aurora Abbott, in Walton County, Georgia. Joe and Lula had 7 children together over a 13-year period—John William Burnett, Joseph Benjamin Burnett Jr., Harold Lee Burnett, Benjamin Richard Burnett, Robert Lee Burnett, Dorothy Mae Burnett, and Ernest John Burnett.

On January 15, 1920, Joe, his wife Lula, son John and sister Mattie “Lou” lived in the Lindley District of Walton County. Joe was a farmer on a general farm, renting the land they lived on. Joe’s father Samuel died in Monroe, Walton County, Georgia on September 2, 1926. Samuel was buried beside his wife Virginia at Shiloh Primitive Baptist Church Cemetery in Loganville.

On April 9, 1930, Joe and his family lived on a rented farm in the Richardson District of Walton County. The census enumerator noted that Joe was 32 and Lula 18 when they married. He was unable to read or write.

On April 29, 1940, Joe and his family lived on Dial Mill Road in the Gum Creek District of Newton County, Georgia. The census enumerator noted that in 1935 they lived in Walton County. Joe and sons John, Joe Jr., and Harold were all laborers on a farm. Joe’s income at the time was $300. When Joe’s son Robert registered for the World War II draft on February 7, 1945, he listed Joe as the person who would always know his address. At the time, Joe lived at Route 3 in Loganville.

Joe's wife Lula died on August 26, 1952. She was buried at Bay Creek Baptist Church Cemetery in Loganville on August 28. Her birth year was incorrectly listed on her tombstone as 1906.

At age 72, Joseph passed away at his home in Loganville on May 6, 1960 after a long illness. His funeral was held on May 8 at Bay Creek Church in Loganville with Rev. E. L. Crowe and Rev. Jack Savage officiating. Following the service, Joseph was buried in the church cemetery. He was survived by his daughter Dorothy; sons Johnny, J. B., E. J., Harold, Ben, and Robert; seven grandchildren; and sister Mollie Burnette Allen. 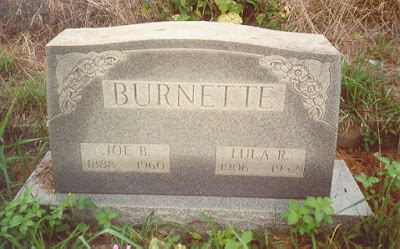