Following the trail to determine Arlie’s actual birthdate seems impossible. It starts with the 1900 census where the census enumerator recorded the date as May 1892. In both 1910 and 1920, the estimated birth year on Ancestry.com is 1893. Arlie’s World War I draft registration card has the date as 1893. In the 1940 census, it was listed as 1900. The Social Security Death Index lists his birth as May 8, 1892. And finally, his tombstone has the date May 5, 1891 engraved on it. These are the only records I have found to date. So, which is it? If anyone reading this has a record that can prove the date, I’d love to hear from you.

On June 11, 1900, the Rhinehart family lived in the 13th Civil District of Sevier County, Tennessee. Arlie’s parents had been married for 14 years. His mother was enumerated as having had five children, all of which were living. Arlie’s father was a farmer on a rented farm. His brother James, age 10, was a farm laborer. At age 8, Arlie was unable to read or write, nor was he attending school. Arlie lost his father at the young age of 15. William, young himself at 44, died in Tennessee on April 19, 1908. Arlie’s father was buried at Catons Chapel Cemetery in Sevierville.

On April 29, 1910, Arlie, his widowed mother, and three of his siblings lived in the 13th Civil District of Sevier County. His sister Malonia, now married to Ashley Sutton, lived next door with her husband and daughter Georgia. Arlie’s sister Hattie married James “Stewart” Shields (my great grandparents) in 1909 and they both lived in the Rhinehart home. Arlie’s mother was a farmer on a rented general farm with Ollie and James both being farm laborers on the “home” farm. Arlie and his brother-in-law Stewart were both farm laborers. Everyone except his sister Ollie could read and write. Sometime after 1914, Hattie and her family moved to Whitfield County, Georgia. Their sister Malonia became seriously ill and needed help taking care of herself and her children so they too moved to Whitfield County. About 1915, Arlie married Huldie Cross, the date, her parents, and marriage location unknown to me. By the time their daughter Malonia “Lonia” J. Rhinehart was born on November 17, 1916, they had moved to Georgia. A week after Lonia was born (November 25), Arlie’s sister Malonia died in Georgia, probably Whitfield County. She was buried at Deep Springs Baptist Church Cemetery in Dalton, Whitfield County, Georgia, leaving three young daughters behind, ages seven, three, and one. When Arlie registered for the World War I draft in Whitfield County on June 5, 1917, he noted that he had a wife and child who were solely dependent on him for support, claiming exemption from the draft based on these dependents. At age 24, Arlie was a self-employed farmer working in Dalton. He was short and stout, had blue eyes and dark hair. The Rhinehart family didn’t escape the war though. From October 1917 until June 1919, Arlie’s brother Jim Rhinehart served in the U.S. Army during World War I. Shipped to France, Jim served with the 318th Field Artillery as a Wagoner in the Supply Company.

On January 8, 1920, Arlie, Huldie, and Malonia lived at Red Clay and Hopewell Road in Cohutta, Whitfield County where Arlie worked as a general farmer. I can’t find a record to prove it, but Arlie and Huldie must have divorced between 1920 and 1930.

Despite extensive census record searches on both the Ancestry.com and FamilySearch.org websites, I can’t find Arlie in 1930. I did find Huldie and their daughter Malonia living in Whitfield County’s Militia District 631 where Huldie was enumerated with her last name spelled Reinhardt and widowed. We know that Arlie was still living so I’m not sure what was going on there. Huldie lived two doors from my grandfather, Sam J. Holland, and his first wife Opal. Next door to Sam was Arlie’s future brother-in-law’s uncle, Milas O. Shields (Hattie’s brother). Arlie’s mother lived in the Upper Tenth District of Whitfield County with her brother George Sneed and his brother James lived in Sevierville. So, where was he? The record trail picks back up in 1933 when Arlie married Martha Jane Headrick, daughter of John LaFayette Headrick and Martha Rebecca Cotter, in Sevier County on April 15 in a ceremony performed by L. W. Clark, Minister. No children were born to this union.

On April 26, 1940, I found Arlie and Martha living in District 1109 of Catoosa County, Georgia. The census record notes that they had been living in the same house since 1935. Arlie was working a 40-hour week as a helper on a private farm. By the time the Chattanooga city directory was published in 1942, Arlie and Martha had moved there and lived with my mother and grandfather Sam Holland in a rental home at 1408 Fagan Street. Arlie worked as a helper for Smith’s Transportation Corporation, the same company Sam worked as a driver. Arlie and Martha eventually settled in a house a block from Mama and her father. Sam’s World War II draft registration card, dated February 16, 1942, confirms that Arlie lived in the same house as Sam. It was probably around this time my grandmother Daisy Shields Holland accused Sam of taking Mama across state lines and had him arrested. He didn’t; Mama was safely at home in Chattanooga. It was Arlie, Daisy’s uncle, that bailed Sam out of jail.

Arlie’s mother Bettie died of breast cancer on July 23, 1945 at the age of 77 in Sevierville. She was buried two days later at Catons Chapel Cemetery in Sevierville.

At age 64, Martha died at Erlanger Hospital in Chattanooga on October 13, 1961 of a possible heart attack contributed to by coronary artery disease. She also had cecum carcinoma, a form of colorectal cancer. Arlie was the informant on Martha’s death certificate. Martha was buried at Mattox Cemetery in Sevierville on October 15. Arlie and Martha lived at 1610 South Orchard Knob Avenue at the time of her death.

Arlie lived a long life, dying in Chattanooga at the age of 93 on July 9, 1985. He was buried at Mattox Cemetery in Sevierville on July 12 in a service officiated by Tom Salmons. Arlie lived in Chattanooga for over 40 years and retired as a farmer. He was survived by his daughter, two stepdaughters, nine grandchildren, and seven great-grandchildren. 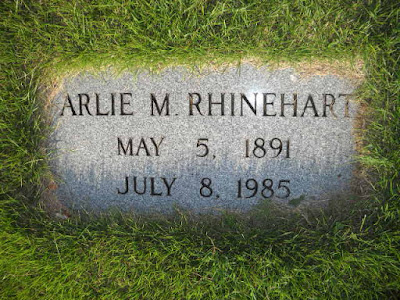 Arlie played a key role in my mother’s life during her early years. Mama and her father Sam Holland lived in Chattanooga, Tennessee when her mother Daisy (my Granny) left the family behind. Daisy was eventually declared unfit by the courts and Sam was granted sole custody of Mama. Daisy’s family were good people though and were there to help Sam raise my Mama. Daisy’s mother, Hattie Rhinehart Shields (a sweet woman we called Grandma Shields), was Arlie’s sister who lived in Tunnel Hill, Georgia, 25 miles from Chattanooga. Every weekend, Daisy’s brother Jim Shields drove to Chattanooga and brought Mama to Tunnel Hill with stay with her grandmother. Mama spent the summer months in Tunnel Hill as well. It was during the summer that Arlie and his wife Martha picked Mama up in their wagon and took her back to their house in Catoosa County for several days. Mama was only 6 or 7 years old at the time but remembers shucking corn. Some of the corn was taken to the grist mill for grinding into corn meal to make cornbread. Arlie had a different type of corn that was used to make popcorn. Mama remembers putting the kernels in a long-handled wire basket and shaking it back and forth over the fireplace until all the kernels popped. The fireplace was the only form of heat in Arlie’s house, he didn’t have electric heat. Apparently, the house didn’t have plumbing either. Mama said they saved the corn cobs for the outhouse to be used along with the Sears Roebuck catalog. Yes, she said they really did that. And then there were the pigs that Mama remembers helping Arlie feed. I’m sure corn was part of their diet. She remembers pulling ragweed and feeding it to them through the fence. She also remembers going to her Grandma Shields house and a group of men shooting a pig. The men tied the pig by its feet and hung it over an oil drum filled with water and then lit a fire underneath the drum to heat up the water. Once the water was hot enough, they dropped the pig into the drum for a short time, then pulled it out and scraped the hair off the skin. Mama, being a little girl, remembers this made her cry. The group of men most likely included Arlie, his brother-in-law James Stewart Shields (we called him Pappy), and brothers-in-law Jim and Paul Sam Shields. Once the pig was cleaned, they cut it up and hung it in the salt house for eating during the winter months, going in and cutting off what they needed for a meal. Mama remembers eating pork tenderloin with gravy and biscuits.

Every Saturday, Arlie’s wife Martha baked a cake. Mama said Martha made her stay outside while the cake baked in the wooden stove. Martha didn’t want Mama jumping around in the kitchen and cause the cake to fall. I remember Mama used to tell us to not jump around the kitchen when she had a cake in the oven as well. After Mama married and had my oldest sister, she and my Daddy separated. Mama and my sister moved to Tunnel Hill and lived with Grandma Shields. During that time, Mama made an overnight trip to Chattanooga to look for work and stayed with Arlie and Martha. In the middle of the night, she realized the bed was infested with bed bugs so got up and sat on the front porch the rest of the night. Mama was probably grossed out at the time but giggled as she recalled the story to me.

One of Mama’s cousins recalled Arlie being a story teller and said he told the best stories from his youth. She remembers him telling stories of working in a quarry and the technique used to split granite.