Lucinda Murphy, daughter of John Murphy and Joanna Ullom, was born on March 18, 1858 in Littleton, Wetzel County, West Virginia. Lucinda had four siblings that I’m aware of—William H., Louisa, Milley, and Mary Ann. There could be others, but more work needs to be done to determine that. Both of her parents were from Pennsylvania.

On July 6, 1860, two year old Lucinda lived with her family in the Knob Fork section of Wetzel County, Virginia. There was a 74 year old male living in the home named Elijah Ulom. Could Elijah be Lucinda’s grandfather? It’s possible. There was also a 27 year old woman named Lucinda Davis and an 18 year old woman named Martha Ulom living with the Murphy family. I have no clue who Lucinda Davis was but find it interesting that she also had the name Lucinda. Perhaps that was a common name in the 1860s or the Davis family was connected to the Murphy family and little Lucinda was named for big Lucinda. Martha Ulom was most likely a relative to Joanna, as was Elijah.

On August 4, 1870, Lucinda and her family lived in the Center Township of Wetzel County; the post office was Knob Fork. There was a William Davis, age 20, living in the home. His occupation was listed as farm laborer. I’m trying to figure out who the Davis’ are. Lucinda Davis lived with them in 1860 and William Davis lived with them in 1870. There must be a connection. Census records show that Lucinda was born in Virginia, which later became West Virginia when it was admitted to the Union on June 20, 1863.

On April 2, 1876, Lucinda married Robert Church, son of Henry Church and Rebecca Longwell, in Wetzel County. Lucinda was 18 years old, Robert was 25. Together they had 13 children—George, Samuel C., James Benton, Jennie F., Anna B., Dessie, Charles Cleveland, Martha, William Henry, Donald Roy, and Presley. Two children are unknown to me but enumerated in the 1910 census record. They most likely didn’t survive.

On June 5, 1880, Lucinda, Robert, and son George lived in the Church District of Wetzel County. Lucinda was keeping house and Robert was a farmer. They lived next door to Robert’s brother, Henry, and his wife Rebecca (Longwell) Church. I assume that Lucinda and Robert named their son after his uncle, or more likely, the string of Henry’s in the Church line, beginning with Henry “Old Hundred” Church. Robert’s oldest brother, William Henry Church, lived two doors down.

On June 9, 1900, Lucinda, Robert, and nine of their children lived in the Church District of Wetzel County. Lucinda has lost a child, George, as the census record shows that she was the mother of 11 children, 10 of which were living. Samuel, James, and Charles were helping work the farm.

On April 28, 1910, Lucinda, Robert, and five of their children lived in the Clay District of Wetzel County. Lucinda apparently had two children between 1900 and 1910 that did not survive. The census record shows that Lucinda was the mother of 13 children, 10 of which were living. Lucinda and Robert have been married for 32 years. Lucinda was able to read and write. Dessie, at age 21, was still at home but working as a servant for a private family. Son Henry was a farm laborer on the home farm.

On January 14, 1920, Lucinda, Robert, and Charles lived in the Clay District of Wetzel County. She was enumerated as Lucindy. Her daughter Dessie and her family lived next door. The family was still farming.

On April 2, 1930, Lucinda, Robert, Donald, Presley, and Charles lived in the Clay District of Wetzel County. The census record shows they lived on a farm.

Lucinda’s son, Samuel C. Church, died at age 50 on June 22, 1931 in the Church District of Wetzel County. Her husband Robert died on November 29, 1932 in Littleton. Both were buried at Thomas Chapel Church Cemetery in Wetzel County. 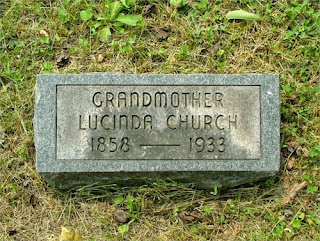 Lucinda died on January 13, 1933 in Littleton and was buried at Thomas Chapel Church Cemetery. The Wetzel Democrat of New Martinsville, West Virginia published her obituary on January 19, 1933: “Last rites for Mrs. Lucinda Church, aged 74 years, were held from the Thomas Chapel M. E. Church on Sunday afternoon with Rev. Eismon officiating. Interment was made in the Thomas Chapel Cemetery. Mrs. Church died Friday morning January 13th, following a serious illness of only three days. Mrs. Church was a lifelong resident of this county, being born near this city in 1858. Her husband, the late Robert Church, preceded her in death by only six weeks. The deceased was a daughter of John and Joanna Murphy, pioneers of Wetzel County. She was a member of the M. E. Church. Surviving are nine children: James Church of Hundred, W. Va.; Henry Church of Kodol, W. Va.; Charley Church, at home; Presley Church of Littleton, W. Va.; Donald Church of Clarksburg, W. Va.; Mrs. Dessie Murphy of Littleton; Mrs. Jennie Davis of Weston, W. Va.; Mrs. Martha McIntire and Mrs. Anna Evans, both of Clarksburg.

Lucinda was my husband’s great-grandmother.
Posted by Denise at 5:52 PM