On June 1, 1900, Mary and her family lived in Woodville, Greene County, Georgia. Mary’s father was a farmer. Her brothers James, Nathan, and Vincent were enumerated as farm laborers so were most likely helping their father on the farm. Oliver and Della were both attending school. The Lankford family lived next door to Julius C. Wilson and his family. Julius, Mary’s paternal first cousin, was the son of Emma Lankford and James L. Wilson. Emma was Mary’s aunt, sister of her father. Charles C. Davison and his family lived two doors away. Charles and Mary had a connection, although not direct. Charles was the stepson of Mary’s 1st cousin 2x removed. 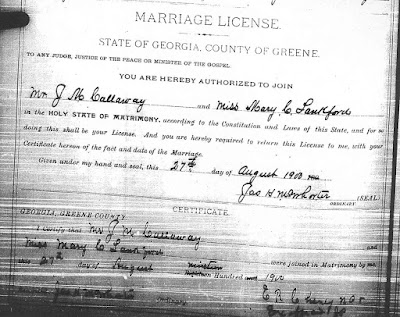 Mary’s father died in Greene County on January 21, 1908. He was buried at Penfield Cemetery in Penfield, Greene County, Georgia.

On April 23, 1910, Mary, Jack, and their five children lived on West Street in Penfield. Jack, who was enumerated as John, was a farmer on a general farm. Both Mary and Jack were able to read and write. Mary’s youngest child at the time, Felton, was six months old. Mary’s mother died in Penfield on March 26, 1919. She was buried beside her husband at Penfield Cemetery. Mary was pregnant with her son Julius at the time.

On January 24, 1920, Mary and her family continued to live in Penfield. Seven of her nine children, ages 18 to 6, were helping her and Jack work on the home farm. Mary’s sister Julia died on September 2, 1924 at the age of 49 in Wilkes County, Georgia from an enlarged spleen caused by leukemia. Julia was buried the next day at Resthaven Cemetery in Washington, Wilkes County, Georgia. Her brother James died on December 22, 1929 from chronic interstitial nephritis in Tryon, Polk County, North Carolina. His body was brought home and buried at Penfield Cemetery. 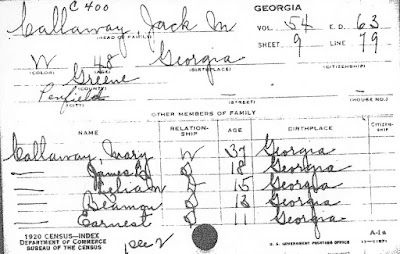 On April 25, 1930, Mary and Jack started their third decade living in Penfield. Seven children, four of them adults, were still living at home—Beman, Ernest, Felton, Willie, Jessie, Reuben, and Julius. It appears that no one in the home was working at the time as they were all enumerated with an occupation of “none.”

By April 9, 1940, Mary and Jack left Penfield and had moved to Main Street in Greensboro, Greene County, Georgia. Their youngest son Julius still lived at home, along with a 12-year-old grandson named Bennie. Interesting to note that 22 years later (1962) Mary’s obituary listed Bennie as her son, not grandson. It doesn’t appear that either Mary or Jack were employed at that time. Julius, at age 20, was an inspector in a textile mill. Mary’s son Ernest lived next door and another son James lived next door to Ernest. Just eight days after the 1940 census was taken, Mary’s husband Jack died at home in Greensboro (April 17). His funeral was held at the Penfield Baptist Church on Friday, April 19. Jack was buried at the Greensboro City Cemetery.

Mary’s son Felton died in Fulton County, Georgia on March 16, 1950. He was buried at Greensboro City Cemetery. It seems this started a string of deaths in the family during the 1950s. Just over a year after the loss of Felton, Mary’s sister Jessica (aka Jessie) died at home in Greensboro on August 1, 1951 after an illness of 10 days. She was buried the next day at Penfield Cemetery. The year ended on a sad note when another sister (and my great-grandmother) died on December 5 at the home of her son, Homer Callaway, in Union Point, Greene County, Georgia. Alice was buried at Penfield Cemetery the next day. Four years later, her son Earnest died at his home in Greensboro on May 17, 1955 following a long illness. Earnest was buried at Greensboro City Cemetery. In just under a year, Mary’s brother Vincent died in Greensboro on June 17, 1956 from congestive heart failure and pneumonia due to hypertensive and arteriosclerotic cardio vascular disease. Vincent was buried on June 19 at Walker United Methodist Church Cemetery in Veazey, Greene County, Georgia. And finally, just over a year later, Mary’s brother Oliver died at Grady Hospital in Atlanta on August 21, 1957. He was buried on August 24 at Penfield Cemetery. 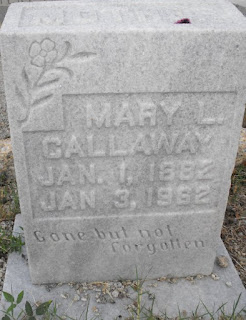 Mary celebrated her 80th birthday on January 1, 1962 and sadly died suddenly two days later at her home on South Main Street in Greensboro on January 3. Her funeral was held the next day at the First Baptist Church in Greensboro where she was a member. Mary was buried beside her husband at Greensboro City Cemetery. She was survived by daughters Leila and Jessie; sons James, John, Willie, Reuben, Julius, and Bennie; sister Della; brother Nathan; 22 grandchildren; and 14 great-grandchildren. M. D. Weinstein, W. B. Caldwell, R. M. McCommons, Miles W. Lewis, George Mullins, and Lewis Brown served as pallbearers.
Posted by Denise at 7:59 PM