Last Friday, January 12, would have been my in-laws (Earl and Mary (Athya) Murphy) 67th wedding anniversary. In this blog post, I’ll write about three milestone anniversaries we shared with them.

Mary’s family lived in the Pittsburgh, Pennsylvania metropolitan area before moving to Warren, Ohio. It was in Warren that Mary met Earl at a pizza parlor (maybe really a beer joint) around 1950. I’m not sure of the exact date but do know that Earl was granted a divorce from his first wife on August 26, 1950. Mary’s father (George Athya) was a union organizer in the Pittsburgh area. Earl worked for a union and wanted no parts of the organization. According to Earl’s recollection, George didn’t want Mary to have anything to do with Earl because he didn’t support the union. But that changed in one day when Earl and Mary’s brother (Jim Athya) picked George up at work. On that day, alcohol was involved somewhere along the line. We don’t really know what happened but after that day, Earl was allowed in the Athya household.

Earl and Mary were married in Rockville, Maryland on January 12, 1951. The following news clipping ran (date and newspaper unknown by most likely in Warren, Ohio):


Miss Athya Wed at Rockville, Md.—Mr. and Mrs. George Athya, 1019 Brier Pl. NE, announce the marriage of their daughter Mary to Earl L. Murphy of Littleton, W. Va. The double ring ceremony was performed January 12th by Rev. W. B. Walters of Rockville, Md. The bride is a graduate of Harding High School. Mr. and Mrs. Murphy are living at Herndon, Va., where the groom is employed by a gas company.


While they celebrated many anniversaries together, I only remember three—the 40th, 45th, and 50th. On the 40th, we had a small family party at their home. The photo below shows that Earl’s brothers Glenn and Raymond joined us that day. 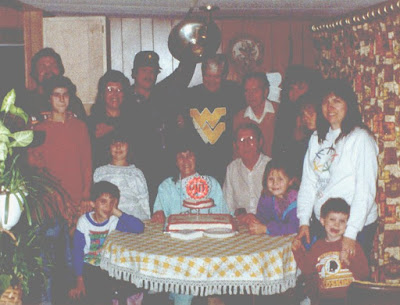 After their 40th anniversary, Mary was diagnosed with lung cancer. We weren’t sure what the future held for her so we decided to celebrate their 45th anniversary with another party. In hopes of creating something special for the celebration, we wrote to friends and family members requesting that they share any memories they had if they weren’t able to attend. We heard from quite a few people. Earl and Mary loved the book of memories and cards we presented to them that day. The following letter, written by Earl’s brother Raymond, is an example of what we received:

None of you could possibly understand the differences in the lifestyle of those of our age and yours, however, let me try to explain a few encounters and difficulties along the road the we encountered.

We as a family always had adequate housing, food, clothing, etc., however, never really enough compared to your present-day world.

We grew up in a small town where everybody knew everybody else, by family names and where they lived.

Earl was the younger of five (5) children and he was therefore always the “Little Boy” who you tried to run away from, or ignore as a pest. I know you can relate to that.

He was a good kid as “kids” go, but too small and young for us older knowledgeable teenagers (so we thought). He was held in check by Dad, Mother, Sister, and his older brother Glenn after 1940.

Ralph and Sis were gone but came home as frequent as possible. I left home for Wyoming in August 1940 and Earl was only 12 years old. During November 1940, we lost our Mother and I was only able to get back home two (2) hours prior to funeral. After four days on a Greyhound Bus, zero weather, snow storms unbelievable in the northwest, and broke, I arrived home to a very sad occasion. Three days after I had to again go back to Wyoming.

The death of our Mother created difficult times for Dad, Glenn, and Earl. Evelyn also had problems since her husband was in the Army. Ralph and I were both away from home. Things began to fall apart for the family, moving to other homes, money not very available, Dad’s health was not good and the previous family control of having a Mother. Somehow along the line we were always able to stay together as a family.

During August 1941, I returned from Wyoming and almost immediately left for Baltimore, Maryland to work in the Bethlehem-Fairfield Shipyards. Earl was still too young so he had to stay at home again. Since Dad was not in very good health, rumors had it that Earl was becoming a little on the wild side. His older brothers tried to tame the young stallion, but unable to report any results of our attempts.

In August of 1942, I joined the Marine Corps and left immediately for Paris Island, N.C. then California, etc. I did not return, only for periodic visits, until 1946. Earl then being 18 years old.

Glenn had gone in the Marine Corps and sometime later Earl left for the Navy. By that time, he must have had a very difficult time growing up being alone with Dad and “Pop eye,” and still trying to survive as part of a family. Reports again surfaced that he was still running around and having a good time but of course you must understand those were only rumors (Ha-Ha).

I stayed in Washington, DC after my discharge from the Marines in 1946. I visited home as often as I could, but to be truthful with you, I have forgotten all the “Good-Times” we had together, since life in those days involved a lot of work and sacrifices. After our Father died the household, for all practical purposes, collapsed at the base and fell apart as a unit. We all scattered and seemed to go our own way.

Finally, myself, Glenn and Earl all got jobs in Maryland, living in Kensington, we again became a family and got to visit each other. Since all the “Family” children are still living, we have continued our family relationship and have always enjoyed each other. We thank the “Big Man Upstairs” for this pleasure of life.

While the letter wasn’t specific to Earl and Mary’s marriage, it told us a lot about Earl’s early family life, which most likely helped shape his married life.

By the time Earl and Mary celebrated their 50th anniversary, she was suffering from emphysema. Instead of planning a party this time, my husband, boys, mother, and I, along with my brother-in-law and his wife spent the day with them.

If Mary’s father had gotten his way, my family would never have existed. But thankfully, things worked out for them and they were able to spend 55 years together.
Posted by Denise at 9:17 PM