They say deaths come in threes and that proved to be true for our Lankford family this summer. We lost my Aunt Alice Lankford Griffith on May 20, followed by her husband, my Uncle Lawrence Griffith on June 5. Both were 90 years old and had been living in a nursing home in Greene County, Georgia. And then it got personal when Daddy (Samuel Terrell Lankford) passed away just before 1 a.m. on August 24.

Daddy was 93-years-old, had dementia, and had been living in a senior care facility since 2013—first in an assisted living and then in a nursing home. He never wanted to live in a nursing home, but there was no other option for him. He fell in the driveway of his Riverdale house in March 2013 and broke his elbow. At that time, the doctor told us he was no longer able to live by himself so he was moved to an assisted living facility when he left rehab. I felt bad for him because he never got to go home to say a proper goodbye to his house. He loved his yard and spent hours planting and replanting. His yard was always the envy of the neighborhood. Even two years ago, you could show him pictures of flowers and he would call out the name of each flower. Dementia, what dementia! But what could we do? We all knew if he got back home, he wouldn’t leave so we couldn’t take him back there.

Daddy wasn’t a good patient and before long, was no longer able to walk. He wouldn’t do the physical therapy or help himself and he was argumentative with everyone. We all knew it was the dementia. Over time, the dementia progressed and in December 2015 we were notified by the assisted-living facility that they could no longer care for him. At that time, he was moved to a nursing home where he lived for the next three and a half years. Every time I went home to Atlanta for a visit, I could see he was fading away. He would tell me the same stories he’d told for years about growing up in Greene County, time spent in the Navy, and early adulthood. But he couldn’t tell me what he had for breakfast or lunch that day, though he’d always add “but it wasn’t good.” Around October 2016, I realized he remembered who his siblings were but didn’t remember that some of them had died. When I visited him, every day he’d ask “who’s dead” and it was a surprise every day which ones were. Sometimes we’d have that same conversation 10 minutes later. Then the next day, we’d go through the same routine again. When my sister told him earlier this month that Aunt Alice and Uncle Lawrence had recently passed away, he argued with her and told her that he had talked to some of them the day before. He often told us he wanted to go home to Macon Drive. He didn’t remember that he moved from that house in the 1980s. Sometimes he’d tell us that Mama was going to come take him home and take care of him. I’d just say “that’s nice” knowing full well that they divorced in 1980 and that wasn’t going to happen! But she sat beside me at the graveside service, there supporting the five of us.

In October 2017, my son Chris brought Daddy a Fanta Orange soda. I don’t think he got soda in the nursing home and he seemed to enjoy it. The next day Chris brought him two sodas—orange and watermelon. He held them out and told Daddy to pick one. Daddy grabbed the watermelon soda and then handed it back to Chris asking him to open it for him. Daddy used to buy watermelon soda for himself and Chris remembered that. They bonded over watermelon soda. My boys last saw Daddy in October 2018 and I remember the smile that appeared on his face as soon as he saw them. I could tell he knew who they were when he started picking on them like he used to. My husband and I last saw him in April this year and he still knew who we were. But this past year has been hard on him after he fell out of his wheelchair transferring to the bed and broke his leg. It went downhill from there.


I haven’t had a good cry yet and am not sure I will. Because he lived in Georgia and I live in Virginia, I’ve only seen him two weeks a year for the last five years. Calling him on the phone wasn’t an option so I’m used to going months without talking to or seeing him. I’d say my goodbyes each visit when I left town, not knowing if he’d still be alive when I returned.

Daddy always said he was going to live to be 110 years old because he had a lot of people to piss off. But God had other plans for him and he only made it to 93. For months, I’ve prayed every day that Daddy was having a good day and that he wasn’t in any pain. He told me once he didn’t want to be in pain so I didn’t want that for him. But the last two and a half weeks of Daddy’s life were painful for him. One sister told me she could tell he was in pain because he clinched his fists and face the whole time she visited him in the hospital that last week. When another sister called to tell me they were taking him off the ventilator, I prayed that God would take him quickly so he didn’t suffer. He heard my prayers and took him home that night. Now Daddy, Aunt Alice, and Uncle Lawrence are all three at rest in Georgia’s Bairdstown Cemetery. May they all rest in peace. 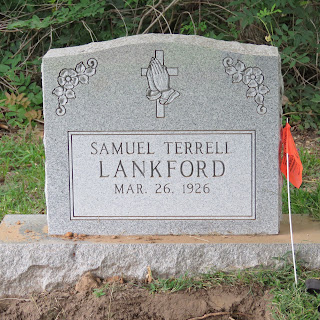