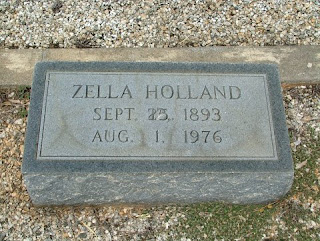 The 52 Ancestors theme this week is “mistake.”

By the time Zella was born, her family had already suffered the loss of twin sisters Neva and Eva in 1890. The twins were buried at Neals Creek Baptist Church Cemetery in Anderson.

On June 12, 1900, Zella and her family lived in the Broadway Township of Anderson County, South Carolina. She, along with sisters Lessie and Lena, and brother Walter were all attending school. Her father was a farmer. The census enumerator noted that her parents had been married for 16 years and that her mother had eight children, six of which were living. Zella’s 71-year-old widowed paternal grandfather Elijah M. Holland lived in the home with them.

On April 29, 1910, Zella and her family still lived in the Broadway Township of Anderson County. Her mother had given birth to one more child, Mary. At age 16, Zella was working as a farm laborer on the home farm. Sometime between the time this census was taken and January 1915, Zella moved to Montezuma, Macon County, Georgia. Zella attended school and graduated from the Georgia-Alabama Business College in Macon. She came home for a visit during the holidays in 1914, returning to Montezuma by January 10, 1915.

On January 9, 1920, Zella lived as a boarder with the William R. Hicks family on Dooly Street in Montezuma, Macon County, Georgia. She was 26 years old, single, and a stenographer in a law office. There were three other boarders living in the home with her. Zella’s mother died suddenly in Anderson on January 29, 1929. Two weeks later, on February 12, her father died after falling out of a tree he was trimming in his yard the day before. Both of Zella’s parents were 71 years old and both were buried at Neals Creek Baptist Church Cemetery in Anderson.

On April 3, 1930, Zella was still living with the Hicks family on Dooly Street in Montezuma. She continued to work as a stenographer in a law office. Sometime in late April 1931, Zella was hospitalized at the Anderson County Hospital for an unknown illness. She was back home to Georgia by May 1.

Zella was still living with the Hicks family and working as a stenographer on April 2, 1940.

By 1957, she had moved back to Anderson and was living with sisters Addie, Lessie, and Mary at 207 Crayton Street.

Zella was a member of the Wade Hampton United Daughters of the Confederacy.

On July 5, 1974, Zella’s 89-year-old sister Lessie died. Just over two years later, Zella died in Anderson on August 1, 1976. She was 82 years old at the time of her death. Both Lessie and Zella were buried at Neals Creek Baptist Church Cemetery in Anderson along with other family members.

Now to address the theme for this week. You can see on Zella’s stone that the carver made a mistake on her birth date numbers—two sets of numbers, overlaid—22 and 15. So if you didn’t know what date she died when you visited her grave, you’d walk away confused. I’m surprised the stone carver didn’t have to re-do the stone. 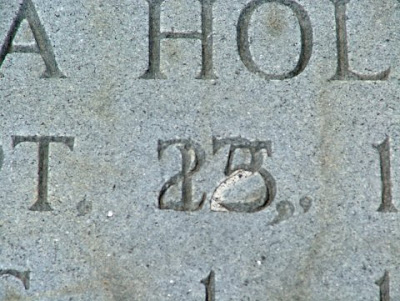 There were also three mistakes in the obituary that ran in The Greenville News on August 3, 1976. The first mistake was in her name—she was listed as “Mrs.” Zella Holland. This was wrong because she never married. The second mistake was her father’s name. He was listed as William Harry Holland when his middle name was actually Perry, not Harry. And the third mistake was the name of the church. Twice they referenced Mills Creek Cemetery, which should have been Neals Creek. I wonder what she would have thought about all of these mistakes!