“So many people helped my kids when they were growing up,” … “I just thought that it would be nice to give back. I just want to be that kind of person to other people.”
– Fay Lankford

I remember reading this quote in a Clayton County News Daily article written in June 2002 by Jonathan Heeter and finally understanding what drives my Mama, Fay Lankford, to volunteer.

In honor of Mother’s Day this weekend, I’m kicking off a short series I have planned to highlight some of her volunteer activities. Mama has helped others for many years. My earliest memory is from the early 1960s when she volunteered for the March of Dimes. Initially she stuffed envelopes for the Marching Mothers who went door to door in their neighborhoods, collecting money for the program. Later she was the local chairwoman, gathering the money they collected. She sold newspapers for our school’s Parent Teacher Association and helped the band boosters with “dime a dip” suppers where parents brought in covered dishes and then sold single servings for a dime. After she retired, she joined her local senior center. But she didn’t just attend, she helped them grow and develop programs for the seniors. She joined the Kiwanis and helped them raise money to benefit school children and battered women. She volunteered during the 1996 Atlanta Olympics. And she volunteered with the Red Cross whom she helped locally and nationally. This post is about one of the national events she volunteered for.

It was July 2002 and my husband, two sons, and I were in Atlanta visiting my family. Near the end of our visit, Mama got a call from the Red Cross. The Biscuit Fire, the “largest wildfire in the recorded history of Oregon” was raging and they needed help. The fire had started in California and Oregon after a series of lightning storms started “hundreds of small wildfires.” There were limited crews to fight these new wildfires as firefighters were already busy fighting major fires in Arizona, Colorado, and New Mexico. Because of that, the fire that started in California and Oregon “began to burn out of control.” Meanwhile, another large fire known as the Florence Fire was burning “approximately 30 miles north of the border.” It “eventually joined what was known as the Sour Biscuit Fire, which was burning very close to the border.” Together, they became the Biscuit Fire and history was made. According to Wikipedia, “the Biscuit Fire was a massive wildfire in 2002 that burned nearly 500,000 acres in the Rogue River–Siskiyou National Forest, in southern Oregon and northern California, in the Western United States.” It was not contained until the end of that year.

The Red Cross was calling its volunteers to help feed people affected by the wildfires. Mama was a trained member of the American Red Cross Disaster Action Team and didn’t hesitate to say yes when they called her. As soon as she hung up the phone, she started packing her bags. She was scheduled to leave the next day for a two-week mission. Originally, Mama was supposed to make the trip with her best friend Sue Jester, who was also a trained member of the team. They were told to meet someone who would have their plane tickets at the Atlanta Airport. Literally at the last minute, plans changed and Sue was told to go to Texas for another emergency so Mama boarded her flight out of Atlanta heading to Oregon alone. Once she arrived in Portland, Oregon, she boarded a six-seat single engine plane, which took her to Oregon City. The Red Cross had reserved a car and motel room for her so after picking the car up, she checked into the room and rested up for the second half of her trip. The following morning, Mama was on the road headed south on Interstate 5 by 8 am after eating a continental breakfast at the motel. She drove all day (272 miles), arriving in Medford, Oregon around 4 pm, about 30 miles from the California coast. At that point, she turned the rental car in and was assigned to an Emergency Response Vehicle (ERV), which would be her mode of transportation for the next two weeks.

The Red Cross assigned her and two men who lived just outside of Portland, to work as mass care technicians. Over the next two weeks, they spent their days traveling in the ERV, delivering hot meals to the people affected by the wildfires. The ERV was equipped with slots to hold the pans of food prepared by the Baptist Men’s Ministry, a group of men working through their church to help people in need. The Baptist men came in for a two-week mission, cooking things like fried chicken, various kinds of beans, corn, and spaghetti, outside on the church grounds. Mama’s routine quickly became one of eating the breakfast provided at the motel, waiting for her Red Cross team to arrive in the ERV, and then traveling to the church. On their way to the church every day, her team of three stopped at the “drive in and go” coffee shop to buy a cup of coffee. Mama remembers these as small coffee stands everywhere on the side of the road. She also remembers that the men always ordered the exotic coffee, which was probably coffee filled with flavored creams, maybe whipped. She normally only drinks her coffee black, but said during this time, she added sweet cream. Now as far as I know, she only drinks black coffee and it better be hot so I questioned her adding cream when she told me this part of her story. She laughed and said “well, it was pretty good.” Coffee in hand, they finished their drive to the church where the Baptist men were preparing the food. The team was assigned a route every day, sometimes the same as previously traveled. Mama and one man stayed inside the ERV preparing containers of food to hand to the second man who stepped outside the ERV once it stopped. His job was to pass the food to people. Mama remembers one day they were assigned to go to the Indian reservation. The Baptist men made a bunch of sandwiches that day instead of hot meals. Once the sandwiches were loaded on the truck, along with Budweiser cans filled with water, they left for the reservation. Upon arrival, the team was surprised to find out they weren’t allowed on the reservation—they had to leave the food at the gate. Also, to their surprise, the Indians wouldn’t accept the water because it was in beer cans. So, the team left the sandwiches and drove back to the church to pick up gallons jugs of water and returned to the reservation.

Lunch for the Red Cross team was whatever they served the masses each day. Near the end of the two-week tour, another church group invited all of the workers from the church Mama’s team worked with to join them for a steak dinner. Like lunch, a dinner of grilled steaks, beans, and potato salad was cooked outside and served from their truck tailgates. Mama said you never saw such pretty steaks in your life and it was so good, especially after all the fried chicken they’d eaten.

At the end of the two-week mission, Mama’s team took the truck to a drive through car wash and hosed it down, wiping it clean inside and out, before turning it in. She then got another rental car and she and her two team members headed north, towards Portland where the men lived. She dropped them off at their homes and continued to the airport where she caught a flight back to Atlanta.

While in Oregon, Mama didn’t get much time off but does remember going shopping at a Harry and David store during some downtime. She bought a jar of jam. On another day, the Red Cross offered a rental car to Mama’s team. Mama said one man’s wife had come to Medford to visit him so he wasn’t available, but Mama and the other man decided to go see the redwood trees which were within driving distance. At the last minute, someone from the Red Cross office needed the car and the offer was rescinded.

They were kept at a safe distance at all times. Mama said she could see the smoke in the distance everywhere, but never saw any actual fire. She received a certificate from the Red Cross signed by the National Chairman of Disaster Services and the Executive Vice President of Disaster Services recognizing her valuable service on the Oregon and California wildfires in July 2002. 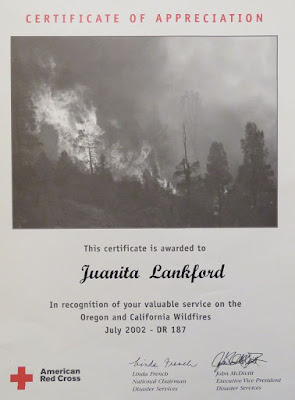 This was not her first rodeo—part 2 will tell how Mama helped the Red Cross support North Carolina after the floods caused by Hurricane Floyd in 1999.