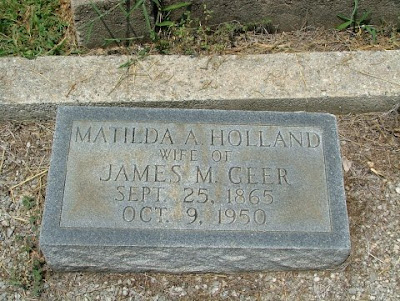 Matilda Armathine Holland, daughter of Elijah Major Holland and Jemima Kay, was born in Anderson County, South Carolina on September 25, 1865. Most records list her as Armathine, so I believe that’s the name she went by most of her life. There were seven children in Armathine’s family—Elizabeth Holland, Sarah Ann Elzira Holland, Doctor Carroll Holland, William Perry Holland, Matilda Armathine Holland, Robert E. Lee Holland, and Anda Holland. She is my 1st cousin 3x removed. Our nearest common relatives are John Holland and Elizabeth H. Majors. Her father Elijah was the brother of Leroy Thomas Holland, my 2nd great grandfather.

On August 16, 1870, Armathine and her family lived in the Belton Township of Anderson County. Her father was working as a farm laborer and had a personal estate valued at $745. Her brothers, Doctor (age 13) and Perry (11), were both working as day laborers. There is a male named Perry Holland, age 20, living in the home. I believe this may be Armathine’s uncle. My records show that her father had a brother that I list as George W. P. Holland, born about 1849 so the age would be right. I have no other information on him at this time but will certainly add him to my list to research. The family lived two houses from Rev. Robert and Frances (Holland) King, great grand uncle and aunt of Armathine. Rev. King was the 2nd pastor of Neals Creek Baptist Church in Anderson. Frances was the daughter of the Rev. Moses Holland, a drummer during the Revolutionary war and present at the surrender of Lord Cornwallis. He was Armathine’s 2nd great grandfather and my 5th great grandfather. 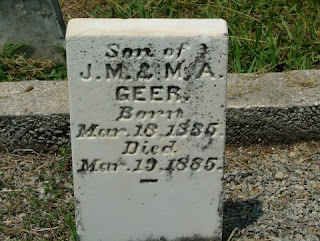 On June 28, 1880, Armathine and her family lived in the Broadway Township of Anderson County. Her father was farming with her brother Perry, enumerated as William, working on the farm. Armathine’s brother Doctor had married and was living next door with his wife Christianna and daughter Effa.

Sometime after the 1880 census was taken and by early 1883, Armathine married James Monroe Geer, son of James Geer and Martha Emeline Vandiver. They had two children together—James Furman Geer, born on September 12, 1883 in Anderson County and a second son, born on March 18, 1885. The unnamed son only lived for one day and was buried at Neals Creek Baptist Church Cemetery.

From what I gather, the Geer family were very involved in the church. On April 29, 1888, Armathine played the organ for the church choir at a Sunday School Union meeting held at Neals Creek. The church was filled to capacity, including many who listened from outside the church after being unable to get a seat inside. “The Rev. Mr. Whilden, an ex-missionary to China, and now pastor of the Williamston Baptist Church, addressed the Union on missionary work and exhibited two Chinese Idols.” Following the event, the congregation gathered outside for dinner furnished by some of the attendees.

The 1890’s were hard on Armathine. Just before Christmas 1891 (December 18), her husband came down with what was described as “a short but painful illness with pneumonia.” He died on December 18 at the home of Col. J. P. McGee in Hall Township in Anderson County at the age of 30 years. The notice published in the Anderson Intelligencer on December 24 noted that he “was an industrious, upright young man.” He was buried at Neals Creek Baptist Church Cemetery in Anderson. The decade ended with the death of Armathine’s mother on June 9, 1899 “at her home in Broadway Township” after being “an invalid for several years.” Her obituary, published in The Intelligencer, noted that her death “came as a relief to her sufferings.” At the age of 70, Jemima Holland was laid to rest at Neals Creek Church Cemetery in Anderson where she “had been a devoted member” for many years. Jemima’s obituary noted that she had six surviving children at the time of her death. I haven’t been able to document it yet, but I believe it was Armathine’s older sister Elizabeth that had died.

On June 1, 1900, a widowed Armathine and her son Furman were living with Jesse McGee, a 74-year-old widowed farmer and the same person whose home her husband died in at the beginning of the decade in the Hall Township of Anderson County. Armathine was enumerated as a housekeeper and the mother of two children, one of which was living. Furman was enumerated as a 16-year-old servant and farm laborer. Armathine’s son Furman married Beulah C. Poore, daughter of Thomas Drayton Poore and Nancy Louise Martin, on January 15, 1908. At the time Furman was a “popular driver of the Ligon hose wagon of the fire department.”

On April 22, 1910, Armathine continued to live with Jesse McGee in the Hall Township. She was enumerated as Mrs. M. A. Geer, widowed, and a maid/servant/housekeeper for Jesse. I believe that Jessie McGee died in 1911 at which time Armathine would have had to find a place to live. From at least 1915 to 1917, she was living at 108 East Market Street in Anderson.

On January 13, 1920, Armathine lived with her son Furman and his family on Jefferson Avenue in the city of Anderson. The Anderson city directory shows that she was living at 406 Jefferson Avenue in 1922, 1931, 1934, and 1936.Furman was a mechanic for a motor company and his wife Beulah was a saleslady at a dry goods store. Armathine had four grandchildren—James, Frances, Louis, and John Geer.

On April 11, 1930, Armathine still lived with Furman and his family on Jefferson Avenue. Furman was now a proprietor for an auto body shop. Beulah was no longer working, instead the grandchildren had started working. At 18, Frances was now working as a saleslady in a department store, 16-year-old Louis was working as a salesman at a drug store, and 12-year-old John was a newspaper delivery boy.

On April 16, 1940, Armathine was still living with Furman, however, they had moved to West Market Street. This was the first time Armathine was enumerated by her first name, Matilda. Furman was now working as a produce salesman. Her grandson John and his wife Edith were living in the home. John was now a cake mixer in a bakery and Edith was a waitress in a tea room.

Armathine died on October 9, 1950 at Six Mile Hospital in Six Mile, Pickens County, South Carolina. At the time of her death, she lived on Pine Street in Westminster, Oconee County, South Carolina. It appears that as a child, she went by Armathine. However, her death certificate, with son J. F. Geer as the informant, listed her as Matilda Holland Geer. Her obituary, which also listed her a Matilda, noted that “she was an invalid for the past fifteen years and a patient in the hospital for the past four months. Her husband, James M. Geer, died sixty-one years ago. She was a native of Neal's Creek Community in Anderson County and was a faithful member of Neal’s Creek Baptist Church.  She came to Westminster to live several years ago.” Armathine was survived by her son Furman, four grandchildren and nine great-grandchildren. Her funeral was held at Neals Creek Baptist Church with the Rev. M. J. Stancell officiating. Armathine was buried at Neals Creek Baptist Church Cemetery in Anderson. She was 85 years old.

What an unusual name she had. I wonder if she liked or hated it.