Sometime after the birth of Mary in about 1859 and before the census was taken in 1860, it appears that Newman’s father Clayton died. On September 21, 1860, Newman lived with his mother and siblings in the Berkshire community of the 405th District of Gwinnett County, Georgia. They lived next door to his maternal uncle Richard Davis Pounds and his family. 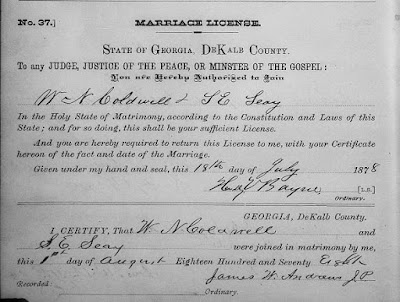 On June 7, 1880, Newman and Samantha lived in Rockmart, Polk County, Georgia. He was working on a farm while Samantha kept house. The census taker enumerated his as Wm. N. Colwell. Eight and a half years later, Newman and Samantha were finally blessed with a son they named William Melvin Caldwell. William was born in Georgia on January 18, 1889.

On July 9, 1900, Newman, Samantha, and Melvin lived in Stone Mountain, DeKalb County, Georgia. Norman and Samantha had been married for 22 years. This census record confirms that they had only had the one child, Melvin. Newman was a farmer. Samantha’s birth year was listed as 1860, different than the 1858 that was engraved on her tombstone. Newman’s mother Margaret died in Georgia on February 19, 1905. She was buried at the Pounds Cemetery in Lilburn, Gwinnett County, Georgia.

On May 3, 1910, Newman, enumerated as William N.,” was still living in Stone Mountain. He was a farmer on a home farm. Newman and his wife had been married for 31 years. His son Melvin had apparently just gotten married and he and his wife Willie lived in the home as well and was working on the home farm. Newman was surrounded by family with his brother Robert and his family living on one side of his house and his widowed sister Mary and her family living on the other side. One thing of interest on the 1910 census sheet—Newman’s house was dwelling number 93. Dwelling number 88 was the DeKalb County chain gang with 20 prisoners and one worker living there.

On January 10, 1920, Newman, his wife, son, daughter-in-law, and six grandchildren all lived together on Bairdstown Road in Woodville, Greene County, Georgia. The house, which he owned, was classified as a farm. Newman was enumerated as a farmer and his son as a laborer. Newman’s grandchildren were twins John and William (8), Roy (7), Fred (5), Jane (3), and Melvin (5 months). This would have been a busy household.

Newman’s sister Margaret died in Armuchee, Floyd County, Georgia of Influenza type C on February 8, 1930. She was buried at New Armuchee Cemetery in Armuchee. Two months later, the census enumerator visited. On April 15, 1930, both Newman, his wife, and his son William and his family were still living in Woodville, however, were now living in separate houses on Woodville Road. His son William and his family lived four houses away. There were three more grandchildren in the family—Mae (6), Mildred (4), and Curtis (2 months). At age 76, Newman was renting his home and had finally retired.

Newman died from bronchitis and cardiac asthma in Bairdstown, Oglethorpe County, Georgia on April 10, 1935 after nearly a month’s illness. His son William was the informant on his death certificate. Newman was buried at Bairdstown Cemetery in Bairdstown. 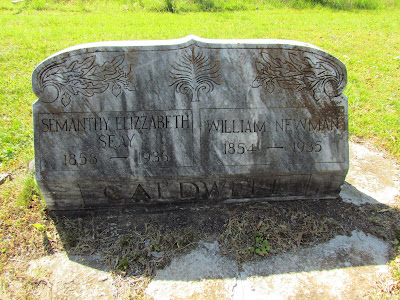