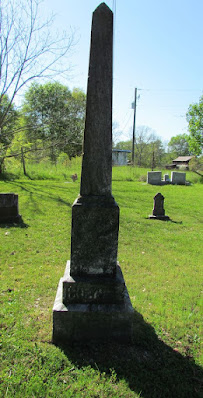 Muzette’s father Henry was a “widely popular citizen” in their community and a “veritable pillar” of Bairds Baptist Church in Bairdstown, which is where the census enumerator found the family living on June 5, 1880. Muzette was six months of age and the record noted that she was born in December. Her father was a farmer; her mother was keeping house. There were two servants living with the family in the home—a 17-year-old black female named Ida Brisco and a 47-year-old black female named Josie Craddock. They lived next door to Muzette’s maternal grandparents Thomas and Ann Jane (Briscoe) Callahan.

In August 1886, six-year-old Muzette performed at an exhibition held in the grove of the Bairdstown Academy. The exhibition took place on what was described as a pleasant evening and was attended by “ladies and gentlemen from Union Point, Crawford, Woodstock, Wilkes county, Gray Lands and other places.” It included a series of performances by the “popular Crawford band” and theatrical sketches of comedy and drama. An article published in the Georgia Home Journal on August 6, 1886 mentioned Muzette’s performance by name:


The “Sick Doll,” was a triologue, by little Miss Muzette Cheney, doll’s mother, and Miss Willie Wilson, doll’s friend, and Terry Wingfield, doctor. None of these were over seven years of age. The wee ones, in the delicate drapery of lawn set with nature’s own ornaments of bright flowers, their cheeks aglow with life and pleasure, their merry eyes sparkling with happy excitement, their locks—brown and golden—bewitchingly combed about their pure white brows, had to the reporter’s eyes the witchery of fairies.

The 1890s were hard on the Cheney family with Muzette’s mother losing two infants—Clara, born March 1891 and died September 1891 and the youngest child of the family, Henry, born August 1895 and died December 1895. Little Henry was apparently sick for some time before his death. As the oldest child (and daughter), Muzette would have helped her mother with the smaller children so the deaths of these infants were probably hard on her. Both infants were buried at Bairdstown Cemetery there in Bairdstown.

Muzette contracted typhoid fever sometime in 1904. Sadly, she died from the disease at 6 o’clock in the morning on July 8. Her funeral was held the next day at 10 o’clock in the morning at Bairds Baptist Church in a service officiated by Rev. J. D. Mell. Muzette was only 24 years old when she was laid to rest in Bairdstown Cemetery.
There is a tall obelisk monument and a stone marking Muzette’s grave in the cemetery. Although hard to read in my photos, the photo uploaded to her Find-A-Grave memorial clearly shows the words on the monument. The obelisk monument reads:

There’s a beautiful region above the skies
And I long to reach its shore.
For I know I shall find my treasuer [sic] there
The loved one gone before. 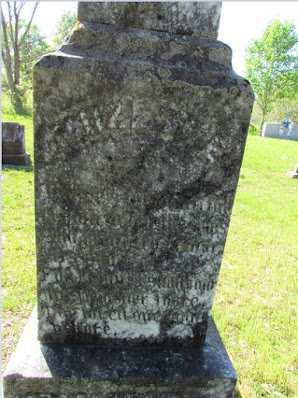 The stone lays flat on the ground and contains her birth and death dates, along with the names of her parents. I don’t know if it is part of the obelisk monument that has come loose or if it was an actual upright stone at one point and has fallen over. 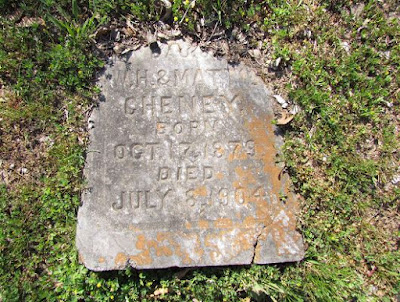