This blog post is the second in a series related to my Mama’s (Fay Lankford) volunteer activities. As long as I can remember, volunteering has been an important part of her life and I wanted to highlight some of what she’s done to serve others.

In September 1999, Mama and her best friend Sue Jester spent three weeks in Rocky Mount, North Carolina, a historic city located near the Tar River. Unfortunately, they weren’t there on a girl’s vacation, but rather a mission as mass care technicians supporting the Red Cross relief efforts for the floods caused by Hurricane Floyd.

Floyd, at one point a Category 4 hurricane, made landfall in the Cape Fear region of North Carolina as a Category 2. Torrential rainfall followed, causing widespread, historic flooding in the area which just weeks earlier had experienced torrential rainfall from Hurricane Dennis. Residents, who had been evacuated prior to Floyd making landfall, came back to utter devastation. Everything was lost—homes and all their possessions. Thousands were left homeless. Cars were destroyed, pushed around by the water. All of their household belongings had to be piled on the curb for pick up. Always there to help, the Red Cross called on its team of volunteers. Both Mama and Sue were recently trained members of the American Red Cross Disaster Action Team and they didn’t hesitate to accept this as their first national assignment. They were assigned to work together in Rocky Mount. After meeting a Red Cross representative at the Atlanta Airport to pick up their airline tickets, they boarded a plane to North Carolina. Upon arrival, they were picked up in a van and taken to the center they would work out of. Volunteers were interviewed one by one to determine pairings and were then divided into teams. Since they were friends, Mama and Sue were paired together.


Mama and Sue checked into a motel (they shared a room) located about 10 – 15 miles from the church that would be their focal point every day. They were assigned to an Emergency Response Vehicle (ERV), the truck used to feed the flood victims. Mama remembers a nice young man who stayed at the same motel but was not assigned to her team. He was wealthy and didn’t have work so instead, spent his time volunteering. The young man drove the ERV from the church to the motel the first night. Sue preferred to drive herself, so after that first trip, she took the wheel.

At the end of each day, Mama and Sue would get cleaned up and then go out to dinner. Mama remembers eating BBQ one night. She said they didn’t like it though—too much vinegar. She also remembers there being a lot of men from the Salvation Army at the restaurant that night who walked through the restaurant, talking to the volunteers. The remainder of their nights were spent in their room, watching TV. Mama said the young man played the stock market at night.

Tents and food preparation stations were set up on the church grounds. The Southern Baptist Men’s Association brought their own equipment—stoves, pots, and pans—and cooked large quantities of food outside. After returning from their daily food delivery, Mama and Sue helped wash the pots and pans for the men. Everyone worked long hours, usually at least 12-hour days, sometimes more. Mama and Sue had one day off during their mission, but they didn’t mind. They were happy to be helping. They served one meal a day – around 1 pm. Food was served to the flood victims in disposable divided food containers. In addition to handing out food, Mama and Sue prepared toiletry kits with items such as toothpaste, toothbrushes, razors, soap, and tissues. As they distributed food, they offered the toiletry kits, a wash bucket, mop, bottle of cleanser, and a roll of paper towels to anyone that wanted them. 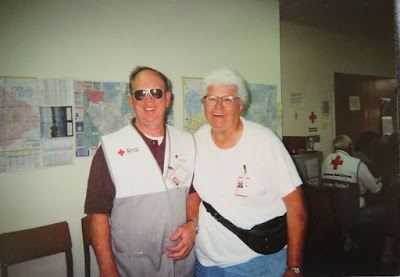 Mama remembers riding through neighborhoods where household items such as pianos, refrigerators, stoves, beds, and televisions were stacked on the side of the road. They passed a nursery school that had piled all the little chairs on the street to be hauled away in a dump truck. She remembers a man sitting on a bedsheet in his front yard, holding pictures of his family. Most of the houses were gutted. One was sitting in the middle of the road. Mama never saw any, but was told there were dead cows floating in nearby streets.

After returning home at the end of her three-week mission, Mama told a reporter for the Clayton Neighbor that she’d do it all over again. She received a certificate of appreciation from the Red Cross signed by the Vice President of Disaster Services and the Chairman of Disaster Services recognizing her time and dedication in assisting those affected by Hurricane Floyd in September 1999. They were proud of the work they had done to help the flood victims. 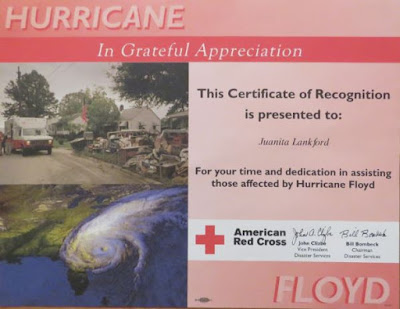 In Part 3, I’ll tell you about Mama volunteering to be a security guard during the 1996 Atlanta Olympics. If you missed my post about her support to the Red Cross during the Oregon and California fires of 2002, you can read that here.