Nancy Irene Holland, daughter of Marion “Scott” Holland and Frances Eleanor Williamson, was born in the Craytonville section of Anderson County, South Carolina on October 17, 1895. Large families tend to run in the Holland lines and this one was no exception. Her parents had 11 children. I can document 9 of them—Minnie Lee Holland, John William Holland, Isom Todd Holland, Arthur “Brown” Holland, Sudie (or Sula) Bell Holland, Emma Eldora Holland, Nancy “Irene” Holland, Eunice Maude Holland, and Julian Clair Holland. I’ve been told they had a son named Andrew who died in infancy but I have found no record to prove that so far. I’m not sure about the 11th child. Census records show a child named Nannie Amanda Holland but I believe this is actually Irene. Or perhaps she had a twin sister who died in infancy but that’s just speculation on my part. The bottom line is, I have no clue as to who this child was, only that census records show Irene’s mother had 11 children. Irene would be my 1st cousin 2x removed. Our nearest common relatives are Leroy Thomas Holland and Amanda Elizabeth Scott, my 2nd great grandparents.

On June 1, 1900, Irene lived with her parents and six siblings (John, Isom, Sula, Emma, Eunice, and Julian) in the Honea Path Township of Anderson County, South Carolina. She was enumerated as Nannie A. Holland. The census record shows her as age 4, born in October 1895. The Soundex Index card lists her as Nannie Holland, age 4, born in October 1899. Clearly something is wrong here. Her parents had been married for 20 years. Irene’s father was a farmer with brothers John and Isom both working as farm laborers. Her mother was enumerated as having had 11 children, 9 of which were living. John and Isom were the only children who were able to read and write at this point. Her brother Brown was not living with the family and I have yet to find him during that census year. My notes show that Andrew was born and died (in infancy) in 1900, but as mentioned above, I can’t confirm this. If he was born in 1900, it would have been late in the year because Julian was born in March 1900.

On April 28, 1910, Irene, her parents, and five siblings (Isom, Brown, Emma, Maud, and Julian) lived in Honea Path. Her father was enumerated as Scott M. Holland. This census year notes that Frances had given birth to 11 children and 9 were still living. Irene’s father was a farmer on a general farm. Her brothers Isom and Brown (once again living with the family) were farmers on a home farm. Irene’s sister Minnie lived next door with her husband Walter M. King, and five children (Annie, Frank, Max, Evelyn, and Howard). Irene was just 17 years old when her mother died in Anderson on December 11, 1912. She was buried at Bethany Baptist Church Cemetery in Belton, Anderson County, South Carolina. On May 24, 1916, Irene and Turner Walter Snipes, son of Clarence Snipes and Alice Ann Wright, went before W. P. Nicholson, Judge of Probate for Anderson County, and filed a marriage license. They were married on May 28. Together they had three children—Blair H. Snipes, Buren Turner Snipes, and Clarence Franklin Snipes. When Turner registered for the World War I draft on June 5, 1917, he and Irene lived in Belton. Turner was a tenant farmer on land owned by Irene’s father.

On January 5, 1920, Irene, Turner, and sons Blair and Buren lived in Honea Path. Turner was a farmer on a general farm. Irene and Turner were both able to read and write. They lived two doors from Turner’s parents and his brother John. At the age of 2 years, the unthinkable happened when Irene’s son Clarence died on October 10, 1925 of enterocolitis, an inflammation of the digestive tract according to Wikipedia. He was buried at Bethany Baptist Church Cemetery in Belton on October 10. Within three years, the family was back at the cemetery to bury Irene’s father who died in Anderson on February 5, 1928.

On April 25, 1930, Irene, Turner, Blair, and Buren lived in Honea Path. The census enumerator recorded her as Irene. Turner was a farmer on a general farm. Tragedy struck the Snipes family again in 1937 when Turner died suddenly of a coronary thrombosis, also known as a blood clot of the heart, on August 5 at their home in the Friendship community of Honea Path. Only 45 years old, Turner had lived his entire life in Anderson County and was a “well known farmer in the county.” He was buried at Bethany Baptist Church Cemetery in Belton on August 6.

On April 8, 1940, Irene, Blair, and Buren lived in Honea Path. She owned the house which was classified as a farm and valued at $3,000. Irene was a farmer, working 25 hours a week. Blair, at age 22, was a laborer in a cutting department. Buren, at age 21, was a filling station operator.

At some point by 1960, Irene moved into her brother Brown’s Honea Path home. Her grandson Dan Snipes recalled that she lived upstairs and Brown downstairs. In February 1964, Brown wrote a letter to my grandfather, Sam Holland, telling him that Irene had an apartment in his house and cooked for him. Irene moved to Belton in 1967. Her brother Brown died in March 1968. About that time, Irene’s health starting declining. It worsened the summer of 1969 and she died at Anderson Memorial Hospital on September 21. She was buried at Bethany Church Cemetery beside her husband Turner. She was survived by her sons Blair and Buren; brother Julian and three sisters, Minnie, Maude, and Emma; six grandchildren and one great-granddaughter. She was a member of the First Baptist Church in Honea Path at the time of her death. 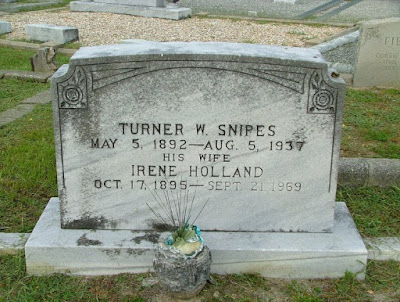