Marian Langford Hobbs, daughter of Nathan Augustus Hobbs Sr. and Mary Elizabeth Lankford, was born in Georgia, most likely Greene County. I have a birthdate for Marian, but unfortunately, there is an issue with the date. Marian’s tombstone records her birthdate as October 29, 1835. The month and date are probably correct, but, if she was born in 1835, she would have been 10 years old when her first child was born. I don’t think so. So, the question here is what year was she born. It took me writing this post to actually see this date issue, even though other researchers have shared information with me in the past where they noted the discrepancy. The first thing I did after realizing this was to take a look back at census records. In the 1850 census, Marian was 25 years old (born about 1825); in 1860, she was 30 years old (born about 1830); in 1870, she was 40 years old (born about 1830); and in 1880, she was 45 years old (born about 1835). So, it’s a best guess scenario. Her brother Minor was born on July 24, 1830 so my guess is she wasn’t born that year since she was born in October. There is a large gap between the birth of her sister Caroline in 1821 and her brother Augustus in 1829, so a good possibility would be 1825, but I can’t confirm that and I haven’t found any birth records that would help.


On August 14, 1850, Marian and John lived in Greshamville (District 145) of Greene County, Georgia. She was enumerated as Maria L. Jenkins, age 25. John was a printer, born in South Carolina. He had real estate valued at $100. With three young children, John (age 4), Louisa (age 2), and Mary (age 5 months), the house would have been a busy one.

By 1860, Marion’s husband John had disappeared so was probably dead, but I have yet to find a record confirming that. I did find several announcements published in The Temperance Banner, a local Penfield newspaper, in the fall of 1852 through at least June 1853, where James L. Tarwater, guardian of John Jenkins (lunatic) was selling the interest of Jenkins’ 160 acres of land in Cherokee county. It’s possible this was Marian’s husband since James L. Tarwater was married to her sister Rebecca so was her brother-in-law. If John was having health issues, I suppose it makes sense that a male family member may have taken guardianship to handle his affairs. But this is something else I have been unable to prove at this point.

On June 4, 1860, the census enumerator found Marion living with her parents in Penfield, Greene County, Georgia. She was enumerated as Marian Jenkins (age 30). Unfortunately, the record does not show her marital status but John was not enumerated with her. Only two of her children were living in the house—Louisa (age 12) and William (age 9). Both were attending school. Marian’s oldest son, John, was living with her brother, Nathan Augustus Hobbs Jr. and his wife Harriet in Penfield. At age 13, John was also attending school. Marian’s daughter Mary (age 10) was living four houses away with Marian’s sister Rebecca Tarwater and her husband James. Marion’s father was the postmaster; her brother Minor was a painter.

One month after the 1860 census was taken, Marian married William Harris McCarty, son of John D. McCarty and Rena Harris, in Greene County on July 8, 1860. William is described by a grandson as having blue eyes, thin, tall, and “straight as a ram rod.”


In April 1862, William enlisted as a private in Company B of the 55th Infantry Regiment of Georgia. William surrendered with his company at Cumberland Gap in Tennessee on September 9, 1863. It’s been said that “after the Civil War ended, he did not like Yankees and would never wear the color blue.” Marian’s brothers Minor Smith Hobbs and Nathan Augustus Hobbs Jr. both served with the Third Georgia Infantry Regiment, Company C, also known as the Dawson Grays, during the Civil War. Nathan (or Augustus, whichever name he went by) died of wounds received during the Battle of Gettysburg in Pennsylvania on July 2, 1863. Minor survived the war and brought the regimental drum back home to Greene County, holding onto it until old age when he gave it to Captain W. A. Wright, a member of the regiment. The drum eventually made its way to the Georgia State Capitol museum. When my sister discovered that piece of information, she contacted the museum that holds the drum and she, Daddy, and myself were given a personal tour of the drum and Greene County regimental flag that was in storage at the time. Marian’s brother Joel served with Medlin’s Independent Company, Georgia Infantry. 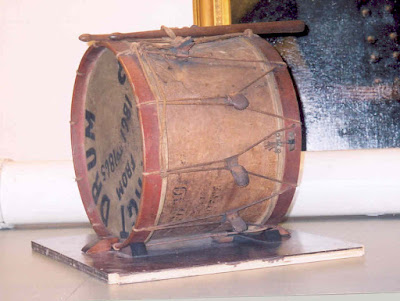 On June 22, 1870, Marian and William lived in Penfield, along with their infant daughter Mattie. The census record noted that Mattie was two months old, born in April. William was a farmer with a personal estate valued at $250. Marion was keeping house. An eight-year-old black girl named Margaret Lankford was living in the home with them.


On June 14, 1880, Marian and William lived in Penfield. Their last name was enumerated as McCarter. William (Bill) was a farmer and Marion keeping house. The only child in the home was a daughter named Gussie, enumerated as a 10-year-old laborer. Her full name was Gussie Annette McCarty. Gussie’s age isn’t correct is this census record. Her tombstone shows her birth year as 1884 and her obituary lists it as 1883. Gussie’s obituary also notes that she was born in Bairdstown, Oglethorpe County, Georgia, so either the family left Penfield for a short time or Gussie was living with someone else. Her living with another family member is entirely possible as we’ve already seen that happen with Marian’s other children.

Marian’s father Nathan died in Penfield on June 4, 1889 at the age of 99. An Atlanta Constitution article that ran on June 7 marking his death noted that he “was one of the most remarkable men ever raised in the county.” Nathan was buried at Penfield Cemetery in Penfield.


Just five months after the death of her father, Marian died in Penfield at the age of 54 on November 1, 1889. She was buried at Penfield Cemetery. Her tombstone reads "None knew them but to love them, none named them but to praise." 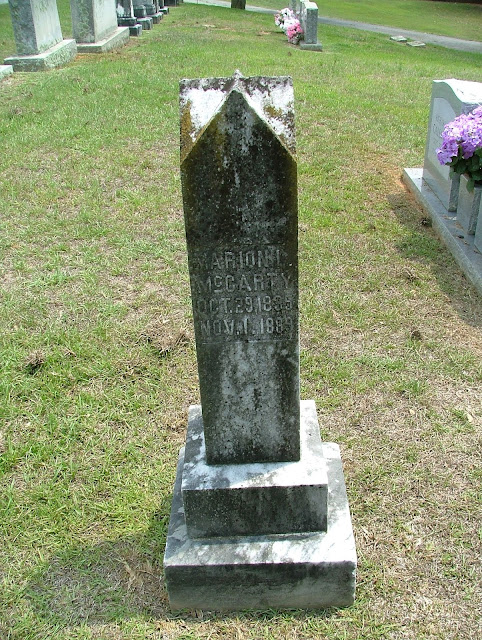 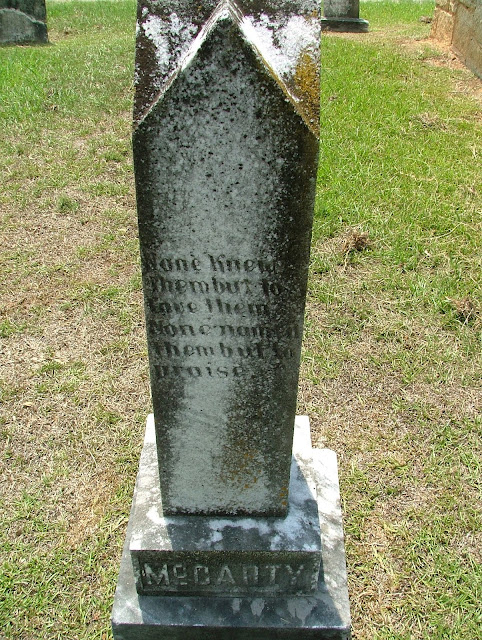 I’m happy I chose to blog about Marian because it took me looking at her life timeline to realize the birth date issue. And because I hadn’t really looked at that before, I was posting incorrect information.