This blog post is the third in a series related to my Mama’s (Fay Lankford) volunteer activities. As long as I can remember, volunteering has been an important part of her life. This series highlights her contributions to serving others and her memories while doing so.

History was made when Atlanta won its bid to host the 1996 Olympic Games and my Mama decided she wanted to be a part of it. With that decision, she joined her fellow Kiwanis Club members and did just that. At the time, Mama was a member of the Shelnutt Golden K Kiwanis Club that met at the Clayton County Senior Center in Jonesboro, Georgia. A member of the Atlanta Olympic Committee came to a Kiwanis meeting to make a call for volunteers. Nine people from their club raised their hands that day—Mama, her
best friend Sue Jester (they did everything together), Elmer Heier, John Letky, his wife Joanne, two other men, a woman, and one other person (she can’t remember their names).

On January 23, 1996, Mama received a letter from the assistant volunteer coordinator informing her that she, along with three others from her Kiwanis group (Elmer, John, and Joanne), had been chosen to be part of the security team. They were assigned to track and field events for both the team trials and the actual Games. They were issued a large notebook of guidelines and a video titled Making Every Moment Count, and were required to attend Security Officer Basic and Intermediate Courses prior to the Games. Mama and her three fellow team members were measured and fitted for a uniform—shirt, pants, shoes, and a hat. The five other team members were assigned to different venues. 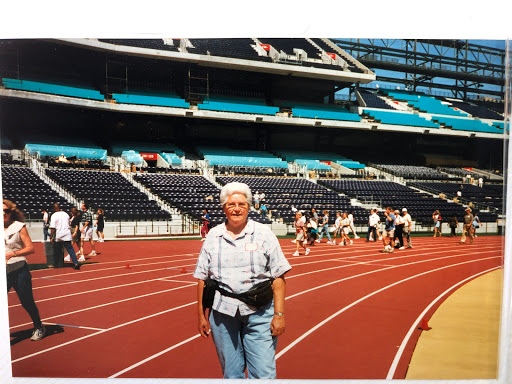 Mama touring the stadium before the Olympics
On May 4, 1996, Mama, Elmer, and several hundred people attended venue orientation at the Olympic Stadium in downtown Atlanta. Once there, they met with management and other team members, and learned about venue operations. The volunteers were given a tour of the stadium, including a walk around the field to become familiar with the stadium. Mama remembers sitting on the pole-vault landing pit during the tour.

Beach volleyball was held at Atlanta Beach in Jonesboro, about 20 miles south of Atlanta. At the time, Atlanta Beach was a recreational facility with a lake for swimming and a sandy beach for playing and picnicking. The Beach was renovated to bring the venue up to speed for the Olympics, including seating for over 12,000. Sue was assigned to drive dignitaries around at the Beach.

Trials were completed by June 28. The Olympic Venue Volunteer Manager sent letters to the volunteers thanking them for their significant contributions thus far and provided details for the Games, including transportation, dress rehearsal tickets, and a carpooling plan.

Mama managed to fit in her yearly vacation that year, driving to Daytona Beach, Florida on July 13. She came home early though, arriving back in Atlanta on Thursday, July 18. She had to be back—opening ceremony was the next day! On July19, Mama was assigned to the street, checking on people as they arrived at the stadium and giving directions as needed. The remaining days she was assigned to the press floor like she had been during trials. Again, she was at the stadium every day from at least 7 pm until midnight. She remembers it being hot. Atlanta in July? Yes, it definitely would have been hot then.

Mama received meal tickets but didn’t use most of them because they were for McDonald’s, not her favorite. Instead, she took a sandwich from home and picked up a drink at the stadium. Coca-Cola was invented in Atlanta so Cokes were everywhere, along with plenty of water. She was given a 15-minute break every day which she spent watching events on the field. Elmer worked on the same floor, but away from the press area. During his breaks, he’d bring Mama candy bars and packs of peanuts.

The Centennial Olympic Park bombing happened on July 27. Normally, Mama and the two men from her team rode to the stadium together. They met at her house and then she drove to a large parking lot behind the United States Penitentiary (a landmark I remember passing daily on my way to work) on what used to be called Confederate Avenue to wait for the Marta buses to pick them up and take them to the stadium. The morning of the 28th, Mama was sitting on the bed getting dressed when she heard reports of the bombing. She and the two men drove to the parking lot as usual to catch the bus, but were put on hold when they arrived. They ended up having to wait two hours while the police swept the stadium before the bus was allowed to leave the parking lot. Although late getting started, Mama was in her assigned position after the police cleared the area.

Mama got a prime assignment for closing ceremonies on August 4—on the field right by the Olympic flagpole. She stood beside the opening where the athletes and entertainment entered the field. Mama remained on the field the entire time. With no real assignment that day, she was able to watch everything as it happened. She remembers the Olympic flag being lowered at the end of the Games and the extinguishing of the flame. Andrew Young was the only famous person she remembers seeing.

After the games ended, Mama received a certificate “in recognition of and appreciation for your contribution to the success of the Games of the XXVI Olympiad” signed by Juan Antonio Samaranch, President of the International Olympic Committee and William “Billy” Porter Payne, President and CEO of the Atlanta Olympic Committee. The Atlanta Olympic Committee held a party for the volunteers at Centennial Olympic Park after the Olympics ended. She remembers they served hot dogs, chips, and drinks. She still has a Swatch watch they gave to the volunteers, although it no longer works. I know the days were tiring for Mama but she loved every minute of it. My husband, sons, and I spent the week in Atlanta during the Olympics. We usually stayed with Mama but that year stayed with Daddy since we knew she wouldn’t be home most of the time. What little we saw of her, she looked tired.