Nathan Augustus Hobbs Jr., son of Nathan Augustus Hobbs Sr. and Mary Elizabeth Lankford, was born in Georgia, probably Greene County, in 1829. He was the fifth child of eight—Robert L. Hobbs, Joel Garner Hobbs, Rebecca L. Hobbs, Caroline B. Hobbs, Nathan Augustus Hobbs Jr., Minor Smith Hobbs, Elizabeth Fanny Hobbs, and Marian Langford Hobbs. He was the brother of my 3rd great-grandmother Caroline B. Hobbs so would be my 3rd great grand uncle. It appears he may have gone by his middle name Augustus, so that’s what I’ll use for this sketch.
Augustus and his family lived in Greene County, Georgia in 1830. They were still living there in 1840. Augustus attended Mercer University in Penfield, Greene County, Georgia during the year 1847. At the time, he was living with his sister Marian Langford Hobbs and her first husband, John Jenkins.
On October 4, 1850, Augustus (as enumerated) lived in District 162 of Greene County, Georgia in the home of Jackson Gobram, a 32-year-old carriage maker from Vermont. In addition to Jackson’s wife Mary and 10-month-old daughter Alice, there were seven young men living in the home, including Augustus. All but one, John W. Daniel, were carriage makers.
Augustus married Harriet Tiller, daughter of Burrell Tiller and Nancy Green, in Oglethorpe County, Georgia on December 30, 1852. It doesn’t appear that he and Harriet had any children together.
On June 5, 1860, Augustus and Harriett lived in Penfield. Augustus was a carriage painter with real estate valued at $2000 and a personal estate of $400. His 13-year-old nephew, John N. C. Jenkins (son of Marian Langford Hobbs and John Jenkins), lived with them. They lived next door to Oliver P. Wilson, my 3rd great grandfather.
When the Civil War began in 1861, Augustus and brothers Joel and Minor were quick to join the cause. Augustus was enlisted as a private in Company C, Third Georgia Volunteer Infantry Regiment (Dawson Grays) by Captain Robert L. McWhorter at Penfield on April 24, 1861. Minor joined the Dawson Grays two days later, April 26. Augustus’ brother Joel joined Medlin’s Independent Company, Georgia Infantry (High Shoals Defenders).
The Dawson Grays arrived in Augusta, Georgia on April 30 and Augustus mustered into service there on May 3, 1861. The company left Augusta via the Georgia Railroad on May 3, on their way to Virginia. In mid-June, the regiment suffered a measles outbreak while in Norfolk, Virginia. In early September 1861, the Third Georgia Regiment was stationed at Portsmouth, Virginia where they were ordered to Hatteras inlet via the Dismal Swamp Canal. They carried cannons with them on the trip, arriving “on the coast just after Hatteras was taken.” The Third Georgia Regiment participated in the Battle of South Mills fought in Camden County, North Carolina on April 19, 1862 so I assume the Dawson Grays were part of that battle. The Dawson Grays fought at the Battle of Malvern Hill that took place in Henrico County, Virginia on July 1, 1862. On August 28, 1862 which was when the Second Battle of Manassas took place, Augustus was admitted to Chimborazo Hospital No. 5 in Richmond, Virginia suffering from debility from fever. Because he was hospitalized in Richmond, does that mean he was not involved in battle at Manassas? Probably not as Manassas is 95 miles from Richmond. Augustus was transferred to Petersburg, Virginia on November 14, 1862. The company muster roll shows that he was absent sick for the period November and December 1862. In early May 1863, the Third Georgia Regiment fought in the Battle of Chancellorsville near Fredericksburg, Virginia. According to the Stone Sentinels website, this was the “fifth deadliest battle of the war” and the battle where the confederates lost Lieutenant General Thomas J. “Stonewall” Jackson. Over the next month and a half, the regiment marched north through Virginia, into Maryland, and finally to Gettysburg, Pennsylvania. It was the Battle of Gettysburg that would prove fatal to Augustus. On July 2, 1863, Augustus died at age 34 from wounds received during that battle—158 years ago today. His body was brought home and laid to rest in the family cemetery in Oglethorpe County, Georgia. 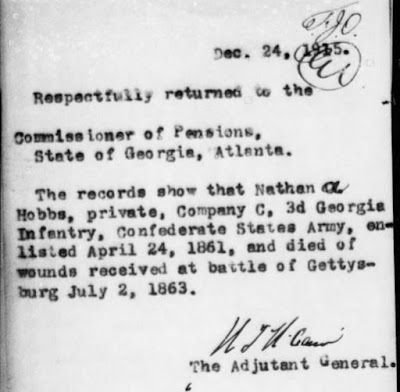