Shortly after Rebecca was born, her family moved to Georgia, settling in Penfield in Greene County.
When Rebecca was 21 years old, she married Jackson C. Phelps on April 1, 1840 in Greene County. I haven’t been able to figure out what happened to Jackson but records show that Rebecca married her second husband, James L. Tarwater, on November 2, 1847 in Greene County. James, born 1814 in Virginia, worked as a cutter in the tailoring business in Penfield.

The pamphlet Mercer at Penfield 1833-1871: Centennial Celebration, published by Mary Callaway Jones on May 27, 1933, has an entry that leads me to believe Rebecca and Jackson may have divorced because it sounds as if he’s still alive in 1852. The entry reads:


46. THE NATHAN HOBBS HOUSE Nathan Hobbs was Postmaster during part of Mercer's Penfield era. One of his daughters was (1) Mrs. Jackson C. Phelps, (2) Mrs. Jas. L. Tarwater. In 1852 Jackson C. Phelps resided on the corner of Davis and Marshall streets. J. L. Tarwater's home was between No. 17 and No. 18. Another daughter was Mrs. Jenkins.

If you can tell me otherwise, I’d love to hear from you.

On October 29, 1850, Rebecca and James lived in Salem, Greene County, Georgia. The census record shows that she was born in North Carolina. James was a tailor with real estate valued at $500. On October 7, 1854, after a church conference, Rebecca received a letter of admission from Baird’s Baptist Church in Oglethorpe County, Georgia and James received a letter of admission for Penfield Baptist Church. He had previously been granted a letter of dismission. In December 1854, Rebecca was awarded a $5 premium for best wove quilt or coverlet in the Southern Domestic Manufacturers category by the Southern Central Agricultural Society at the Ninth Annual Fair held in Augusta, Georgia. On March 12, 1859, Rebecca and James were admonished by the church for dancing, something people do all the time today, and often in a church. An entry in the Penfield Baptist Church minutes held in the Special Collections section of the Mercer University Library reads:


Church met in conference. Rules of Decorum and minutes of the last meeting were read. … The committee appointed at the last conference to inquire into the reports relative to dancing, made report. Bro. Tarwater made a statement to the church, in which he confessed that himself and Sister Tarwater had been engaged in dancing, acknowledged the impropriety of their conduct, and begged the forgiveness of the Church, pledging themselves not again to engage in such amusement. On motion the forgiveness of the Church was extended to Br. and Siter [sic] Tarwater. 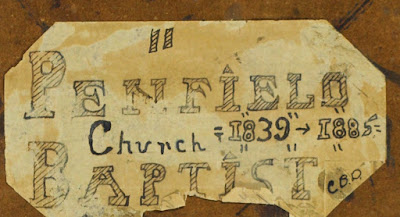 The 1860s was a busy time for Rebecca and her family. On June 4, 1860, Rebecca and James lived in Penfield. James was still working as a tailor. His real estate was now valued at $600 and personal estate $750. Rebecca’s 10-year-old niece Mary Jenkins, daughter of her sister Marian, was living in the home. There was also a 23-year-old white male named Homer Neeson in the home with the Tarwaters. Homer was a medical student and had a personal estate valued at $950. He was probably attending Mercer University. Rebecca’s brother Nathan, who served with the Dawson Grays, Company C, Third Georgia Infantry Army of Northern Virginia from Greene County during the Civil War, was killed in Gettysburg, Pennsylvania on July 2, 1863. In July 1864, a year after Nathan’s death, Rebecca’s husband James enlisted at Greensboro, Greene County, Georgia with Capt. Wards Company C of the First Georgia Militia or Mell’s Regiment. James was sent home due to illness after serving only nine months. He was not with his command at the surrender at Appomattox Court House. On May 4, 1867, letters of dismission were granted to both Rebecca and James from the Penfield Baptist Church.

On August 8, 1870, Rebecca, James, and Mary lived in Greensboro. James continued to work as a tailor and his personal estate was again at $500. There was a 16-year-old black male named William Langston who worked as a day laborer living in the home. William could neither read nor write. In 1875, Rebecca spent three weeks tending to her sick husband.

On June 14, 1880, Rebecca and James lived in Penfield. James still worked as a tailor and Rebecca was now enumerated as a farmer. The birthplace for both was recorded as Georgia, not North Carolina for Rebecca or Virginia for James. Neither Rebecca or James were able to read or write. There was a 12-year-old black male servant named Warren living in the home. They lived next door to the Ligon McWhorter family, a prominent family in Greene County. During the 1880s, in addition to working as a tailor, James sold churns, washing machines, and sewing machines. In 1886, Rebecca had a severe illness of some sort—severe enough it was noted that she was recovering in the Georgia Home Journal on August 20.

Rebecca’s father Nathan died in Penfield at the age of 99 on June 4, 1889. An Atlanta Constitution article that ran on June 7 marking his death noted that he “was one of the most remarkable men ever raised in the county.” Nathan was buried at Penfield Cemetery in Penfield.

After 45 years of marriage to Rebecca, James died on July 12, 1893 at the age of 79 in Penfield. He too was buried at Penfield Cemetery. At the time, Rebecca suffered from rheumatism, heart trouble, and shortness of breath. Years later when filing for a widow’s pension, Rebecca stated that James left her without any property. With no income, Rebecca had to depend on the help of charity and the Penfield Baptist Church to survive. She lived in poverty. During the years 1899 and 1900, her support cost $60 or $70 per year of which she contributed nothing.

On June 16, 1900, a widowed Rebecca lived alone in Penfield. This census record confirms that Rebecca never had children of her own. Her next-door neighbors were Joseph and Minnie G. Boswell. In 1948, the Minnie G. Boswell Hospital was built in Greensboro. In 1901, Rebecca filed for an indigent widow’s pension in Greene County on the grounds of age and poverty, conditions she had suffered from for at least 10 years. Records show she was approved for pension at least during the years 1901, 1903, and 1904–1907.

Rebecca signed her last will and testament on September 10, 1908.


It was published by John S. Callaway on November 19, 1909. Her niece, Mary Elizabeth (Jenkins) Moore, who had been named as executrix, acknowledged on December 6, 1909 that she would execute Rebecca’s will. I haven’t found a death record for Rebecca but this leads me to believe she died about November 1909 at about 90 years of age. Rebecca was buried at Penfield Cemetery in Penfield.


Although Rebecca had filed affidavits that her husband left her with no property and that she had no income, she bequeathed her 10-acre lot in Penfield known as the Tarwater lot, as well as all of her household and kitchen furniture to “her beloved niece Mary.”