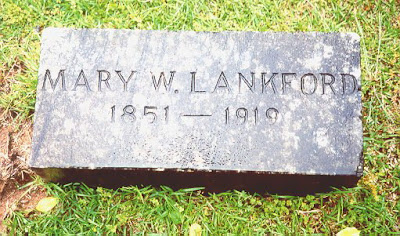 On June 5, 1860, 10 year old Mary and her family lived in Penfield, Greene County, Georgia. Her father was a wagoner with real estate valued at $300. They lived next door to Nathan Augustus Hobbs Jr. and his wife Harriet (Tiller). Nathan was the son of Nathan Augustus Hobbs Sr. and Mary Elizabeth Lankford. His sister was Caroline B. Hobbs, my 3rd great-grandmother. Three years after this census was taken, Nathan would be gone—killed in Gettysburg, Adams County, Pennsylvania on July 2, 1863 while serving with Company C of the Georgia Third Infantry Regiment during the Civil War. Eight years after the 1860 census was taken, Mary Ann Lankford married into the Lankford family, becoming the wife of James C. Lankford, son of Caroline (Hobbs) and James Meriweather Lankford on January 5, 1868 in Greene County, Georgia. The marriage ceremony was performed by Lucius C. Broome, Justice of the Peace. Together they had 10 children—Homer J. Lankford, Alice Beman Lankford, Julia Lee Lankford, Jessica Corinne Lankford, James Vason Lankford, Mary Corrine Lankford, Nathan Lawrence Lankford, Vincent Thomas Langford Sr., Oliver Wilson Lankford, and Lillie Della Lankford. Mary and James Lankford were pioneer citizens of Greene County.

On June 8, 1870, Mary and James lived in Penfield. Mary was keeping house and James was a butcher. James’ sister Emma and her husband James Wilson, also a butcher, lived four doors away. Sometime before 1880, Emma died and was buried at Penfield Cemetery in Penfield.
On June 10, 1880, Mary, James, and their children—Homer, Alice, Julia, and Jessie—lived in Falling Creek, Oglethorpe County, Georgia, next door to James’ parents, James and Caroline (Hobbs) Lankford. James was a blacksmith. Mary was enumerated as Mary Ann Lankford. 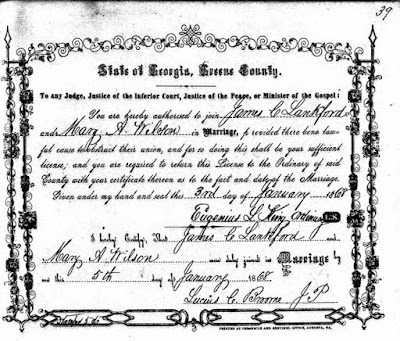 On June 1, 1900, Mary and her family lived in Woodville, Greene County, Georgia. She and James had celebrated 31 years of marriage. James’ nephew, Julius C. Wilson, son of Emma S. (Lankford) Wilson, lived next door with his wife Elvie and son Julius. James was a farmer and their sons James, Nathan, and Vincent were farm laborers. I assume they were helping their father on the farm. Charles C. Davison, a member of the prominent Davison family of Greene County, lived two doors away with his family.

Mary’s husband James died in Greene County on January 21, 1908. He was buried at Penfield Cemetery. His obituary reads “Mr. J. C. Lankford. At 1 o’clock Tuesday morning, Jan. 21, 1908, Mr. J. C. Lankford’s spirit passed to the great beyond, in the sixtieth year of his age. Mr. Lankford was a busy man, with boundlis energy but never too busy with his own affairs to lend a helping hand to those in distress, and need of help. He was a good neighbor, a faithful and enthusiastic friend, and a man who will be missed in the community. He leaves a large family, a wife, five sons, and five daughters and three sisters, who with a host of other near relatives and friends deeply mourn his untimely departure from our midst. The funeral was conducted by Rev. J. S. Callaway and the interment was in our city cemetery. E.B.R.”

On April 15, 1910, a widowed Mary lived in Penfield. The census enumerator recorded her as the mother of 10 children, all of which were living. Her 20 year old son Oliver, a blacksmith, lived with her. Two houses away was James England George and his wife Gussie (McCarty) George, William McCarty (Gussie’s father and widowed husband of Marian Langford Hobbs of Penfield), and Hayden George (brother of James). Hayden married Mary’s daughter Lillie Della Lankford in September that same year.

Mary died of Bright’s disease in Penfield on March 26, 1919. She was buried on March 27 beside her husband at Penfield Cemetery. Mary’s death certificate listed her birth year as 1841 vs. 1851. If you do the math, that would have made Mary 78 years old—not 68 years, 4 months, and 16 days as recorded on the certificate. Her tombstone is marked 1851. Mary’s death certificate also listed her middle name as Amanda. The only other time I’ve seen a middle name listed for Mary vs. her initial “A” was the 1880 census where she was listed as Mary Ann Lankford. So is her middle name Ann or Amanda? Hard to say. Seaborn Brice Barnhart, her son-in-law, was the informant on her death certificate.

Mary’s daughter Jessica or “Jessie” was the administratrix of the estate. Mary left a “large estate of real and personal property, worth the sum of five hundred ($500) dollars.” Jessie applied to sell the land in the Village of Penfield, Greene County, Georgia on June 9, 1919. The petition showed that Mary’s estate consisted of a tract of land in the Village of Penfield, on the northeast corner of Evans Gresham’s lot, bounded north by Main Street, East by thirty feet street and lot of Mrs. Barnhart, south and west by Evans Gresham lot, formerly owned by Penfield Hosiery Mills. Jessie sold the land for $600 to pay her mother’s debts and then distributed the remaining money among her siblings. Disbursements were made as follows: