On June 25, 1900, George and his family lived in the Washington Township of Westmoreland County, Pennsylvania. At age 14, George was in school and able to read and write.

When George was just 22 years old, his 18 year old sister Edith, blind as the result of measles, died of typhoid fever at Mercy Hospital on October 24, 1906. She was buried at Riverview Cemetery in Apollo, Armstrong County, Pennsylvania.

On April 26, 1910, the family lived in Paulton, Washington Township, Westmoreland County, Pennsylvania. A neighbor two doors away was John A. Stewart. Mr. Stewart was also a neighbor in 1900 so they must be living in the same house. George, his father, and brother Ben all worked in a sheet mill. Two years after this census was taken, George’s father died on March 9, 1912 in Westmoreland County. He was buried at Riverview Cemetery in Apollo. The family was probably just getting out of their mourning period when John’s 17 year old sister Helen died in Paulton on March 18, 1913 after suffering with endocarditis (an inflammation of the inner layer of the heart) for two years. She was buried on March 20 in the family plot at Apollo’s Riverview Cemetery, sharing a tombstone with her parents and sister Edith.

George registered for the World War I draft in Vandergrift, Westmoreland County, Pennsylvania on September 12, 1918. He listed his mother as the nearest relative. George and his mother were living together at Box 30 in Apollo. George listed his occupation as a “catcher” with the American Sheet and Tin Plate Company in Vandergrift. He was tall and slender, had dark blue eyes, and dark brown hair.

On January 26, 1920, 34 year old George lived with his 60 year old widowed mother in the North Washington District of Washington Township in a home located on Greensburg – Apollo Road. His adult siblings were also part of the household—Ben (age 37), Bertha (age 22), and John (age 18). All were able to read and write. George, Ben, and John all worked in a steel mill with John being a “ruffer.”

On April 14, 1930, George and Verda lived in Paulton, Washington Township, Westmoreland County, Pennsylvania. Verda’s sister May Hilty, age 42, lived with them. George owned their home and they had a radio. He was a ruffer in a steel mill.

On April 8, 1940, George and Verda lived in the Washington Township, the same house they lived in in 1930—the neighbors were the same and the census enumerator recorded that it was the same house as in 1935. May still lived with them. George worked a 40 hour week as a laborer at Carnegie Illinois Steel Corporation. George registered for the World War II draft in 1942. His mailing address was R.D.1 (Blairton), Westmoreland, Pennsylvania. He listed his mother, living in Paulton, as the person who would always know his address. He worked for the Carnegie Illinois Steel Corporation. George’s mother, Amanda Larimer Horne Smith, died on January 11, 1943 following a stroke in Washington, Westmoreland County, Pennsylvania. She was buried at Riverview Cemetery in Apollo with her husband and daughters Helen and Edith.

George retired in the mid-1950s after working in the Vandergrift plant of U.S. Steel Corporation for 43 years as a mill worker. On December 15, 1957, his brother Ben died from a heart attack at the Elks Retirement Home in Bedford, Bedford County, Virginia where he had been living. Ben was buried in the Elks National Cemetery in Bedford, a section of Oakwood Cemetery designated as the burial place for residents of the Elks National Home. George died of a heart attack at home in the Washington Township on April 24, 1959. He was buried on April 27 with the Hilty family at Riverview Cemetery in Apollo. 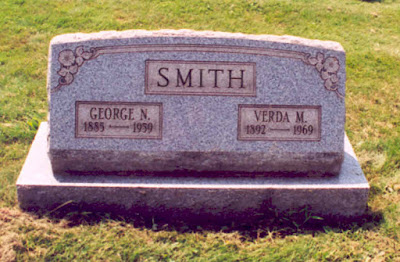 George lived in Blairton for 33 years and was an active member of Apollo Presbyterian Church for 57 years.
Posted by Denise at 8:58 PM