In May 2018, I blogged about a photo album that once belonged to my husband’s grandmother, Bertha Edna Smith Athya and is now in the possession of my husband and I. Bertha also left a box of photos behind, many of them from her early years. Most of the photos are the size of a baseball card, measuring 2½ inches by 3½ inches.

Bertha was born in Paulton, Pennsylvania but the Smith family has roots in Apollo. Bertha and her husband George Durie Athya lived in Apollo after their marriage in Pittsburgh on June 14, 1924, 96 years ago this weekend.

The photo below is one of the photos from that box. Bertha herself labeled the photo as the “Ladies from First Presbyterian Church, Apollo, Pa.” Bertha is not in the photo but her mother, Amanda Larimer Horne Smith is. She’s the woman holding the child, whom I believe is one of her grandchildren. My best guess for the child is that it’s either Stanley Stewart Smith, born 1919 in Apollo, or his sister Alma Margaret Smith, born 1922 in Apollo. Both are the children of Amanda’s son Howard Stanley Smith and his wife Myrtle Mary Stewart Smith, whom I believe is the woman with a necklace, standing in the center, looking down. I also believe that Myrtle’s mother, Mary Bell Johnston Stewart, is the woman standing between Myrtle and Amanda (center with dark hair and glasses). These are just my best guesses so if you can tell me otherwise, or identify anyone else, I’d love to hear from you. 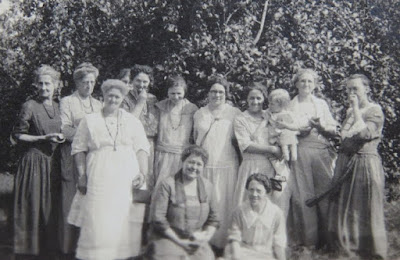 On a side note, it wasn’t until I enlarged the photo (remember it’s the size of a baseball card) that I realized several of the ladies are either eating or holding an apple. That's probably an apple tree behind them.
Posted by Denise at 7:26 PM