Elsie Augusta Smith, daughter of Erastus C. Smith and Jane Rachel Anderson, was born in Apollo, Armstrong County, Pennsylvania on September 27, 1869. She was the oldest of four children—Elsie Augusta Smith, Mary Jane Smith, Florence G. Smith, and Barton Richard Smith. She would be the first cousin 2x removed of my husband Charles Murphy. Their nearest common relatives are John Thompson Smith and Jane Gordon, his 2nd great grandparents. I’m not sure if she went by Elsie, Augusta, or Gussie—I see them all in the records—but for this sketch, I’ll use Elsie.

Elsie was baptized on May 11, 1870 at the First Presbyterian Church in Apollo. She was listed as Elsie Augustus (Smith) in the Register of Baptisms.

On June 24, 1870, the Smith family lived in the Kellys Station community of Apollo. Elsie’s father was a painter, her mother was keeping house. She was enumerated as Elsie A. Smith, age 8/12, born in September. Elsie’s maternal grandfather, Samuel Anderson, a 67-year-old laborer, lived with the family. The census enumerator did not record any real or personal estate information for Elsie’s father Erastus. Her grandfather Samuel was enumerated as having real estate valued at $1500 and a personal estate valued at $300.

On June 21, 1880, the Smith family still lived in Apollo. Elsie’s father, now 36 years old, still painted houses, but was noted as having been unemployed for six months that year. Jane, her mother, age 37, was keeping house. Elsie, age 10, was at home, along with sister Mary, age 6, sister Florence, age 4, and brother Frank, age 1. When Elsie was 16, her father Erastus died in Apollo on April 13, 1886 at the age of 43. His cause of death was from erysipelas, a superficial infection of the skin typically involving the lymphatic system. He was buried at Riverview Cemetery in Apollo.

Elsie married James Elmer Wible, son of Robert Wible and Sarah Bowsed, in Mahoning, Ohio on November 18, 1896. They had one child, a son they named Harry Anderson Wible, born in Apollo on January 31, 1897.

On June 12, 1900, Elsie, enumerated as Gussie, and her 3-year-old son Harry, lived with her mother and brother Barton in Apollo. The census record shows Elsie had one child, who as noted above, was living in the home. Her birth was shown as September 1870. Her brother Barton, now age 20, was an opener in a steel mill. It appears that no one else in the home was working. The census enumerator noted that she had been married four years, but there was no sign of her husband on the census record. I’ve looked but have yet to find him in the 1900 census. I did find James listed in the 1902 Pittsburgh City Directory; however, the directory didn’t list spouses. At the time, James lived on Brushton Avenue with his brother George G. Wible.

At the age of 37 and a half years old, Elsie died on March 30, 1907 in Pittsburgh, Allegheny County, Pennsylvania. She had been diagnosed a year earlier with pulmonary tuberculosis when she succumbed to the illness. Elsie was buried at Prospect Cemetery in Apollo. At the time of her death, she lived at 7825 Bennett Street in Pittsburgh, the same address James was listed in in the 1904 and 1906 Pittsburgh City Directories. Elsie shares a tombstone at the cemetery with her sister Mary who died of heart disease in Apollo on January 12, 1908, less than a year after Elsie’s death. The Apollo Sentinel reported Mary’s death on January 17, 1908:

Death of Mary Jane Smith—after a lingering illness Miss Mary Jane Smith died at the home of her mother, Mrs. J. R. Smith, on North Sixth Street, on Sunday, January 12th 1908, aged 33 years, 9 months and 8 days. The deceased was a Presbyterian by faith and was well liked by all who knew her. She is survived by a mother and a brother, Bart Smith, and a sister, Florence Smith. Funeral services were held Wednesday. Interment was made at the Prospect cemetery. 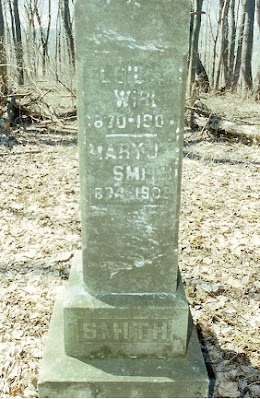 The daughters in this Smith family would not be allowed to grow old. In just three years, all three young women were gone. Like Else, her sister Florence also contracted pulmonary tuberculosis and died on December 7, 1909. Florence was buried at Prospect Cemetery with her sisters Elsie and Mary. The Apollo Sentinel reported her death on December 10, 1909:

Florence Smith, daughter of Mrs. Jane Smith, died at her home on North Sixth Street on Tuesday, December 7th, aged 33 years. Death was caused by tuberculosis. She was a member of the Presbyterian Church. Funeral services were held at her late home Thursday afternoon. Rev. Leon Stewart preached the funeral services. Interment in the Prospect Cemetery.

James lived with his brother George G. Wible in Ward 3 of Pittsburgh in 1910. Both he and George were building contractors. He died of pneumonia on January 8, 1912 in Pittsburgh. Their son Harry was left an orphan at age 14.