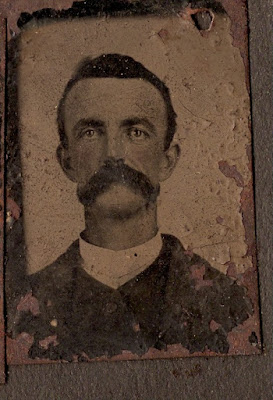 William Harris McCarty, son of John McCarty and Rena Harris, was born in Jackson County, Georgia on April 1, 1838. There were at least nine children in William’s family—Nancy A. E. McCarty, John McCarty, William Harris McCarty, Jesse McCarty, Mary A. Luvina McCarty, Elias McCarty, Bradley Walker McCarty, Demaris McCarty, and Marion J. McCarty. He is the husband of my 3rd great grand aunt, Marian Langford Hobbs Jenkins McCarty. We have no common relative. He apparently went by Bill but for the purpose of this sketch, I’ll use William.

On October 1, 1850, William and his family lived in Subdivision no. 45 of Jackson County, Georgia. His father John worked as a laborer.

I looked all over the place for William in the 1860 census and believe I finally found him on June 6, 1860, living with Terrell Benton and his family in Schull Shoals, Greene County, Georgia. The age is right—since William was born in 1838, he would have been 22 years old in 1860, which is how old this William was. William worked as a pitcher. I tried, but didn’t find, a definition for this occupation but believe it has something to do with pitching hay. Mr. Benton was an overseer which meant he worked on a farm. Makes sense to me. This record puts William in Greene County where he would meet his future wife, Marian Langford Hobbs Jenkins.

William and Marian, daughter of Nathan Augustus Hobbs Sr. and Mary Elizabeth Lankford, were married in Greene County, Georgia on July 8, 1860. Marian, a widow, had previously been married to John Jenkins.

William and Marian were still newlyweds when the Civil War broke out in 1861. On May 5, 1862, at the age of 26, William enlisted as a private at Crawfordsville, Georgia in Captain James M. Griffin's Company, 55th Regiment Georgia Infantry, Company B for the period of three years or the war. He mustered in at Camp Stevens on May 13, 1862. William remained with his company until September 9, 1863 when they were surrendered at Cumberland Gap, Tennessee. By April 30, 1864, William was serving in Company A. On June 22, 1864, he was detached as a butcher by order of General Winder. On August 26, 1864, he was issued new clothing for the third quarter. After the Civil War ended, it was said he did not like Yankees and would never wear the color blue.

About April 1870, William and Marian had their first child, a daughter they named Mattie. On June 22, 1870, William, Marian, Mattie, and an eight-year-old black female named Margaret Lankford lived in Penfield. William was a farmer with a personal estate valued at $250. Marian was keeping house. On October 11, 1874, their second daughter, Gussie Annette McCarty, was born in Bairdstown, Oglethorpe County, Georgia.

On June 14, 1880, William, Marian, and Gussie lived in Penfield, Greene County, Georgia. He was enumerated as Bill McCarter, working as a farmer. Marian was keeping house while 10-year-old Gussie worked as a laborer, presumably helping her father on the farm. His father John died at the age of 67 in November 1880 in Oglethorpe County. William was apparently well thought of in Penfield. On September 1, 1881, The Greensboro Herald published a short item in a section called “Penfield Dots” that read:

Penfield Dots.—Wm. McCarty says he has a cow that, with good attention, will give four gallons of milk per day. We believe it, for Bill is a good judge of that kind of stock.

Marian took ill in 1882. Another short item was published in the Penfield Dots section of The Greensboro Herald on March 9, 1882 that read:

Penfield Dots. By Senior. We regret to learn that Mrs. W. H. McCarty is quite sick.

She survived whatever illness she had in 1882 and lived another seven years. After 29 years of marriage to William, Marian died in Penfield on November 1, 1889. She was buried at Penfield Cemetery there in Penfield.

On June 12, 1900, a widowed William, his daughter Gussie, son-in-law James E. George, and his granddaughter Willie Marion George (enumerated as a grandson named William M. George and labeled as a female) lived in the Branch District of Greene County, Georgia. At age 63, William still farmed. James, who had been married to Gussie for two years, was also a farmer. All three adults were able to read and write.

William filed an indigent pension application in Greene County on September 14, 1903. Joseph Boswell, a friend for 40 years and member of the same regiment, acted as a witness on William’s application. In his statement, Joseph said he lived a mile from William and knew that he had no property, effects or income, and that he didn't have as much as $5 at any time during the period 1896 to 1902. He further stated that William had no occupation because he was very feeble from old age and physical weakness. During the years 1898 to 1902, Joseph said that William did a little work but was otherwise supported by the help of friends almost altogether. During that period, William managed to bring in an income not exceeding $10 a year. Finally, Joseph said that William was a delicate man naturally and added to this the infirmities of age rendered him unable to support himself. On September 14, 1903, Dr. J. Fielding Wilson certified that William was unable to earn a living due to cardiac trouble which physically disabled him from doing daily labor.

On April 15, 1910, the tables had turned and William now lived with Gussie and James on Main Street in Penfield. As he had 10 years earlier, William still farmed on a general farm but James now worked as a sawyer in a saw mill. William had four grandchildren living in the home to keep him company—Marion, Raleigh, Mary Lou, and Otis George. James’ brother Hayden Edgar George also lived in the home. Hayden worked as an agent for Gloria Light. They all lived next door to James’ sister Julia Cleo George Clark and her husband Augustus. Living next door to Julia was Mary Lankford, my 2nd great grandmother, along with her son Oliver and daughter Della. Mary was the wife of James C. Lankford, nephew of William’s wife Marian.

On January 8, 1920, William continued to live with Gussie and James but they had moved to Bowling Green Road in the Bowling Greene District of Stephens, Oglethorpe County, Georgia. At age 77, William had finally given up farming. James was now an operator in an auto garage. Grandson Raleigh contributed to the family by working as a farmer on a general farm. Mary Lou and Otis (enumerated as James O. George) were both in school. William had been blessed with one more grandchild since the last census was taken, a boy named Guy. Guy would later describe his grandfather as having blue eyes, and being thin, tall and straight as a ram rod.

William died of dysentery at the age of 86 in Penfield on June 20, 1923. Upon his death, James filed an application for pension due to a deceased pensioner to pay $105.30 for William’s funeral and final medical expenses which consisted of:

$2.30 for underwear, one shirt, hose, collar, and buttons from A. J. Boswell General Merchandise in Penfield

The Pension Office approved and ordered paid $100.00. William was buried beside Marian at Penfield Cemetery. 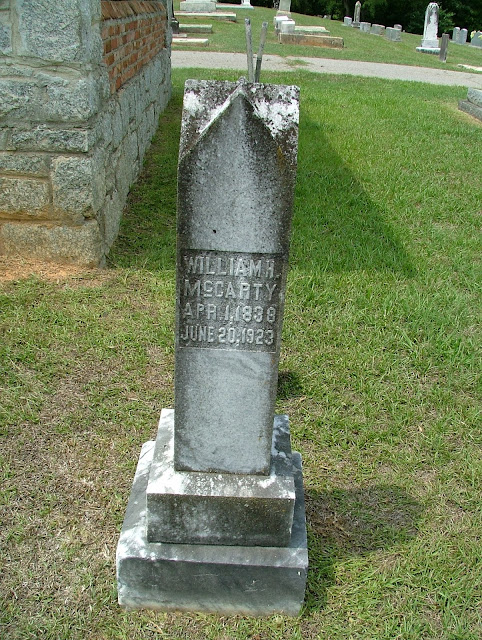