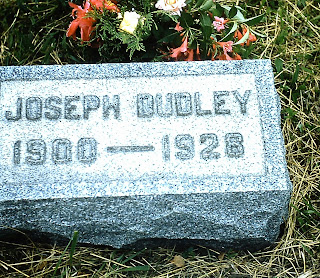 Joseph Dudley Jr., son of Joseph Dudley Sr. and Martha West, was born March 20, 1900 in Pennsylvania. He was the youngest child of eight—John W. Dudley, Harriet Dudley, Mary Dudley, Thomas Dudley, Annie Dudley, James Dudley, Steven William Dudley, and Joseph Dudley Jr. His parents had a ninth child according to 1900 census records but nothing is known about this child.

Joseph was neither mine nor my husband’s ancestor. Instead, he was my husband’s Aunt Jean Dudley Murphy’s uncle. Aunt Jean, who had previously shared historical family information with me, recently called and asked me to do additional research on her family. When I pulled the notebook that held that information out for a refresher, I ran across notes and articles related to Joseph’s story. After doing a little more research on Joseph, I thought I’d share his tragic story with 52 Ancestors.

On June 4, 1900, Joseph’s family lived in the Hastings Borough of Cambria County, Pennsylvania. The census enumerator recorded Joseph’s birth as March 1899 rather than 1900. His age was recorded as 2/12 (or two months). Joseph’s parents were both born in England, with his father immigrating to America in 1882 and his mother in 1883. His father was a coal miner. The census record shows that his mother had nine children, six of which were living. This piece of information has me confused. The only children not listed in the census were John W., Harriet, and what would be the unknown ninth child. I don’t know anything about John but do know Harriet went on to live until 1965. Perhaps it was another error by the enumerator but I really have no way of knowing that at this point.

On April 21, 1910, 10 year old Joseph lived with his family in the Summerhill Township of Cambria County, Pennsylvania. His sister Harriet lived next door with her husband, William H. Booth, and their children. Joseph’s father and brothers Thomas, James, and Steven were all coal miners.

Joseph registered for the World War I draft sometime during the years 1917 to 1918. He recorded his permanent address as Beaverdale, Cambria County, Pennsylvania and his occupation as mule driver for the Beaver Run Coal Company. He listed his father, who also lived in Beaverdale, as his nearest relative. Joseph was of medium height and build; he had brown eyes and black hair.

On January 21, 1920, Joseph was the only child living with his parents in the Summerhill Township, South District of Cambria County, Pennsylvania. At age 19, he was still single and able to read and write. Following in his father’s footsteps, Joseph was now a miner in the coal mine.

Joseph must not have enjoyed being a coal miner, although he continued to work at the mine. In 1924, he was a laborer. By 1926, he was a tipple boss, supervising the miners loading coal into the railroad cars. By 1928, he was a store manager.

October 8, 1928 should have been a normal workday at the Cortright-Cornog Collieries Company mines near Lodgeville and Ocean Mines in Harrison County, West Virginia. Instead, a tragic event that morning changed the lives of the Dudley family forever. Joseph, the first person entering the pumping station that morning, was rocked by an explosion when he turned on the electric switch. Apparently, someone had planted a bomb made out of dynamite that would go off when the switch was turned on. James, who was Joseph’s brother and Aunt Jean’s father, was the mine superintendent at the time and usually the first person to arrive, believed the bomb was placed by a disgruntled worker and meant for him. The explosion could be felt for miles, including by members of Joseph’s own family. His mother was drinking coffee at the time of the explosion and the cup was knocked from her hand. Joseph, whose legs were blown off by the explosion, was rushed to St. Mary’s Hospital in Clarksburg. The injuries were too severe to overcome and Joseph died the next morning. His death was ruled a homicide by explosion of a bomb and shock by Dr. W. M. Davis, the same physician that signed the birth certificates for his three daughters. Dr. Davis certified that he attended to Joseph from October 8 to October 9, 1928. Joseph was buried at the Bridgeport Masonic Cemetery on October 13.


West Virginia State Police and county deputies arrested two men for the crime. Aunt Jean recalled that only one person was convicted and served time in the West Virginia Penitentiary.

Joseph’s wife Ruth later remarried and died at the age of 101 in September 2000.