I hesitate to list a birthdate for Amanda because I have yet to determine what it is. I say that because records bounce all over the place. The table below lists the various records I’ve found that one would use to determine someone’s birthdate. She’s not listed in the 1850 census record so I want to say “about 1851.” What do you think?

On June 25, 1860, Amanda lived with her family in the Fourth Regiment of Anderson. She was 8 years old and enumerated as Eliza A. Holland. Her older sister Nancy and her husband Marcus Hall lived next door.

Amanda married John E. Dove, son of Robert Henderson Dove and Cynthia Saylors, most likely in the late 1860s. They had a 10 month old son when the census enumerator visited on July 23, 1870. Together they had five children—John William, Cornelia Jane, Sallie M., Elizabeth A., and Carrie Ann Dove. I assume they were married in Anderson but have yet to find a marriage record.

On July 23, 1870, Amanda and John lived in the Martin Township of Anderson. Amanda was 19 years old, John 22 years old. John’s parents lived next door to them. She was enumerated as Manda and her occupation was “keeping house.” Amanda and John had one child at the time, a 10 month old son they named John. Amanda’s brother-in-law, W. P. Dove, lived with them. Both John and his brother were farm laborers.

Elizabeth (Majors) Holland, Amanda’s mother, died on February 27, 1876. John Holland, Amanda’s father, died on September 9, 1877. It’s believed they were both buried in the Math Cobb Cemetery across the railroad from the old home place on Pea Creek. John had acquired quite a bit of land and upon his death, the land was divided among his children. Amanda’s brother Leroy built a house on his portion of the land.

I’ve been unable to find Amanda and John in 1880 census records. However, on June 10, 1880 her 10 year old son John was living alone with his paternal grandparents, Henderson and Cynthia Dove, in the Broadway Township of Anderson County. Where were Amanda and John? I’ve heard that John deserted the family and eventually started a second family but I haven’t researched that myself. Perhaps the destruction of their marriage had already begun.

On June 14, 1900, Amanda lived in Hart County, Georgia with daughter Sallie and son-in-law Boone Bowers. According to the census record, Amanda had six children, five of which were living. Amanda is able to read and write. She was enumerated as 55 years old and widowed. The census enumerator recorded her birthdate as January 1845. I don’t know what was going on with this census record. John didn’t die until October 10, 1926 so Amanda shouldn’t have been enumerated as widowed. The year 1845 is way off from other records so I can’t see that as being correct either.
By June 21, 1900, daughter Carrie Ann has married George Washington Starrett and moved to Madison County, Georgia.

I have looked high and low in the 1910 census records but haven’t been able to locate Amanda. Daughters Sallie and Janie lived in Whitfield County, Georgia and son John lived in Franklin County, Georgia. By April 9, 1910, daughter Carrie and son-in-law George have moved to Morris County, Texas. On May 11, Elizabeth and Thomas lived in Polk County, Arkansas. But I can’t find Amanda anywhere.


On January 9, 1920, Amanda lived with her son, John in the Manleys District of Royston City, Franklin County, Georgia. She was enumerated as divorced and 68 years old. Daughter Elizabeth and her husband Thomas have moved to Cass County, Texas. Amanda died later that year on November 5, 1920 at the home of her son John W. Dove and his wife Peg in Royston, Franklin County, Georgia. She was buried in an unmarked grave at Redwine Cemetery in Royston.

On March 3, the Digital Library of Georgia released the North Georgia Historic Newspapers Archive covering the years 1850–1922. I have many ancestors from North Georgia so of course I spent the evening of March 3 searching my family names. I quickly found a news article written by Amanda’s granddaughter, Ursula G. Bowers Ledford, after Amanda’s death. Ursula, or Lula (I’ve also seen her called Sula), was the daughter of Sallie M. Dove, Amanda’s daughter. 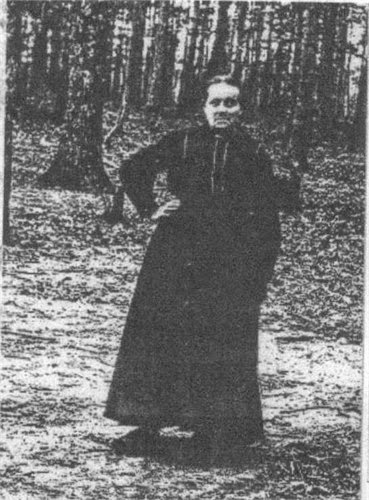 North Georgia Citizen, November 18, 1920
In Memoriam. On November 5th, 1920, the white-robed angel entered the home of Mr. J. W. Dove and took away the sweet life of his mother, Mrs. A. E. Dove. She had been sick about a year. She was helpless for about six months.

She was my dear grandmother. Oh! how sad the parting from you, dear Grandmother.

She lived a Christian life and bore her troubles without complaining. She was loved and respected by all who knew her.

She spent the most of her life in Georgia. She was seventy-nine years of age. She leaves to mourn her loss five children and a host of grandchildren and great-grandchildren. Her children surviving her are Mrs. Boon Bowers and Mrs. E. J. Holland, of Whitfield county; Mrs. T. R. Allen and Mrs. Carrie Starrett, of Texas, and one son, Mr. J. W. Dove.

She had many trials and temptations in this old world, but they are all over now.

Sleep on, sweet Grandmother; we know you are out of your suffering and troubles. We will come and join you in a little while.

A precious one from us has gone;
A voice we loved is stilled;
A place is vacant in our home,
Which never can be filled.

She was laid to rest in the Redwine cemetery of Hart county.

Written by her grandchild who loved her very dearly.