Last week I discovered the 52 Ancestors challenge issued by Amy Johnson Crow in January and after thinking about it a few days, thought I'd give it a try. I'm coming in very late to the challenge and don't know that I can post each week but I will at least attempt a post for 52 ancestors. It will also force me to get back to my genealogy blog which I've neglected far too long.

The first ancestor I'll blog about is my husband's grandfather, Charles Homer Murphy. He was a natural choice to me because my father-in-law is living with us right now and so I thought I'd take the opportunity to ask a few questions. 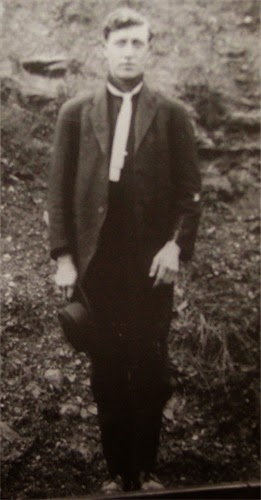 Charles and his family lived in Littleton (Clay District) in 1910. The census record shows that he can read, write, and speak English.

On December 16, 1914, he married Dessie Church, daughter of Robert Church and Lucinda Murphy, in Wetzel County. Charles was 29 and Dessie was 25. Together, they had five children—Ralph, Evelyn, Raymond, Glenn, and Earl—all of whom were born at home. The family lived near Fish Creek along the railroad tracks in Littleton.

Charles registered for the World War I draft on September 12, 1918 in New Martinsville, Wetzel County. He was 32 years old and lived in Littleton. His nearest relative was Mrs. Dessie Murphy of Littleton. Charles noted that he was tall, medium built, had blue eyes, and brown hair. He listed his occupation as “helper on tools” for the South Penn Oil Company, a company with ties to John D. Rockefeller that he would eventually retire from. Charles also worked for the Hope Natural Gas Company during his lifetime, a company formed by Mr. Rockefeller.

In 1920, Charles and Dessie lived in Wetzel County next door to her parents, Robert and Lucinda Church. Charles rented the house they lived in. 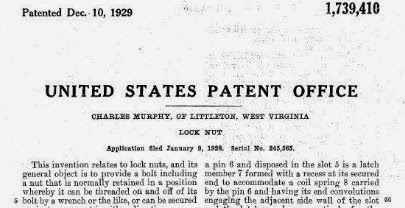 The 1930 census record dated April 5–7, 1930 shows Charles, Dessie, and all five of their children living in Littleton, Clay District. Dessie’s brother Presley Church lived three houses away. On April 16, 1940, the census record shows the entire family still living in Littleton. He owned the home which was valued at $850. 1940 was a tough year for the family. Charles was unemployed that year and Dessie died on November 20. Their oldest son Ralph helped raised the younger children after Dessie’s death, at least until he moved to Clarksburg.
﻿
Charles bought a Ford Model T which he drove to Kodol, West Virginia to deliver newspapers (only four or five papers!). He liked to drive the car up the West Virginia hills. One time the wheel fell off the car. He was able to stop the car but watched the wheel roll down the hill past the car. He fueled the car with drip gas. Model T’s were produced by Henry Ford’s Ford Motor Company from October 1, 1908, to May 27, 1927. We don’t know what year Charles’ Model T was or what year it was purchased.


Late in life, his son Glenn gave Charles a dog which he named Popeye. Charles loved Popeye and let him sleep in the bed with him all the time. Popeye was eventually killed when a truck ran over him.

Charles didn’t have hobbies. He worked and raised his children. After work, he ate supper, and then the family would play games such as Monopoly, cards (Hearts), or he would gather the neighborhood children in a circle and play marbles. Sometimes they would go fishing in nearby Fish Creek. The family would go to boat races on the Ohio River for fun.
﻿
Charles was the disciplinarian in the family but he never hit his children. He’d snap the belt to get their attention, but he never used it. Charles went to school but never graduated. He was not a religious person. He couldn’t afford to buy shoes so he cobbled the shoe soles for his family using leather he bought from the local hardware store. He would take the sheet of leather, sit down and mark out the foot, and then attach it to the shoe with glue.
In 1942, Charles registered for the World War II draft in Lewisburg, Greenbrier County, West Virginia. He lived in Littleton at the time. He listed his son Raymond of Littleton as the person who would always know his address. Charles was unemployed at the time. He was 5’ 11,” weighed 155 pounds, had gray eyes, brown hair, and a ruddy complexion. The record states that the middle finger of his left hand was crooked at the first joint. 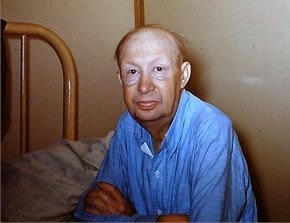 As Charles aged, he spent a lot of time in bed due to poor health. He died on November 16, 1949 at home in Littleton at the age of 64 after a brief illness. He had been plagued by heart problems for a long time. His funeral services were conducted on November 19 from the Littleton Methodist Church by Rev. H. J. Mitchell. Charles was buried beside his wife Dessie at Thomas Chapel United Methodist Church Cemetery in Wetzel County, near the town of Hundred. Surviving were four sons: Ralph of Clarksburg; Raymond of Washington, D.C.; Glenn of Littleton; and Earl of Warren, Ohio; one daughter, Mrs. Evelyn Bailey of Buckeye, Arizona; two brothers, William Murphy of Wheeling and Ed Murphy of Littleton; five sisters, Mrs. Cora Moore of Weirton; Mrs. Ella McDougal of Penn Groce, New Jersey, Mrs. Cecil Grims of Wheeling; Mrs. Ada Garrison and Mrs. Olive Fry, both of Littleton, and one grandchild. Rev. H. J. Mitchell officiated the service. Singers were Mr. and Mrs. D. E. Dent, Mrs. Margaret Antil, Mrs. Truda Byers. The pianist was Mrs. Gertrude Allender. The song selections were “Abide With Me,” “In The Garden,” and “Going Down the Valley.” Funeral arrangements were handled by Garrett L. Hunt of Burton, West Virginia. 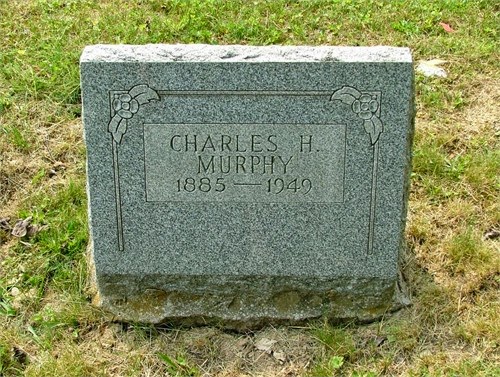 My husband, Charles, was named after his grandfather.
Posted by Denise at 5:26 PM