The New Year brings a new 52 Ancestors challenge by Amy Johnson Crow, this year with themes. I didn’t join in the fun until late last year—September 21, 2014 to be exact—so have only completed 16 ancestor blog entries of the first 52. Last week when I set Genealogy Goals for 2015 (for the first time ever), I decided that I wanted to continue what I started in September so as you can see, John W. Close Sr. is ancestor number 17. When I can, I’ll work Amy’s themes into an ancestor. As luck has it, John Close fits the bill of a “fresh start,” the theme for 2015 week 1.
John W. Close Sr., the son of James Close, was born on October 23, 1877 in Coatbridge, Scotland. I found the name of John’s father on a ship manifest record but haven’t found anything listing his mother’s name so she remains unnamed. Both of John’s parents were born in Ireland according to U.S. census records.

John married Margaret (AKA Maggie) Athya, daughter of James Athya and Jemima Durie, in Glasgow, Scotland on June 6, 1902. Together they had three children—James, Ina, and John W. Close Jr.

John’s first child, James, was born in Bellshill, Scotland in 1905. Daughter Ina was born in Scotland on Christmas Day, 1907.

It appears that John and his family left Glasgow via the S.S. Grampian in 1912. They arrived in Quebec, Canada on June 16. An Athya family member remembers hearing the story that they lent a large trunk to a neighbor and John had to tunnel through the snow to get the trunk back to come to the United States. Once arriving in Canada, they settled in Joggins Mines in Nova Scotia where they lived for two years.
﻿


In 1914, John left the family behind in Nova Scotia and traveled to America. He arrived via Class D at the Port of Vanceboro, Maine on July 9, 1914. He was 36 years old and was joining his uncle, William J. McCandler, who lived in Steubenville, Jefferson County, Ohio. John listed his father James of Coatbridge, Scotland as his nearest relative on the manifest. John was 5’ 7”, had a medium complexion, brown hair, and brown eyes. He paid for his own passage. His wife Maggie, son James, and daughter Ina left Nova Scotia and joined John in Steubenville in November 1914.

At the age of 40, John showed his allegiance to his newly adopted country and registered for the World War I draft in Steubenville. The year was 1917. His address was 641 Grandview Avenue Steubenville. He declared himself an alien, a citizen of Scotland. John was a first helper/open hearth at La Belle Iron Works in Steubenville.

John’s third child, John Jr., the only child born in the United States, was born in Steubenville on July 30, 1917.

On January 22, 1920, John and his family lived at 641 Grandview Avenue in Steubenville. John owned the house free and clear. The census record shows that the family immigrated in 1915 although we know from previous records it was 1914. John had already submitted his naturalization papers. The record listed the rest of the family as aliens. John’s native tongue was English and he was able to read and write. He earned an hourly wage working in a mill on heater furnaces. A divorced friend named Della Jarvis lived with the family.

On April 2, 1930, John, Maggie, and John Jr. still lived in the Grandview Avenue house. John W. Irvin and Norma Irvin lived with the family. John owned the home valued at $3,200. The 1930 census record listed his immigration year as 1914. John was a laborer in a steel mill.

On August 18, 1940, John and Maggie still lived in the Grandview Avenue house. Fifth grade was the highest grade that John had completed. He worked 32 hours a week as a scrap bailer in a steel mill. His income was $800 which I believe was yearly.

In 1942 at the age of 64, John registered for the World War II draft. He still lived in the Grandview Avenue house and worked at the Wheeling Steel Company in Steubenville.

John retired from the Strip Mill Department of Wheeling Steel Corporation in 1954. 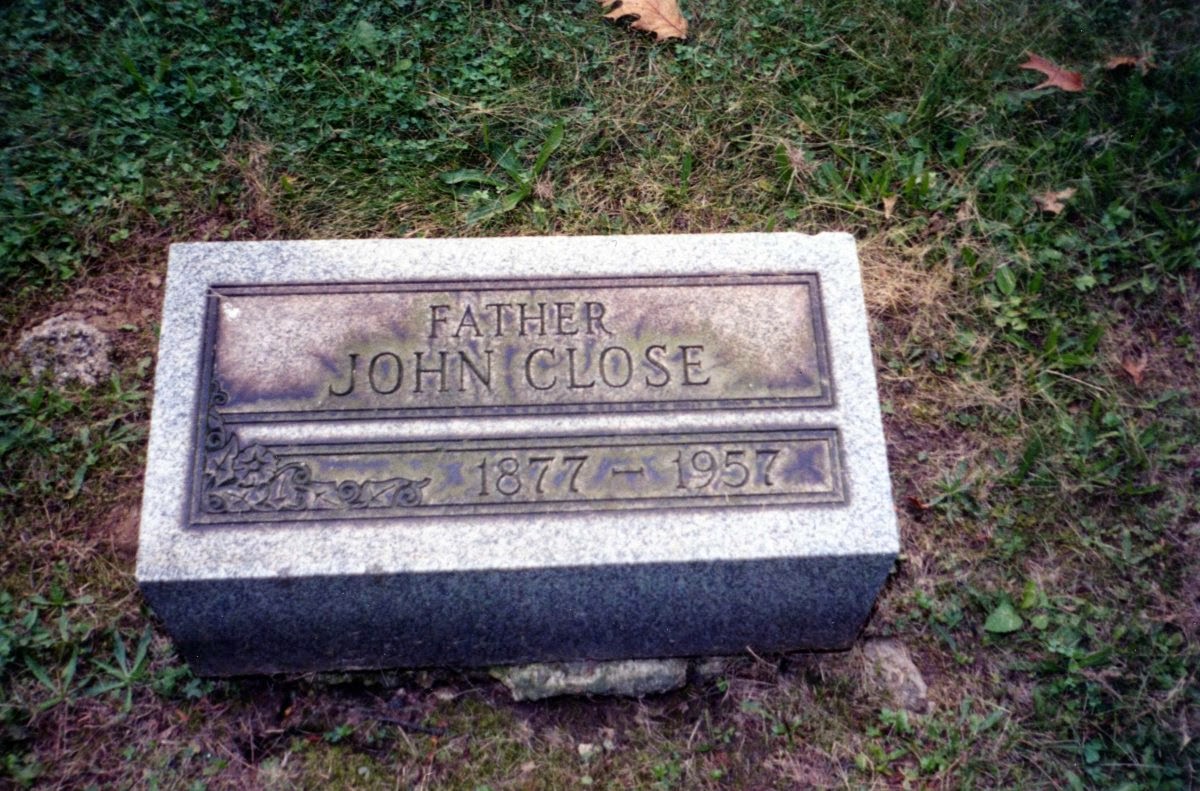 John died of lobar pneumonia on December 15, 1957 at the age of 80. His death occurred at the Ohio Valley Hospital in Steubenville where he had been a patient for 12 days. He was survived by his wife Maggie, son John Jr., his daughter Ina Close Schneider, and two grandchildren, John Carl Close and Shirley Jean Close. His funeral was held on December 18 at the Cole Brothers Funeral Home. The Rev. Dr. Charles W. Fulton officiated, followed by burial at Union Cemetery in Steubenville. His grave is located in section 31, lot 72.

John was a member of Westminster Presbyterian Church. I was told he lost half of one of his hands. He had a thumb, but no fingers. John used to play around and scare the little kids with his hand.

As far as I’m concerned, leaving your home in Scotland and traveling to America to live permanently constitutes a fresh start. I just wish I knew why he chose to make the journey.
Posted by Denise at 8:02 PM