The 52 Ancestors theme this week is “Commencement” and when I sat down to think about who I could blog about, Mary Lou Barnhart immediately came to mind. Several years ago I found a lovely photo of her graduating class from Greensboro High School so I figured why not share it. There may be other researchers looking for one of the students in her class.

Mary Lou Barnhart, daughter of Seaborn Brice Barnhart and Jessica Corinne Lankford, was born March 16, 1909 in Georgia (most likely Greene County). She was an only child.

On April 20, 1910, one year old Mary Lou lived with her parents on Watson Spring Road in the Branch division of Greene County, Georgia. Her father was an overseer on a farm. There were two servants living in the home, John Jorden and Willie Cosby, both farm laborers.

On January 20, 1920, Mary Lou and her family lived in Penfield, Greene County, Georgia. Her Uncle Vincent Thomas Langford, his first wife Maude, and their five children lived four doors from them.


Mary Lou graduated from Greensboro High School in Greensboro, Greene County, Georgia in 1927. She then attended Georgia State College for Women in Milledgeville, Baldwin County, Georgia, graduating in 1931. The photo at the beginning of this blog entry appeared in the college yearbook in 1929, her sophomore year. 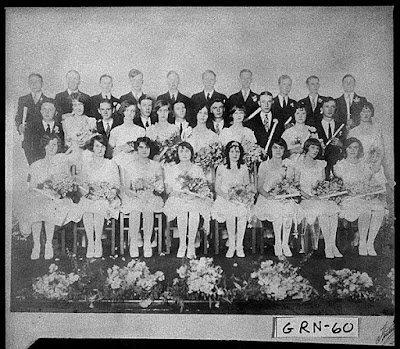 On April 23, 1930, Mary Lou and her family still lived in Penfield. Her widowed great-aunt, Nannie Lankford, aged 77, lived with them.

On April 11, 1940, Mary Lou and Grady lived on South Street in Greensboro. Mary Lou was a grammar school teacher. Their son Grady Jr. was born in Greene County on September 19, 1940.

I’m glad I decided to blog about Mary Lou. After finding her college photo/information, I realized I had posted incorrect information for her son, Grady Jr. Mary Lou was still in college when I had her giving birth to Grady Jr. I’m sure she wouldn’t appreciate me portraying her as an unwed mother when that wasn’t the case!