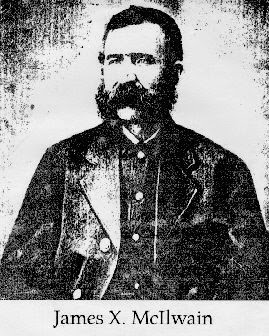 James Xenophon McIlwain, son of John McIlwain and Jane Gordon, was born in 1831 in Apollo, Armstrong County, Pennsylvania. He was the second child of four born to John and Jane—Margaret, James Xenophon, Eva, and John S. McIlwain. James was born with red hair.

James’ sister Minerva Smith died on May 17, 1850 in Apollo from cholera, four days before her first birthday. She was buried at Riverview Cemetery in Apollo.

On November 7, 1850, 19 year old James lived in the home of Robert O. and Margaret Hunter in Apollo. James’ occupation was saddler. There was another young man, 25 year old James P. Moore living in the home who was also a saddler.

James joined the Apollo Presbyterian Church on April 28, 1858 and was baptized as an adult.

The Civil War began and on June 8, 1861, James enlisted for a period of three years in Company G of the 11th Regiment Pennsylvania Reserve Infantry (40th Infantry Regiment Volunteers). On May 18, 1862, General Meade ordered that James be assigned extra duty as a brigade saddler. James wrote home frequently to his wife Emma. He often wrote of sending money home to her. He sent money home once but didn’t want to send more until he received a letter from her acknowledging receipt. Emma was illiterate and had to count on others to write her letters. Her sister-in-law, Electra Smith, often filled that role. Electra and James corresponded regularly as well. In 1862, James wrote to Emma about being tired of government feed and how he wanted a good meal of new beans, tomatoes, and cucumbers. James returned to his unit on June 8, 1864 and mustered out at Pittsburgh, Pennsylvania on June 13.

On May 14, 1865, James received a letter from Emma informing him of the death of their daughter Jennie. In the letter, she told him that Jennie had gone to join their little Frankie who had apparently died a short time before Jennie. Emma’s letter was full of grief, which she bore alone following the death of her two children, with James away due to the Civil War. Years later, Don Frost of Rolling Meadows, Illinois, most likely a descendant of James, wrote that James was not home from the war yet because he was “serving time in the stockade for being drunk on guard duty.” Mr. Frost was editing a collection of James McIlwain letters and apparently had a copy of the May 14 letter.

On June 25, 1880, James and his family lived in Apollo. James still worked at the saddlery as a saddle and harness maker. His 20 year old son Xenophon still lived at home and worked as a plasterer.

James died on August 4, 1883 after falling from scaffolding on the job in Apollo. His heirs purchased a plot at Riverview Cemetery within sight of the John McIlwain, Jane Smith, and John T. Smith plot in Apollo.


This family photo was taken ca. 1898 at the McIlwain homestead in Apollo, well after James’ death. 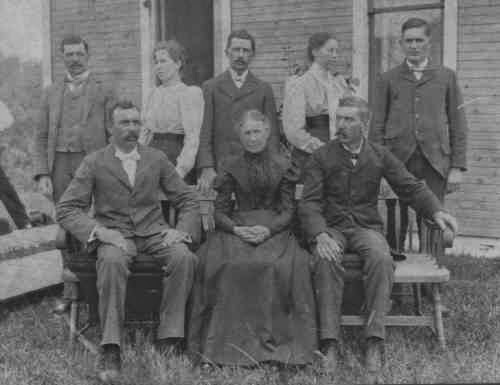