The photo of the sailor to the right is another find from my father’s house last week so I thought it appropriate to blog about him this week.

On May 10, 1930, one year old Walter and his family lived in Oakland, Greene County, Georgia. His mother was 19 years old so that meant she was 18 when she had Walter. His father, age 32, was a laborer in a mill. Walter’s uncle Frank McEver and aunt Lula McEver (sister to Frank and Brice) lived next door.

On April 30, 1940, Walter and his family lived in Penfield, Greene County, Georgia. His father was a laborer in a school building. On October 20, 1948 just before his 20th birthday, Walter enlisted in the U.S. Navy.

After eight years of service, Walter was released from the U.S. Navy on November 16, 1956.

Walter’s mother Eleanor died in Fulton County, Georgia on April 25, 1963. His father died in McDonough on May 8, 1976. Both were buried at Salem Baptist Church Cemetery in McDonough.

Walter died on January 4, 1988 of emphysema at the age of 59 in Atlanta, Fulton County, Georgia. He lived in Henry County at the time of his death. Walter was buried in the family plot at Salem Baptist Church Cemetery. He never married. 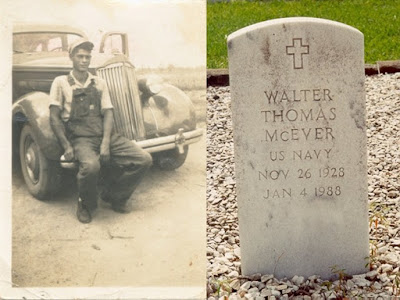