On June 12, 1900, Marion and her family lived in the Branch District of Greene County with her widowed grandfather William Harris McCarty. The census enumerator recorded her as William’s grandson, William M. George, although he put an “F” in the “Sex” column.

On April 15, 1910, the family lived on Main Street in Penfield, Greene County, Georgia. Marion’s grandfather William and her uncle Hayden George lived in the home with them. Marion’s mother gave birth to a daughter, Gussie O. George, on May 12, 1910 in Greene County. Baby Gussie died on July 31, 1910 and was buried at Penfield Cemetery in Penfield. On September 19 that same year, Hayden married Lillie Della Lankford, sister to my great-grandmother Alice Beman Lankford.

On January 19, 1920, Marion and her family lived on Bowling Green Road in Stephens, Oglethorpe County, Georgia. She was enumerated as Willie M. George. Although Marion was 21 years old at the time, she was not working. Her father was an operator in an auto garage. Marion’s grandfather William McCarty, now 77 years old, was still living in the home with the family.

By April 25, 1930, Marion and her family had moved back to Penfield. Marion was 27 years old and not working. Three siblings were still in the home—Mary Lou, James, and Guy. Her father supported the family as a farmer with the help of James, a laborer on a farm.

Still at home at the age of 40, Marion and her family lived at Penfield and Woodville Roads in Penfield on April 13, 1940. The enumerator didn’t list an occupation for Marion. Her brother James and his wife Thelma lived in the home as well.


About 1972, Marion married John Wesley Herrington from Greshamville, Greene County, Georgia. She was 73 years old and this was her first marriage. I’ve been told John had been married several times before Marion but I only find a record for one wife—Willie Bea Strickland, who died in 1963. Willie must have been a common name for a woman in the late 1890’s as I see that both women had that as their first name. John died in Greene County on February 19, 1981 and was buried at Greshamville Cemetery in Greshamville with his previous wife Willie. 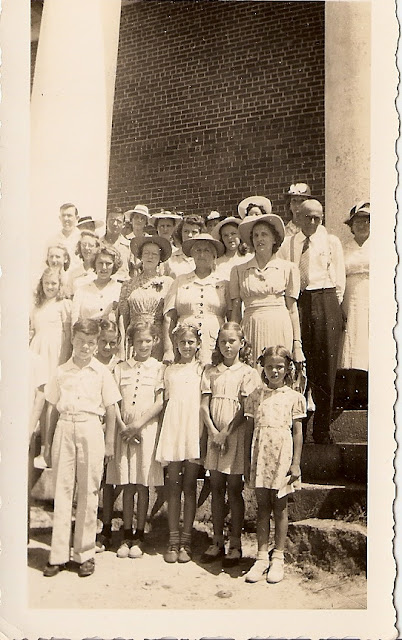 Marion died in Penfield on February 16, 1982. She was buried at Penfield Cemetery along with other family members. Her tombstone reads Willie Marion George and does not list her married name.

The group photo was taken on the steps of Penfield Baptist (old Mercer) Church. The third woman in the second row (center) is Marion George. Her mother Gussie is in the back row just above the left side of Marion's hat brim. 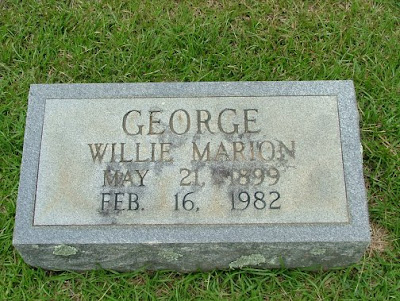